Why you should always read the fine print. A legal loophole in the the Griz/Lakers trade is sending Pau back to Memphis and Marc to Los Angeles.

Representatives for the NBA released legal information this morning about some particular offset language in the Memphis Grizzlies/LA Lakers 2008 trade that sent Pau Gasol to Los Angeles in return for Kwame Brown, Javaris Crittendon, Aaron McKie, the rights to Marc Gasol and two first round draft picks.

Because of some fine print that went unnoticed in 2008, Memphis will have to agree to legal terms that bind the Grizzlies in the offseason to trading Marc Gasol and two protected first round picks to the Lakers in exchange for Pau Gasol and a second round pick. 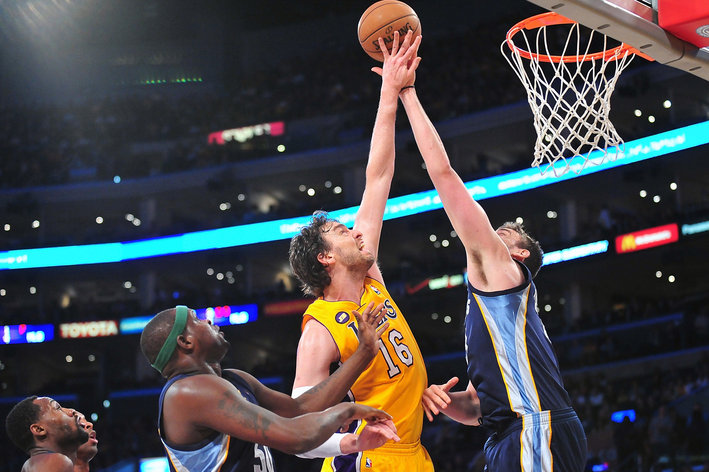 Attorneys for the Lakers claim an Addendum for Restitutio in Integrum that sends Pau Gasol and a second round pick back to Memphis and Marc Gasol to the Lakers for a sub judice adjusted salary contract of 4 years/$14 million while the Grizzlies will be forced to extend a $19 million player option to Pau. If Pau were to pick up this option in addition to Zach Randolph picking up his option then the Grizzlies could be on the hook for over $36 million for power forwards alone next season.

This puts the Grizzlies in a huge bind as they attempt to retool their team strategy around aging-frontcourt players past their prime. The loss of those two first round picks is huge as well, although there's a good chance the Grizzlies would have squandered them anyway. At least one person seems excited about this mess:

The one thing I can take solace in right is that maybe there's a snowball's chance in hell that the Grizzlies take that 2nd round pick and haul in a player who makes as big an impact as Marc Gasol did with that 2nd round status. As for the rest of you reading, you should definitely be able to take solace in the fact that it's the first day of April and that absolutely none of this is true. Happy April Fool's Day! ; )