3 games remain for the Memphis Grizzlies in the 2013-2014 Regular Season, and each one will be more important than the last. Finishing the campaign with a 5-0 win streak going back to the Miami Heat game would mean a certain 7 seed, avoiding the Spurs. That is the goal of these Grizzlies, and the mission continues tonight against a Los Angeles Lakers team with more motivation to lose than to win.

For the Lakers perspective, check out Silver Screen and Roll.

There is nothing better than being able to control your own fate.

Thanks to a timely resurgence and the San Antonio Spurs defeating both the Dallas Mavericks and Phoenix Suns in recent days, the Memphis Grizzlies find themselves in a good position. 2-1 over these last 3 games puts the Memphis Grizzlies in the playoffs, a dream achieved that seemed so far away during the tanking talks of just 4 months ago. However, just 2-1 puts you in the 8 seed, playing against the remarkable San Antonio Spurs. You win 0% of the games you never play, but even the most positive Grizzlies fan must acknowledge that the season would likely end much like last season's did.

If the Grizzlies go 3-0, however, then suddenly they would jump in to the 7 seed, avoiding San Antonio until a possible Western Conference Finals rematch and leading to a Oklahoma City Thunder match-up in the first round. In the unlikely event the Golden State Warriors lose their last 3 games (@POR, MIN, @DEN) a 3-0 Grizzly record would mean the 6 seed and a rubber match with the hated Los Angeles Clippers.

So, while the playoffs are now a 76% likelihood according to ESPN's Hollinger Playoff Odds, there is a big difference between 2-1 and 3-0 for these Grizzlies. You cannot go 3-0 over this stretch without going 1-0 tonight, though, and the Los Angeles Lakers will compete even though they are limping to the finish line with little to play for. Memphis must take this game seriously and not look ahead to a possible playoff-clinching game in Phoenix tomorrow night, or a possible 7-seed playoff game Wednesday vs. Dallas.

The Lakers are currently in the midst of a 6 game losing streak. During that abysmal stretch, Lakers opponents are scoring the ball at a remarkable clip. Opposing teams have scored 107 twice, 112, 120, 124 and 145 points in those 6 games. Here is how opponents have been shooting percentage wise during the streak. 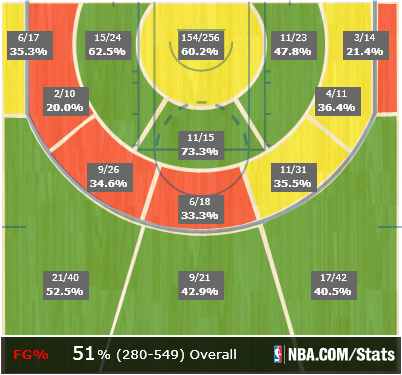 Opposing teams surprisingly have shot about the same against the Lakers in the paint compared to season numbers, but from just outside the paint and from three point land teams have been crushing the Lakers. The Grizzlies' inside-out game should be quite effective this evening; Jordan Hill is the only healthy and steady big man, so the Grizzly front court should dominate the area in and around the lane. From there, if wings collapse to help there will be opportunities for Mike Conley, Courtney Lee and Mike Miller to drain some 3 point shots.

Over the past 6 games, the Lakers' defensive efficiency is 114.5. Memphis should have a field day with this defense.

When the Lakers are on offense, they are going to push the pace (2nd fastest in the NBA this season) and they are going to launch 3 point shots (29 attempted threes over the past 6 games.) Nick Young, in all his swagginess, is launching 9 threes a game himself and hitting them at a 42% clip during the last 6 games. Jodie Meeks has given the Grizzlies fits this season; here is his shot chart against Memphis in 3 games. 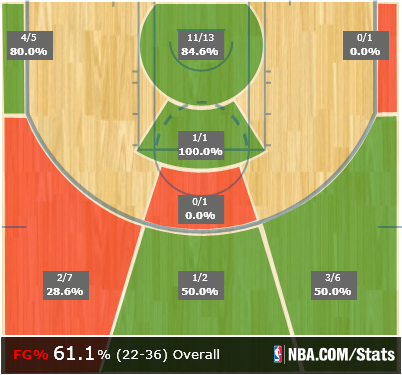 61% overall shooting, 11-13 from inside the paint. Wesley Johnson is shooting 44% from beyond the arc over the last 5 games and even Ryan Kelly could create issues as a stretch 4, forcing Z-Bo to go out where he is not as comfortable defensively on the perimeter. Memphis must limit the range of the wings and contest these three point shots, otherwise while the Grizzlies should win this game the Lakers could keep it too close for comfort.

The Los Angeles Lakers are playing out the stretch with very little reason to win outside of personal pride. L.A. still has a chance at improving their lottery odds, and with injury issues galore this roster is depleted and most likely exhausted. Memphis must not give them any reason to believe that they can win this game. Within the first 8 minutes the tone for the night needs to be set by the starters; attack the rim and put this weakened roster in foul trouble, play stifling defense and limit their strength of three point shooting, making it a weakness as they launch contested long range jumper after contested long range jumper.

Memphis has to dominate from the outset and eliminate all hope for the Lakers.

Hope is a powerful thing. It has powered this run back into playoff contention for the Grizzlies, to an extent. Memphis must squash the hopes of winning this game for the Lakers and instead have them hope for better odds at Andrew Wiggins or Jabari Parker.

On the most recent Grizzly Bear Blues Live (which you can listen to here) I predicted a 4-0 end to the season, and I am not jumping off that train any time soon. Necessity is the best form of inspiration, and the Grizzlies need that 7 seed to give themselves a better puncher's chance at a postseason run. Expect a great Mike Conley game, the bench to dominate the Lakers' reserves and some good rest time for the starters in the 4th quarter heading in to the most important game of the season in Phoenix tomorrow night.