Playoffs, Draft Picks, and How We Think About Fate as Memphis Grizzlies fans

We talk about the talent gap between the Conferences, the yield of a draft pick, and why NBA fans are Calvinists

Share All sharing options for: Playoffs, Draft Picks, and How We Think About Fate as Memphis Grizzlies fans

We've heard all year long about the talent chasm between the Eastern and Western Conference. The West is a post-apocalyptic world in which the strong eat the weak. Meanwhile the East is left to scream: "This is unfair. I feel like everyone should be the same size." This has created an oddity in the draft order for next year that affects the Grizzlies future. Missing the playoffs guarantees a team has a top fourteen pick, and even the very best teams that miss the playoffs have a chance (albeit a less than 1% chance) at a top three pick.

Anyone regretting the Calathes/Wroten switch?

Tony Wroten may have some upside in youth and athleticism, but Nick Calathes has been the supremely better choice for the 2013-14 Memphis Grizzlies.

Listen to the latest episode of GBBLive!

Anyone regretting the Calathes/Wroten switch? Listen to the latest episode of GBBLive!

Teams that make the playoffs are then slotted according to record. Most years this plays out with the 8 seeds picking 15 and 16, but this year is strange. The West is so much better than the East that the Grizzlies, even if they finish 8th, may have a better record than the 3 seed in the East. As such, making the playoffs can potentially cost the Grizzlies seven slots in next year's draft, or a slide down over 23% of the entire first round.

Tired of Tanking? Me too.

We talked about "tanking" a few months ago, back when that idea didn't sound quite so ridiculous. Thankfully, that discussion can be put to bed. With just two games to go, the Grizzlies control their own destiny. Win out and they get the seven seed. But would the Grizzlies be better off, in the long run, if they were to miss the playoffs this year? Would moving up seven spots in the draft snag the Grizzlies a difference maker that would make up for missing the playoffs?

Of course not, but this question has been talked about so let's hear it out. When we talk about draft picks, we often talk about the success stories. Ryan Anderson and Rajon Rondo were picked 21st. Getting one of them would be great! But Peja Stojakovic was picked 14th! He's an all-time great shooter, and we all know the Grizzlies need shooting.

While we talk about these success stories, we ignore the long list of also-rans, never-were's, and forget-me-immediately's. In the below graph, we've plotted the average career win shares generated by each draft pick 1st through 21st (since 1976). The results shows the story we'd expect. 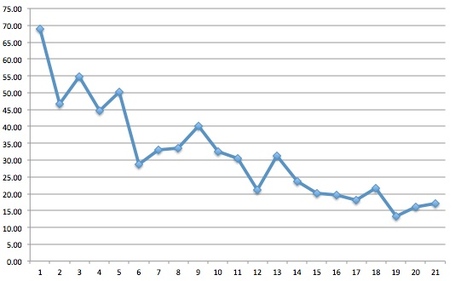 High picks are good. Low picks are not. Picks in the top five are likely to produce stars. Picks in the top ten are fairly likely to produce good players. After that it gets dicey. Though the 13th pick has outperformed the picks around it - even in a sample of 38 years, there is still some noise - the gap between the 13th and 14th pick (eight win shares) is bigger than the gap between the 14th and 21st pick (six win shares). In other words, moving up one spot from 14th means more, historically speaking, than moving up 7 spots from 21st.

We've heard so much about the value of draft picks lately, that we've forgotten that they are essentially lottery tickets.

The draft follows a pretty smooth downward curve towards irrelevance. For every Rondo and Peja, there is an assembly line churning out William Avery, Michael Dickerson, and a whole slew of others. The marginal value of each pick decreases the further you get from the top. Good basketball players are a rare commodity, and getting first crack at them means a ton.

We've heard so much about the value of draft picks lately, that we've forgotten that they are essentially lottery tickets. Even in a deep draft, all you have is a chance. Even if the Grizzlies are better than average at predicting which amateur players will make good NBA players (and with a new management team, and the NBA generally becoming smarter, there is little evidence to suggest they are), the chances are slim that they will find a player that will come in and produce.

And that's what this team needs. Every new player must take minutes from an incumbent. That means they better be pretty good already. Truth be told, it is not likely that the 14th or 21st player taken in the upcoming draft is good enough to get significant minutes on a perennial 50 win team. That isn't shocking. That's a matter of fact.

Calvinism: The NBA Religion of Choice

I get the idea that Grizzlies fans don't want to see their team lose to the Spurs again. We act as if that fate is written already, and we are just turning the pages of a story we've already read (we kinda did read it last year).

We NBA fans tend towards Calvinism when it concerns our team's fate. The game of basketball walks in that nearly perfect light where the future seems apparent. The game is shaped by large forces, and we know them all to well. We know that Lebron James will make the playoffs, and be there for a while. We know Russell Westbrook will contort a game to his arrogance (sidebar: he should). We know Tony Allen will breed chaos on the hardwood, and Tayshaun Prince malaise. ZBo will show Blake Griffin fear in a handful of throat dust. Marc Gasol will show us grace, and James Johnson violence, and Mike Miller coming around a screen, dribbling twice to his right, will release a jump shot near the top of the key with such a smooth rhythm it feels like going home again.

The game gives us just enough certainty - soothes us with just enough familiarity- that we feel like we know what will happen next. But then what happens next happens now, and we remember that we know nothing.

We may not want to suffer through the Grizzlies being walloped by the Spurs, and we may pray to the basketball gods for that cup to be lifted from our heads. But nothing is written. The Philadelphia 76ers faced long odds as an 8 seed two years ago, facing the juggernaut Chicago Bulls. Then Derrick Rose blew out his ACL, and the 76ers came one game away from making the Conference Finals. The Grizzlies faced long odds three years ago as an eight seed. Manu Ginobili picks up an injury, ZBo hits a three, and suddenly they're a game away from the Conference Finals themselves.

The Grizzlies made the Conference Finals last year only because Russell Westbrook got hurt (okay, Vinny Del Negro being the Clippers head coach had something to do with it to). Strange stuff happens all the time.

But we forget this all too quickly, usually around the time the next game starts. We forget that anything can happen. I don't know why, but we do. Maybe feeling like we know what comes next makes us feel better about what's happening now. Maybe twitter has sapped us of our long term memory, and we are closer to living life like the dude from "Memento" than we realize (if you're not on twitter then you have no excuse. Get your head checked immediately). Maybe it's just a problem for smart people to figure out. We don't know, and that's the point.