This season has been a test of the wills of both Grizzly and fan alike. High and lows, injuries and health, tanking and playoff clinchers. Tonight, the next and final step toward playoff positioning is taken in the FedEx Forum as the Memphis Grizzlies welcome the Dallas Mavericks to town. The Grizzlies will have to fight until the bitter end to avoid a trip to the San Antonio Robots Spurs.

For the Dallas perspective, check out Mavs Moneyball

81 games is a lot of basketball.

3,888 minutes (not including overtime). 233,280 seconds. Over the course of five and a half months, a plethora of moments, both good and bad. Moments where fans held their collective breaths, laughed together, cried together. Times where the team was hitting its stride, where the future seemed dark and dreary, where all, even for some of the biggest believers, allowed doubt to creep in to their consciousness.

Let the Sun shine in, Grizz nation. Your boys are have made the playoffs for the fourth straight season, warts and all.

Even with the sense of accomplishment that accompanies such a feat, there is still one more game to be played; a game that is just as big as the last, if not bigger. The Dallas Mavericks, who are 3-0 against Memphis this season, are in the Bluff City and the stakes are high. Win, and you achieve the 7 seed and avoid the dominant San Antonio Spurs (only 4 losses since the All-Star Break) until a possible Western Conference Finals rematch. While Kevin Durant and company are no slouches themselves, the likelihood of defeating a couple of great players is higher than defeating the tremendous Spurs machine.

So, both Dallas and Memphis should be just as invested in game 82 as they were the game that clinched them their playoff births. The Grizzlies must fight to the finish if they hope to improve their odds heading in to the war of attrition that will be the Western Conference Playoffs. It has been a tumultuous journey, but the road to an NBA championship is going to be just as long and winding. The playoffs, for all intensive purposes, started Monday night in Phoenix. They continue tonight.

So much of tonight's game will come down to will and the ability of Memphis to limit the effectiveness of the Mavs scoring machine.

Three keys to a big win that will mean a 5 game winning streak to end the regular season.

In their 3 wins over Memphis this season, the Dallas Mavericks have shot on average over 31 free throws per game. Of teams the Mavericks have played 3 or more times, this is the highest average free throw attempts. Dallas, on average, shoots 79.5% from the free throw line. Do the math; if this trend were to continue tonight, Dallas would get 25 made free throws, easy buckets for an offense that doesn't need any help to score.

On the flip side of that, of the teams Dallas has played 3 or more games against and has a losing record (LAC, GSW, DEN, MIN, SAS) the free throw attempt average falls to 18.1 per game, 13 less attempts than what Dallas averages against the Grizzlies on the season. That is 13 fewer chances for Dallas to score without a defense hounding them, and using their season average that is 10 less points for the Mavericks' high efficiency offense.

The Grizzlies must place an emphasis on defending with their feet more than their hands or bodies. Keeping shooters and dribble penetration in front of them and rotating help at the right times will eliminate charity stripe chances for the Mavericks and make their potent offense a little less formidable.

On last week's Grizzly Bear Blues Live, Kirk Henderson of Mavs Moneyball discussed the awesome season that Dirk Nowitzki is having, and it truly is impressive. He was the only starter with a positive +/- in the Mavs' most recent game against the Phoenix Suns despite Monta Ellis' 37 points, and is on a dominant shooting pace. He is close to being a member of the elusive 50% field goal/40% three point/90% free throw club, and in 7 games in April he has been scalding hot from the field. Here is his shot chart. 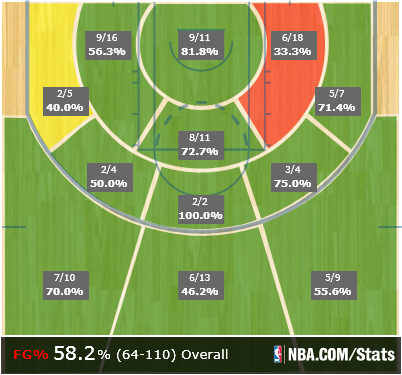 It does not get much more efficient than that over a 7 game span. Dirk is hitting on all cylinders offensively, and it couldn't come at a better time for the Mavericks. In order for Memphis to win this game, they must make Dirk as uncomfortable as possible; force him to work hard defensively through some Z-Bo and Marc Gasol bully ball and limit his perimeter effectiveness by not helping off as much on him. Contested jumpers are ideal, and players such as Tayshaun Prince and James Johnson would be ideal covers for Dirk, whose range could be negated by their length and athleticism, respectively.

The Dallas Mavericks' starting center, Samuel Dalembert, has had some good games this season, especially against this Grizzlies team (he had a double-double the last time they met in February.) However, he only averages about 20 minutes a game and those minutes and his effectiveness especially dwindles in the second half and fourth quarter. Dallas Head Coach Rick Carlisle depends on 26 year old Brandan Wright out of North Carolina to be his center as halves and games end.

Despite his height (6'9"), he has been explosive in this role. This has paid off for Dallas; his offensive and defensive impact is off the charts in the fourth quarter. Wright's defensive efficiency in the fourth quarter of games is a solid 106.1, he is a tough defender in that his length and athleticism create issues for players who are a bit fatigued late in games and his offensive explosiveness is quite impressive. Here is his 4th quarter shot chart for the season. 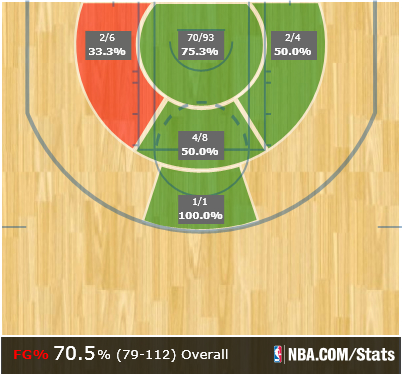 75% in the paint. Truly impressive; he finishes at the rim as well as anyone in the NBA in late game situations. The key for the Grizzlies is to not allow for him to be in the paint; whoever he is defending needs to go after him both in and outside the lane, utilizing their post skill set or movement in the case of Kosta Koufos or Ed Davis to get him in to foul trouble. Marc Gasol and Zach Randolph especially must not allow Wright in to the lane; make his roll off of the pick and roll more complicated and throw off the timing of sets while boxing him out and not allowing second chances. Limiting Wright's effectiveness will throw off the Mavericks' fourth quarter mojo.

Yes, Memphis is 3-12 vs. the Southwest division so far this season. Yes, they are 46-20 against the rest of the NBA. Yes, the Mavericks are 3-0 against this Grizzlies team and feature tremendous offensive weapons and a top-5 NBA coach to boot. This game will be won in the trenches and through the energy of the FedEx Forum; when the "Grindhouse" is rocking, there are few places that can compare to the home court advantage it can provide. Expect a playoff atmosphere and intensity from the Grizzlies faithful that will feed Memphis on the court.

Mike Conley and Tony Allen will have big games, Dirk will be contained, not stopped, the Grizzlies will defend without fouling and Memphis will prepare for a match-up with the #2 seed this coming weekend.