We look at Serge Ibaka's Shooting, Slovenians, and the Memphis Grizzlies Being {gasp} a Model Franchise.

6). Will Serge Ibaka Miss Every Jumper He Takes Again? – Not likely. Serge is one of the very best mid-range jumpshooters in the league. After hitting 51% in the 2012-2013 Regular Season, Ibaka made just 31.6% in the playoffs. 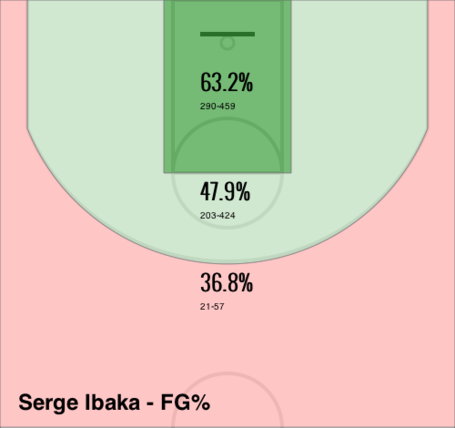 Ibaka is a great shooter. We can attribute some of Ibaka's cold shooting in last year's playoffs to great defense, but many of the shots he missed were wide open. He slumped at the worst possible time. Chances are, it won't happen again, especially not when he doesn't have to shoulder a significant scoring load.

7). Will Durant and Westbrook sit at the same time? – If you have two of the best ten guys in the league, both of whom are capable of playing forty minutes a night, they really shouldn’t. But even a minute of such time can be damaging for OKC, whose offense will suddenly be relying on the likes of Reggie Jackson, Serge Ibaka, and {gulp} Caron Butler.

Grizzlies are ready to play spoiler

The Grizzlies were left for dead after a poor start, but somehow rallied to win 50 games and make the postseason again. Last year's Western Conference Finalists are now the conference's most dangerous lower seed.

Grizzlies are ready to play spoiler

With neither player on the court, the Thunder offense craters. scoring fell by 10.8 points! To put that in perspective, the Thunder are the NBA's 7th best offense when either Westbrook or Durant plays. That decrease of nearly 11 points drops them to 2nd to last in the NBA, ahead of only the Philadelphia 76ers.

So unless Scotty Brooks thinks being the equivalent of the 76ers on offense is a good thing, he should never sit Durant and Westbrook at the same time.

8). Slovenian Person Who is Happiest Memphis Is NOT Playing the Clippers – With all due respect to Beno Udrih, it's my wife. Those 10:30 EST start times are brutal on someone who’s AT work at 6:00 am. Last year, she fell asleep to the soothing sounds of Chris Paul flopping, Blake Griffin receiving choke-slams, and Marc Gasol dishing from the high post.

She’ll be Gritting and Grinding through another playoffs…. Probably in a Chris Vernon shirt.

But back to Beno Udrih for a minute. He has been more than I could have ever hoped for on twitter. @benoUdrih1 is a revelation of GnG and I don’t even hold it against him he looks a little like an Eastern-European version of Juan Pablo from the Bachelor.

9). Who is the Role Player Grizzlies fans Will Grow to Hate – The playoffs magnify everything. Stars will shine, or fade, or go supernova. Legends are written, unraveled, and written again. Inevitably, an unlikely hero emerges. Someone who had been relegated to the edges of our consciousness, comes crashing to the fore, and swings a game and perhaps even a series. Fans on the receiving end of an unlikely performance spew vitriol. So, who will be the new Reggie Evans, Gary Neal, and Nick Collison:

Steven Adams – carved from granite, Valyrian steel, or an unholy amalgam of the two, this man is no man. He is God speaking to us through solid rock.

Jeremy Lamb - The only reason I have sympathy for a guy who gets to play basketball while being wide open all the time (being an unproven rookie next to Durant and Westbrook will have that effect) is because Lamb looks a little like Dukie from The Wire.

Derek Fisher – Fisher just drives me crazy. I've always hated the way he shoots the ball with his entire body.

Nick Collison – Maybe Nick Collison is the new Nick Collison. He has given ZBo problems numerous times, sets solid picks, and is crafty enough on offense so the Grizzlies can't disregard him. Also, he is an excellent photobomber.

10). The Memphis Grizzlies: A Model Franchise – The Grizzlies have been slow to shake the national skepticism. In the wake of the Pau Gasol trade, the Grizzlies were a laughingstock.

But here are the facts. The Grizzlies have been in Memphis for thirteen years, and more often than not, they have made the playoffs.

The Grizzlies have made the playoffs four consecutive years, no easy feat. In fact, only six other franchises can boast such a record: the Spurs, Thunder, Heat, Bulls, Pacers and Hawks. That’s less than a quarter of the league.

Get ready for the playoffs

The Grizzlies are a small market team without the benefit of an NBA all-time great like Lebron James, Tim Duncan or Kevin Durant. Many times this is used as a strike against the Grizzlies playoff chances, but let's be frank about something. It's really hard to be this good during the modern era of the NBA without a generational talent. Contracts are shorter, players are shuffled like cards in a deck, and teams are constantly realigning their priorities, and sometimes this means not making the playoffs. The Grizzlies have enjoyed more success than most, and we should start to think of them that way. The Grizzlies are no longer an underdog (though in this series they most definitely are). They are one of the best teams in the NBA, have been for a while, and will likely continue to be for at least a few more years.

No matter the outcome of this series, this season was a success. This team weathered a slew of injuries to key players, a rookie head coach, and arguably the most competitive playoff hunt ever. I've never been a huge "Championship or Bust" guy. I don't mean to suggest that the Grizzlies shouldn't be building to a championship at all times, nor do I suggest keeping the gang around for old times sake. Every year is judged in a vacuum. No two are the same. Labeling this year as a failure would be to ignore the incredible amount of injuries, pressure, doubt and growth this team faced. I will always be proud of the 2013-2014 Grizzlies.