No More Streaking: How to Steady Courtney Lee

As Memphis continues to scrape and claw in and out of the Western Conference playoff picture, naturally attention turns to who will lead the way. If the Bears of Beale Street hope to make some noise the last 2 weeks of the season and beyond, the efforts of one Courtney Lee will play a huge role.

Share All sharing options for: No More Streaking: How to Steady Courtney Lee

Who do you think of when you think of the Memphis Grizzlies? Is it their massive Spaniard Marc Gasol? Or maybe "The Grindfather" Tony Allen? How about Mike Conley, the longest tenured Grizzly on the roster, or Zach "Z-Bo" Randolph whose court physicality is second amongst Memphians to his wonderful off court contributions to the Bluff City. Tayshaun Prince and James Johnson have been at the center of the season's latest playing time drama, Mike Miller returned this season to Memphis and has played well, Kosta Koufos and Nick Calathes have developed and played well. Every Grizzly has a season storyline attached to them in some way.

Although he has been here the least amount of time, the newest Grizzly Courtney Lee also has a story. That story also connects throughout his career. The Shooting Guard officially entered journeyman as he joined his 5th team in 5 seasons through the trade that send Jerryd Bayless to Boston in return for Lee. More often than not, a player who has played for that many teams so soon in a career has some sort of stigma attached to them.

Courtney Lee has an opportunity to re-write his story in Memphis.

For Courtney Lee, that is that he is a bit streaky. He was a player who some knew was likely high on this front office's list of players they coveted due to their history with him (Stu Lash and Jason Levien used to represent Lee when they were agents), and folks knew after a simple Google search that he was a good perimeter scorer and that he wasn't playing much in Boston. Whether it be statistics or playing time, Courtney Lee was a streaky player.

Courtney Lee is now the Grizzlies' starting shooting guard due to a good streak of games upon his arrival and his skill set, leading to Tony Allen coming off the bench in a great role for him; chaos creator. While Marc Gasol's return to the lineup obviously gets most of the credit for the Grizzly resurgence, Courtney Lee's arrival just 3 games before Big Spain's first game back vs. the Oklahoma City Thunder January 14th deserves some attention as well. Just look at his numbers for the season by month up through January and February, a period of time that saw the Memphis Grizzlies go 19-8 overall.

Pretty impressive, and the green means that Lee is above his season average in a vast amount of categories during that stretch. The biggest difference, of course, was in minutes, and the increased role led to increased production.Lee clearly was excited to be on his new team, and that especially showed in February. He played an average of 35 minutes a game and was taking a season high 11 shots per game. His percentages were down, but otherwise great production in increased time. His offensive impact was well chronicled here on this site, and all seemed right with the world. He was on a good streak.

Then, all of this took a turn for the worst in March. Here are his numbers during the month that C-Lee would likely like to forget sooner rather than later.

Shooting percentage overall improved, 3 point shooting was about the same, but production in other categories was lower. Lee has often been viewed as a streaky shooter, a guy who can come and go as the wind blows with his game. The question becomes, how do you defeat the stigma and end the streakiness? Memphis, in order to be a player in these final 8 games and beyond in the tough Western playoff picture, needs him to be on far more often than off. Lee was brought in to be the great equalizer, providing spacing and athleticism that Tony Allen just can't consistently provide.

So where can he find himself and continue to be that 4th scorer that the Grizzlies so desperately need him to be every night?

Involved in All Aspects

Shooting is certainly not the only way to see player involvement in scheme and game plan. When Lee is on his shooting game, his assist and rebounding numbers also tend to be on the up and up. Lee has the athleticism and basketball wherewithal to be able to impact multiple facets of a game, and when Courtney is engaged in the contest it shines in his activity.

Assists are one of the ways to measure whether Lee is playing well or not. During his best month statistically, February, he averaged almost 3 assists per game, easily his highest tally all season long. Making plays for teammates is a huge way to show activity within the offense. Here is an example from his 19 point game recently against the Nuggets involving Ed Davis. 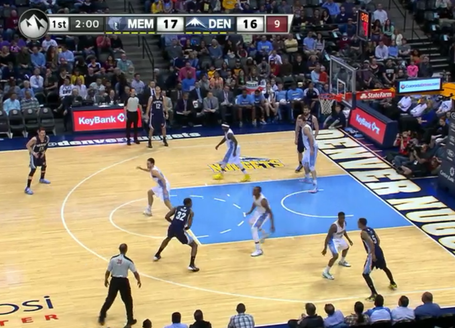 Ed Davis starts with the ball as he and Lee get in to the ol' 2 man game of the pick and roll. Courtney will come to Ed and get the pass, using the Bossman to create space for himself. 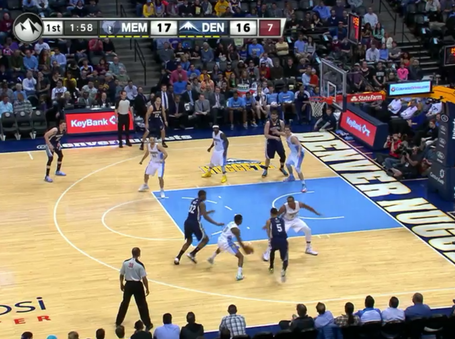 Darrell Arthur, formerly of the Memphis Grizzlies, overplays on Lee's cut to the basket. Look at all that blue paint for Ed Davis to play with. Lee responds in kind, throwing a nice pocket pass to lead Ed into the lane. 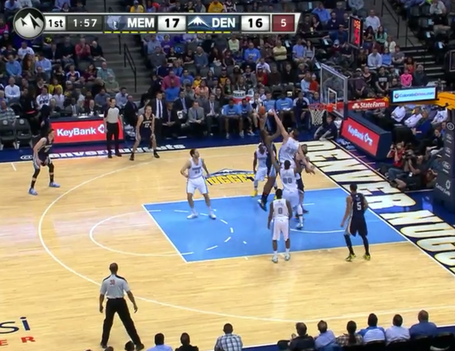 Ed gets that pass and take it to the rim, going straight up and scoring on an and-one opportunity over Timofey Mozgov. Courtney Lee, in a game where he played quite well himself offensively, creates for others as well as part of the overall team scheme.

Another great example of this is rebounding. In the months of February and March combined Courtney Lee averaged about 3.2 rebounds a game. Getting that kind of production from a guard is quite the asset; unless they are a Lance Stephenson, who is averaging an obscene 7.3 rebounds per game, most guards fall between 1 and 4.

When Lee grabs 5 or more rebounds, the Grizzlies are 7-2.

A lot of rebounding is positioning and energy; who wants it more, so to speak. When Courtney is in to the game, his rebounding numbers tend to be up. The recent Nuggets game is a great example of this, as he snagged 7 rebounds in addition to his 19 points. Lee as a rebounder has winning impact, as well. Since Courtney Lee has become a member of the Grizzlies, he has gotten 5 or more rebounds 9 times, and Memphis is 7-2 in those games.

As Memphis' starting SG moving forward Courtney Lee will have to continue to be engaged in all aspects of the game so that his shooting can be a by product of his success, not the only measure of it.

It sounds simple, really; play a starter good minutes, run plays for him to get and take shots and watch him succeed. In the case of Courtney Lee, however, it is sometimes not that simple. Lee saw his minutes go down in March as Tony Allen rounded back in to form. While TA is certainly important as a defensive stopper and has improved his offensive game Lee cannot make as much of an impact as a scorer, facilitator or rebounder from the bench. He also is the 4th scoring option in the starting lineup, meaning that his shots with that group of players will be few and far between at times.

How do the Grizzlies stay a perennial playoff contender in the coming years with a roster featuring a few aging veterans? Perhaps they should look outside the United States, and search for the next Grizzlies abroad.

Lineup tweaks can be a solution to this problem. As substitutions begin to go through the rotation of a game, allow for Lee to go up the "scoring priority" totem poll. A Calathes/Lee/Miller/Davis/Koufos line-up would make Lee the top scorer, while pairing him with a Z-Bo or Gasol would create great post-to-perimeter scoring options. Allow Lee to shine, and he could very well rise to the challenge.

Another issue is at times he is too much like Marc Gasol and Tayshaun Prince and not enough like Mike Conley or Zach Randolph in that when he gets those shots, he doesn't always take them. Lee took almost 4 less shots in March on average than he did in February. Those are 4 shots that are likely going to a Tayshaun Prince, or a Tony Allen, or another player who does not (outside of Mike Miller) bring the spacing ability offensively that Courtney does, When Lee has a shot, he needs to take it to keep defenses honest.

He also needs to be put in to positions to be successful by Head Coach Dave Joerger. Coach recently stated in a post game presser that he had to do a better job of getting Courtney looks both inside and outside the paint, and this shined through in the Denver game. Take this set for example. 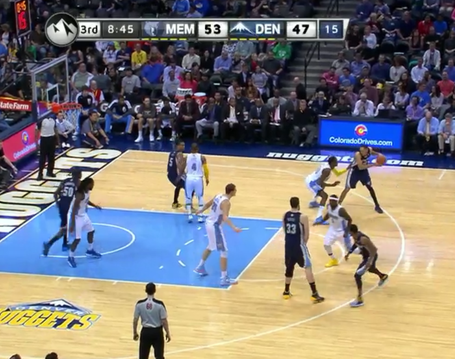 Out of a horns set that the Grizzlies love so much, Tayshaun Prince starts with the ball at the elbow, with Courtney Lee in the post and Zach Randolph coming up through the paint. Marc is setting an off-ball screen for Mike Conley on the opposite elbow. 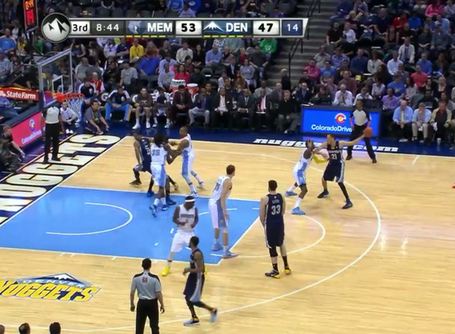 Z-Bo comes across the paint not just to set up in the post, as he usually does. He sets a screen on Randy Foye, allowing for Courtney Lee to cut to the paint. 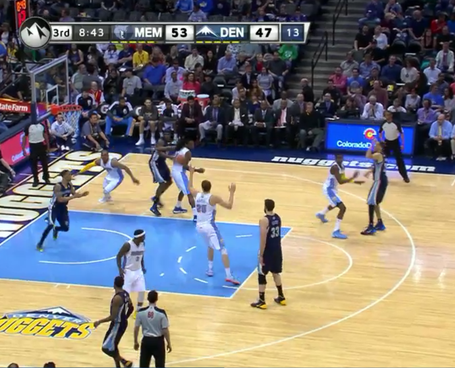 Tayshaun uses his length to get separation for a pass in to the lane for Lee, who is wide open thanks to Foye losing his man and Randolph's use of his body to separate Foye and Lee. This leads to an easy lay-up for C-Lee.

Check out the article thread from April Fool's day. Pau comes back to Memphis, Lionel is rehired to run press conferences, Beno Udrih befriends a lion and lots lots more.

Lee's offense does not need to solely be off of the 3 point shot. Getting him the ball in a variety of ways is important to keeping teams on their heals in regards to game planning for C-Lee. If he were solely a perimeter threat, teams could look off of him when he was inside the arc. Lee's athleticism allows for him to get the ball in different sets and put the opposition in a tough spot. Lee will never see a double team, but unlike Tayshaun Prince he has the skill to hurt his opponent in those 1-on-1 match-ups consistently.

The reason Courtney Lee is now a Memphis Grizzly is because he is viewed as the 4th scorer this team has always needed, a player who can hold his own defensively but provide crucial spacing as a 2nd perimeter threat offensively. Come playoff basketball, which for all intensive purposes Memphis is in now, this will be vital to any success Memphis has on this run.

Now is not the time or place for streaky play. Getting Courtney Lee involved in the offense in a variety of ways and attacking in every aspect of the game will mean a consistently dangerous Courtney Lee, which will also mean a much more dangerous Memphis Grizzlies team as the games become more and more meaningful down the stretch.