The Memphis Grizzlies wrap up their 5 game road trip tonight in Minnesota against the Timberwolves. The Beale Street Bears hope to improve to 3-2 on this NCAA Tournament-inspired swing away from the FedEx Forum, but it will not be easy against a Minnesota team that will likely be motivated to deliver a better performance than the last time they saw this Grizzlies team.

For the Minnesota perspective, check out Canis Hoopus

Revenge is a dish best completely avoided if at all possible.

A deep seeded desire to get back at someone else who did you wrong in the past is a strong motivator, but for the party looking to get revenge, it can be all consuming. It also can be crushing if vengeance is not achieved; the only thing worse than finding the empty release of revenge successfully gained is the darkness of failure at that dastardly goal.

Of course, being the target of revenge is dangerous in and of itself and is the unenviable position the Memphis Grizzlies find themselves in on this night. Just 9 days ago Memphis embarrassed Minnesota in the Grindhouse 109-92, leading wire to wire and taking advantage of a Timberwolves team that likely had their playoff hopes crushed by the Phoenix Suns the night before. The Grizzlies dominated that game, and Minnesota likely has not forgotten. They will be focused, they will be ready and they will have vengeance on their mind

It is up to Memphis to answer the bell as the team that is fighting for their playoff lives. How do they do that? Three keys...

Courtney Lee's offensive game certainly needs to be more consistent, but so does other aspects of his game, especially on the defensive end of the court. In the Grizzlies' last contest against Minnesota, C-Lee had issues defending Kevin Martin and his nifty pump fakes while being the one Grizzly player that struggled to get his offense going on an otherwise red-hot offensive night for Memphis.

Courtney Lee must build on his great Denver game tonight so that his latest streak is a positive and permanent one.

Of course, this cannot be the case going forward if the Grizzlies hope to make the playoffs and go on a run. Courtney Lee seemed much more in to the game against Denver, as his 19 points and 7 rebounds were a key part of the Grizzlies' win. Lee will have to be explosive, engaged and active from the beginning for Minnesota to lose some of that energy they will undoubtedly have at the beginning of the game.

The Timberwolves have sorely missed the efforts of Nikola Pekovic, who may miss the remainder of the season with ankle issues and had had injury problems throughout the year. A silver lining in that dark cloud, however, is the surprising performance of Gorgui Dieng. His per-36 minutes stats are through the roof;

12 points, 13.7 rebounds and 2 blocks? Scary. The rebound numbers aren't that big of a stretch either; he had 11 points and 17 (!!!!) rebounds against the Grizzlies last Monday. His shot chart isn't half bad for a player as raw as him either- 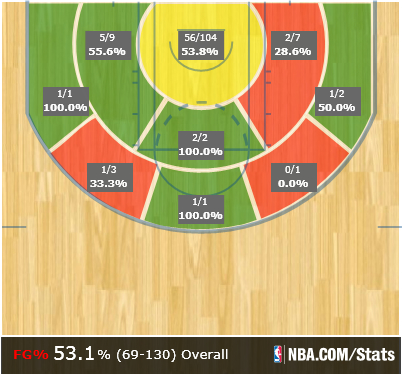 Not surprisingly, a vast majority of his shots are within the paint. Dieng at this point is a player who lives and dies in the lane; he needs to be close to the rim both offensively and defensively to be most effective. The best way to limit this is to force him out of that comfort zone, utilizing horns sets and other offensive plays that will lure him out of the lane while being strong against him defensively, not allowing him to be in position to grab the seven offensive rebounds that he gathered the last time these two teams met.

Dieng has great talent and promise. It needs to be squashed early tonight. Memphis has the superior front court; make that clear and do not give every player other than Kevin Love hope that they can play with the Grizzlies.

Minnesota looks to pace and assists to efficiently run Coach Rick Adelman's offense. In wins this season Minnesota assists on 26 of their 40 made baskets, and their 100 possessions per 48 minutes is good for 4th in the Association. Minnesota wants to run and get quick efficient shots off of good passes.

The best way to defeat that? Timing and physicality. Memphis must time up and rotate in to passing lanes to throw off their assist-to-made-basket ratio. In Timberwolves losses they only average 21.2 assists per game. Even a tipped pass or hand in the face can throw off the timing of Ricky Rubio, J.J. Barea and the Motion Offense while making life more difficult for perimeter players like the Kevins Martin and Love.

In order for Memphis to avoid Minnesota's revenge they will have to disrupt timing and limit Gorgui Dieng's effectiveness.

Tonight would be a good night for the Chaos Crew of James Johnson and Tony Allen to make an appearance together. Their energy and intensity is exactly what could make Minnesota crazy.

While the Timberwolves will have a better showing than they did in the last game, Memphis will play like the team with more to play for that they are. Marc Gasol will take advantage of young Dieng and the Grizzlies will end their road trip with a big win.