NBA Playoffs 2014: A tale of two offenses: What happened to the Grizzlies in Game 1 in OKC?

The Grizzlies offense was an enigma in Game 1 against the Oklahoma City Thunder. How and why were they so bad at times, yet so good at others all in one game?

Share All sharing options for: NBA Playoffs 2014: A tale of two offenses: What happened to the Grizzlies in Game 1 in OKC?

It was the best of times, it was the worst of times for the Memphis Grizzlies in Game 1 of the first round of the 2014 NBA Playoffs against the Oklahoma City Thunder. The worst of those times revolved around the Grizzlies offense.

The offense was an abomination for most of the night. There's no doubt about that. However, for a certain stint of time, the offense was clicking on all cylinders. During this time, the Grizzlies were able to put a significant dent in Oklahoma City's massive lead. Alas, it was too late.

After the final horn sounded, many Grizzlies fans were left to ponder just how and why the Grizzlies were so bad on offense for such a long stretch, yet so good for a period of time as well?

Here's a quarter by quarter breakdown of the good and bad Grizzlies offense.

The game opened with the offense completely discombobulated. There was a complete lack of movement, and forced shots galore ensued. Memphis tried to pound the ball down low early, which is where they usually have an advantage. However, against a team with great length in the post like the Thunder, that advantage was mitigated. The Thunder blocked five shots in the first quarter, all of them coming down low. The Grizzlies made it easy for the Thunder though by becoming stationary in the post. If the Grizzlies were setting back screens or using flash cuts to the elbow to create advantageous hi-lo situations, it would have been a different story.

Get ready for the playoffs

Oklahoma City has one of the best defenses in the NBA, and one that possesses an abundance of athleticism. The Thunder utilized this athleticism to cut off the head of the Grizzlies main point of attack, the pick & roll. Mike Conley was rarely allowed to turn the corner coming off of a screen, thus the floor was not opening up for the Grizzlies. Penetration is key to head coach Dave Joerger's offense. When the Grizzlies don't get it, bad isolations follow as they did in the first quarter.

When the Grizzlies were able to get a good look at the basket in the first quarter, they couldn't hit the shot. Memphis shot just 5/29 from the field in the quarter, and when they couldn't make Oklahoma City pay for leaving jump shooters open, they just dug in a little deeper towards the paint, bogging down the Grizzlies offense even more.

Below are several excellent examples of the Grizzlies consistent lack of movement in the quarter coupled with forced shots.

Much of the same occurred in the second quarter. The Grizzlies continued to struggle to penetrate the lane, and when they got anywhere near the rim they looked timid because of all the blocks the Thunder racked up in the previous quarter.

Notice how on point Oklahoma City's defensive rotations are in these clips below. As previously mentioned, the Thunder are an excellent defensive squad, but the Grizzlies made their job easy by dribbling themselves into double teams and a general lack of movement once again.

At halftime, Joerger made some adjustments. These changes were clear basically from the get go in the second half. Unlike the offensive sequences for the Grizzlies in the first half (dribble, dribble, dribble, pass down low, block), crisp sets were actually run in the third quarter, most of them out of Horns, a popular set among NBA offenses that always initially looks like the picture below. (If you want to learn more about Horns, this stellar video breakdown is an excellent learning tool.) 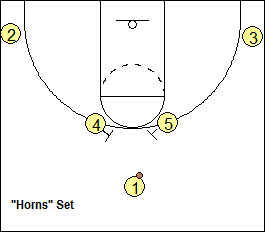 One of the first plays the Grizzlies ran that worked so well to start the third quarter was out of the Horns set. The play begins with Mike Conley at the top of the key, Zach Randolph and Marc Gasol at both elbows, and Courtney Lee and Tony Allen in opposite corners. To begin the set, Conley passes the ball into Randolph at the elbow before sliding to the weakside behind Gasol.

Randolph then passes the ball to Gasol at the opposite elbow to set up the next potential action.

Right when Gasol receives the ball, Courtney Lee comes across the baseline and sets a back screen on Allen's man to try to free him on a cut into the lane. If it worked, Gasol would hit him with a bullet pass for an easy layup. However, Kevin Durant does a good job snuffing out the back screen and eliminating that option.

When the cut across the lane by Allen doesn't work, the next progression is for Randolph to saunter down to the low block and screen for the screener, Courtney Lee. Randolph sets a great down screen for Lee to pop out and receive the ball. Gasol delivers the pass.

As the ball gets to Lee, Randolph takes advantage of the position the team's movement has created for him on the low block, sealing his man to receive the entry pass.

After throwing the ball down low to Randolph, Lee cuts across to the other side of the perimeter, taking his defender with him in the process. This is important because now no Thunder player is there to help down and double on Randolph, creating the one-on-one matchup the Grizzlies had struggled to find at all before this point. Notice how much space Randolph has to go to work.

Having already caught the ball in a deep position, it only takes Randolph a couple dribbles before he finds himself directly under the basket. He goes up for what is going to be an easy bucket, and Serge Ibaka is forced to foul him.

Watch the full play that was just diagrammed below. If the Grizzlies would have utilized the Horns set all night and used more creative movement off the ball consistently, it might have been a very different game.

In a baffling turn of events, the Grizzlies completely went away from everything that worked so well on offense in the third quarter. There was nary a play run out of the Horns set, and both ball and player movement dropped off substantially again.

It doesn't help that the Grizzlies reverted back to missing nearly every open look they did get. What a brutal shooting performance. Memphis hit just 19 shots from the field in the first, second, and fourth quarters. They hit 14 shots alone in the third quarter, yet they went away from everything they did in that quarter the second it ended. How bizarre.

The Grizzlies are a mediocre offense, but it's hard to believe they will have another horrible shooting performance like Game 1. Also, count on the Grizzlies to watch the film and come out and play more in their own skin offensively so to speak. There will be more curls, down screens, cuts, ball rotations, etc. Or at least there better be if the Grizzlies are to have a prayer in this series.