Well, that started poorly. The Memphis Grizzlies, despite a valiant effort to fight back in the game, were outclassed by the Oklahoma City Thunder Saturday night. Fortunately for all who #BelieveMemphis, it is the first to four wins, not to one. How can the Grizzlies steal one in OKC and get back to Memphis with a little momentum?

Grizzlies vs. Thunder Grades- Game One

How Do the Grizzlies Fill the Void Left by Nick Calathes?

Finding a Chink in OKC's Armor

For the Oklahoma City Perspective, Visit Welcome to Loud City

You can only go up from here, right?

Saturday night, while fun (especially at the GBB/3SOB watch party), was certainly not ideal if you are a fan of the Bears of Beale Street. A terrible start, an amazing hopeful comeback to down two points only to fade due to running out of gas late. Make no mistake, Oklahoma City deserved the win, and now they have a 1-0 series lead.

Thankfully for all those who believe in the Gospel of the Grit and the Grind, these series are longer than just one game. Memphis has another chance tonight to take a game in OKC and steal away home court advantage. It most certainly will take a better effort than the one given to start the game Saturday, and it will require that Memphis adjust to a Thunder team that is deep, running in transition well (32 fast break points for OKC Saturday night) and focused and peaking at the right time.

The Thunder bigs had a solid defensive game; Nick Collison and Steven Adams combined for five blocks and were instrumental in making Z-Bo miserable for much of the evening. Serge Ibaka, however, was the X-Factor for the Thunder Saturday night, having a tremendously efficient game. 17 points, 9 rebounds, 4 blocks and an assist on 6-8 shooting and 5-5 from the free throw line. Here is Serge's shot chart. 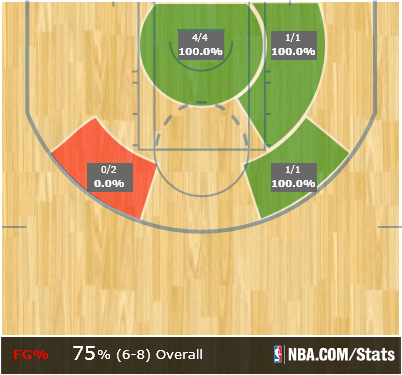 Of course, Kevin Durant was tremendous (33 points, 8 rebounds, 7 assists) and Russell Westbrook had a double double (23 points, 10 rebounds) but Ibaka's huge game really tipped the scales in favor of the Thunder. Durant and Westbrook will continue to play well, and the Grizzlies can withstand that as long as Ibaka's ability to drastically affect the game is limited. Pump fakes and off ball screens on offense will make Ibaka's defensive presence less definitive, while on defense Memphis bigs cannot lose sight of Ibaka in the paint. Force him to earn everything outside of the lane, and do not send him to the line.

The Memphis Grizzlies' offense is not good enough to miss out on any scoring chances. Coach Joerger's charges shot 18-31 from the free throw line Saturday night, while the Thunder shot 28-32. That is ten points that the Grizzlies' lost. Memphis for the season shot 74% on the season from the free throw line, which would have been about 23 made free throws instead of the 18. Would that have won the game, or gotten it closer? Perhaps, but because of poor shooting the Grizzlies will never know.

It isn't like it came from Ed Davis and Kosta Koufos either. The "Three Grizzly Kings" of Zach Randolph, Marc Gasol and Mike Conley were 13-22 from the charity stripe themselves, with Zach and Marc shooting 9-17. Seeing as how they are the most likely players to continue to see free throw attempts, hopefully they got up some extra practice shots from the line Sunday at practice. If the Grizzlies are to win this game tonight, the free throw percentage must be at or above season averages.

Get the Guards Off the Glass

While the Thunder wings and guards are doing a great job in transition getting out on the break, they're doing just as well on the boards. The Thunder out-rebounded the Grizzlies 51-41 in Game 1, and while Ibaka and Durant certainly contributed it was the OKC guards who were especially effective on the boards. Russell Westbrook (10) and Reggie Jackson (8) grabbed more rebounds than Marc Gasol (6) who played a game high 45 minutes and is 7'1". Caron Butler also grabbed 5 rebounds in a game that showed a generally better effort by the OKC perimeter players all around.

So, how does Memphis suppress the Thunder guards? Spacing is partly to blame here; so often in Game 1 the Grizzlies' guards got caught up in and around the paint when they weren't shooting, putting them out of position to properly defend transition baskets and also allowing for the Thunder wings to crash the glass. Poor three point shooting is also to blame; the Grizzlies were 2-11 from beyond-the-arc (Mike Conley in particular was bad, 0-6), and those misses result in long rebounds for OKC wings and chances to push the pace. While rebounding does depend on context at times, the fact that Memphis, a team that prides itself on the quality of its front court, got out-rebounded so decisively is a concern moving forward.

The Grizzlies must control the glass and keep the Thunder guards off of their desired pace.

Some times it is as simple as spacing and making shots. Hopefully Mike Conley's shot returns and the Grizzlies' are able to contain the athleticism of the Thunder more consistently through controlling the boards and therefore the pace.

Memphis can still win this series and lose this game. The Grizzlies came home down 0-2 to the Clippers last season only to go on a 4 game run. However, this Thunder team creates more issues for the Grizzlies than that LAC team did and life would be much simpler with a split. In order for the Grizzlies to get out of OKC 1-1, they must control the boards and tempo of the game, limit Ibaka's effectiveness and take advantage of their own free throw opportunities.

The Grizzlies will keep this game much closer by doing these things and Mike & Mike (Conley and Miller) will close it out when they are needed most.