NBA Playoffs 2014: 111 Thoughts on a Wild Game 2 between the Grizzlies and Thunder

What follows are random, tattered thoughts - one for each Grizzlies' point - loosely based upon the mayhem of last night. Slovenia, the difference between Oklahoma City and Memphis, and WOOOOO feature prominently.

Share All sharing options for: NBA Playoffs 2014: 111 Thoughts on a Wild Game 2 between the Grizzlies and Thunder

1). Did that actually happen?

2). I check the internet to see if that actually happened.

The Grizzlies stole a game from the Thunder in Oklahoma City! Weeeee! The game was sealed on a beautiful play late in the game after a timeout. Just how did what turned out to be the game-winning play come to be?

32). What a game. You'd need scientific notation to account for all the huge plays, subtle changes, gut checks and fan reactions that played a part in this one.

33). For stretches, I watched this game from the fetal position.

34). My dog, ever the loyal watcher, was concerned that my heart lay in a puddle beside me, and whimpered intermittently.

36). With less than a minute left in OT, in a span of fourteen seconds, Durant sprinted downcourt, bowled over Conley who had slid over to take a charge. The shot caromed off the rim, caromed off of five different players' hands before "caroming" off of Gasol's leg and back into the hands of the player Durant bowled over just seconds ago, Mike Conley.

37). Given his years in the Barcelona youth soccer academy, the ball did not "carom" off of Gasol's leg unintentionally.

39). Tony Allen cutting and dishing to Randolph for the game winner.

40). Randolph was so concerned about Serge Ibaka blocking his shot that, after catching the ball just outside the paint he called a timeout rather than attempting a shot.

41). Randolph girded his loins, and scored the game winning basket....with Serge Ibaka swooping in like a condor from behind.

44). Derek Fisher appearing as if he plays basketball while sucking in his belly.

45). Scotty Brooks seemingly unaware he has two of the best ten players in the NBA, and that running Pick and Roll with them would be indefensible.

46). If Memphis wins Game 3, no matter how or why or where from, Scotty Brooks or Russell Westbrook will be blamed.

A Section Devoted to the Awesomeness that Is Kevin Durant

48). When the Raiders opened the Arc, they saw a gif of the Durant 4 point play.

49). The 4 pt play in the corner, in terms of degree of difficulty, was an all-timer.

50). Next time bend it around the rings of Saturn. You know, to make it fair for the rest of us.

51). If the refs decide, for one game, to change the way they officiate Tony Allen guarding Kevin Durant, Memphis will lose.

A Section Devoted to the Awesomeness that Is Beno Udrih

52). The dissonance between this section and the last is intentional, jarring, and apt.

Grades for each Grizzly in their win over OKC.

53). Beno Udrih was signed as insurance. Insurance is one of the few things people pay money for and hope to never have to use.

54). Pressed into service by necessity and something called Tamoxifen, Beno Udrih exceeded our wildest expectations.

57). Beno Udrih did not have a job less than two months ago.

58). He is now the author of the most unexpected playoff performance in Grizzlies history.

59). There will Beno Thunder in his presence.

60). How could you Beno so heartless?

62). Hours after the game ended, sleep slow to find me, I found myself on Slovenia's Wikipedia page. No mention of Beno Udrih.

64). The OKC crowd, in terms of noise and devotion, is one of the best.

65). Yet the greatest argument against the existence of free will is the OKC crowd, the machinations of their coordinated cheers, and their choice of wardrobe.

67). Lost to the national media is how the clash of cultures between these two fan bases informs this series.

68). Oklahoma City's arena feels like a college atmosphere. From a Grizzlies fan, that is both a compliment, and an enigma guised as a compliment.

69). Memphis does not understand conformity. It's niche.

71). Memphis suspects all of disrespect, conspiracy, and ill will.

73). Identity should be celebrated.

74). A city with a chip on its shoulder is great and also sometimes not. I'm sure the identity of Oklahoma City - whatever that is exactly - is great as well.

75). We can joke about the differences as a matter of perspective.

76). OKC fans have never experienced a basketball game without Kevin Durant, nor will they for several years.

77). Perhaps Grizzlies fans feel that OKC hasn't paid their hoop penance, that all of the years of losing in Memphis make victories like last night all the sweeter.

79). Joerger cross matched Conley on Thabo Sefolosha early, essentially allowing Conley to rest on defense rather than guarding the amalgam of human and Ferrari that is Russell Westbrook.

80). Tayshaun Prince played just 14 minutes of an overtime win. If a starter plays just 26% of a basketball game then they are not a starter.

81). How Joerger dealt with OKC's small lineup was a key factor to this series. But Joerger flipped the script, leveraging what could have been a weakness into an unexpected strength.

82). Scotty Brooks is left to ponder how he will deal with Mike Miller's shooting at power forward.

83). I wonder at the sustained success of any small ball lineup that does not involve Marc Gasol. For a game, at least, it worked.

84). The only reason Kendrick Perkins was on the floor was to grab a rebound after a Free Throw miss.

85). Conley made his free throw, and Perkins inbounded the ball. With 12 seconds left needing two points to tie Perkins loped down the court towards the rim.

86). This should have been the end of Kendrick Perkins' involvement in this professional basketball game.

88). Perkins' game tying putback looked like a cross between a volleyball set and slinging a bag of garbage into a dumpster.

89). The below graphic details both where Perkins is allowed to shoot, and the likelihood a leather ball will pass through a metal hoop. 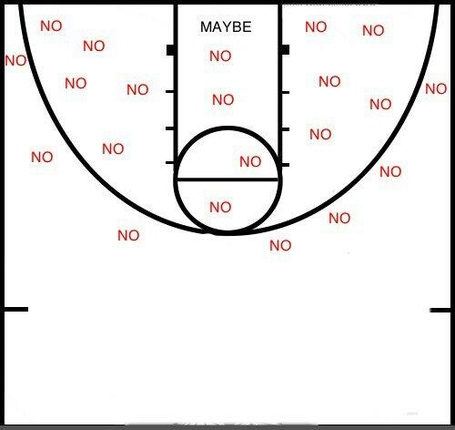 108). When people say "the movie is good, but you should read the book," they were hinting that a richer experience awaits those that will invest the time.

109). The NBA playoffs are the books of basketball.

110). Some people think the NCAA tournament is the most fun version of basketball, I say, read the books.