And there was no one surprised.

Winner of the 2013-14 Joe Dumars Award for sportsmanship

At least no Grizzlies' fans were surprised. We've long known that Mike is one of the nicest, most down-to-earth fellas around the NBA. I don't think I've ever heard a single ill word spoken about Conley other than the fact that he beats everyone in every competitive challenge he's presented.

You never see Mike talking ish on the court, and I can count on one hand the number of times he's displayed animated emotion on the basketball court. Number 11 just takes care of business and gives a reverent and somewhat coy 3-finger salute when he nails a three, the most lavish behavior displayed by Mike Conley during an NBA game.

The runner-ups behind Conley were Boston's Jeff Green, Phoenix's Channing Frye, Washington's Bradley Beal, Portland's Damian Lillard and Chicago's Mike Dunleavy. All solid choices, but Conley came out with 77 of the 334 votes (23%) and takes home what I assume to be a trophy or possibly a certificate adorned with smiley face stickers.

The Joe Dumars Award comes with a $10,000 donation to Mike Conley's charity, the St. Jude Children's Research Hospital. Mike has long been and advocate and supporter for those suffering from sickle cell anemia. 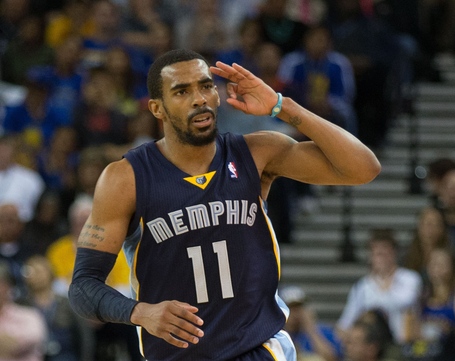