98 thoughts - one for each point - on another wild playoff game. Mike Conley's hat, the Thunder checking out, and PTSD flashbacks.

1). I sing the series electric. The armies of Grizzlies love engirth me and I engirth them.

3). For much of the game Memphis controlled the pace, the style.

4). For much of the game, everything worked.

34). Russell Westbrook and Kevin Durant played most of the game like jealous husbands, each afraid to leave their wife alone with the Ibakas and Sefoloshas of the world.

38). Serge Ibaka is a wonderful player being treated as if he is Deandre Jordan.

39). Kendrick Perkins is not a wonderful player who is being treated as if he is Serge Ibaka.

40). For much of the third quarter, Memphis ran straight to the rim. Durant and Westbrook ran dutifully up-court, where they did what they were put on earth to do: create baskets out of nothing. After which they ran back down court, emotionless, and history repeated itself.

41). For a while, it looked like the Thunder didn't believe in what they were doing.

42). Belief is impossible to quantify.

43). Still, that third quarter felt as if the Thunder's twin forces of nature went through the motions. As if they were confused that Memphis would not submit to their will. As if they didn't quite believe that their own powers were enough. That changed eventually.

44). Thankfully, this happened juuusssssttttt enough for Memphis to eke out a victory.

Random Stuff that May or May Not Bear Significance

45). The hat Mike Conley wore to the post game interview, in a prior life, was a piano.

46). Even monkeys, banging on a typewriter to infinity, will eventually create "Hamlet." But Scotty Brooks doesn't have until infinity. He has just a few more games. Sooooo...... we'll see!

47). Gravity is a proven force. What goes up must come down. Mike Conley's one handed attempted layup at the end of regulation, which went up, came down, then went back up again, is apparently the exception to gravity.

49). How huge was his overtime? Nearly won the game in regulation, only to be spited by the gods or gravity. Then hits a three, generates a steal, and puts in the transition layup.

50). If you're judging point guards on their ability to play both ends of the court, throwing out any player who is a liability, the best point guards in the NBA would be as follows: Chris Paul, Russell Westbrook, and then Mike Conley, Kyle Lowry or Goran Dragic (depending upon how you feel about Dragic's defense and the player's role in their team's success).

51). I have always felt that the tipping point of Conley's career, the moment where he really felt he belonged on an NBA court, was his last second 3 pointer in the triple OT game against OKC in 2011.

52). Or maybe that was my moment - when I stopped thinking of Conley as if he were a caretaker, stopped bestowing the back-handed "game manager" compliment, and felt he could be more. Much more.

54). A time during which, as I watched this game, my brain flashed back PTSD style to Game 1 of the Clippers series. I was in both places, watching both games. The horror.

55). In LOST, there was this special, low guitar chord, cutting the silence again and again.  That was how you knew shit was about to go down.

56). I heard that chord pretty much the entire fourth quarter.

58). If you feel as if the tenor of this piece has shifted from before, then you scored favorably on the reading comprehension portion of the SAT.

59). Tony Allen is a net positive. I preface everything with that.

60). Tony Allen is the chaos, the pit in a Grizzlies fan's stomach when they peer over the ledge of a tall building, and realize there is little restraining them from leaping over the edge into nothing.

61). What is unique about Tony Allen is that he makes Thunder fans feel the exact same way.

62). He is the child you scold, knowing that the words are wind, that they will repeat their mistakes, that you will love them nonetheless.

63). For most of the game, Tony Allen established squatter's rights inside Kevin Durant's skin.

64). Tony Allen can tell you what Durant will do before he does it.

65). Tony Allen cannot tell you what Tony Allen will do before he does it.

66). Afterwards he'll explain what happened with malapropisms and Tony-isms and generally throw the delicate balance between language and meaning askew.

66). Tony Allen treats the English language like a basketball game.

67). But back to his defense, to his ability to suck the marrow from a scorer's bones. Kevin Durant did not make a three pointer. He made exactly one shot outside the paint. Let every discussion of Tony Allen begin there. 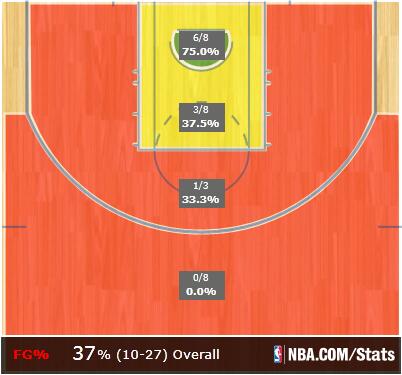 68). With 45 seconds left in the 4th quarter, game tied, Tony Allen receives a baseline pass, drives to the rim and dunks.

69). With 40 seconds left Allen, adhered to Durant coming up from the baseline, switches onto Russell Westbrook as Courtney Lee takes Durant. Allen crouches into a defensive stance for the smallest sliver of time before springing into what should have been a very comfortable passing lane.

74). For the second time, I am watching two games at once, toggling back and forth. Except this time I'm only toggling back 72 hours.

76). The tipping point, the straw that breaks the camel's back, the irreparable breach between Russell Westbrook and Kevin Durant will be that everyone thought Durant's 4 point play was waaaaaaaayyyyy cooler than Westbrook's.

77). And it was. There's no denying. Durant's was more terrifying too.

78). Petulant, arrogant, brooding. Despite all of that, Russell Westbrook is still one of the most dynamic basketball players in existence. And that 4 point play is just our latest reminder.

79). I watched the play a dozen times. Westbrook's leg flares out unnaturally, searching for contact.

80). I'm 90% sure Allen fouled him, but I'm 100% sure that a lesser defender would have never gotten around the pick and been able to disrupt the shot.

82). How will OKC respond to losing two straight games to a team they definitely think they're better than?

83). How many Divers will Silky's sell Saturday afternoon? An ocean's worth?