Return of the Q-Pon? Pondexter Looking to Play if Memphis Advances

In a crowded wing rotation as it is, throwing another hat in to the ring may only complicate thing more. Quincy Pondexter apparently doesn't mind, as is reported in a MemphiSport article recently. What would a possible Q-Pon return mean for Memphis? Is it necessarily a good meaning?

Share All sharing options for: Return of the Q-Pon? Pondexter Looking to Play if Memphis Advances

All that down time with his dog Buckets must have done Quincy Pondexter some good.

A story from MemphiSport's Andre Johnson reports that Q-Pon, as he is affectionately called, would be interested in returning to the active roster if the Grizzlies' advance far enough for him to be cleared to play by doctors. Here are some highlights from the article, which you can find in its entirety here.

Although Pondexter has yet to be cleared by doctors to resume practicing, the former University of Washington star hinted the possibility exists that he could return during Memphis’ playoff stretch...

...Although he has not been cleared to return to action, Pondexter said he’s recouping comfortably and would welcome the opportunity to give it a go if the Grizzlies manage to upset the Thunder.

"It’s feels great," said Pondexter, when asked about the status of his foot. "I’ve been conditioning a few weeks now. You know, I see a lot of progress. But I’m fine. That’ll be awesome (if cleared to play) because I really want to get out there and play. I’m excited. I’m glad (the Grizzlies) are doing well."...

There is no denying that Q-Pon had some success for these Grizzlies in the postseason last year. As the article mentions, in last season's playoffs Pondexter played about 24 minutes per game and averaged almost 9 points a game, both career-high's. His shot chart from that playoff performance is also pretty nice, considering Memphis could certainly use as many effective 3-point shooters as they can get. 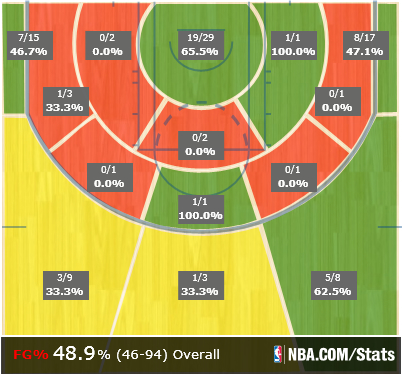 In the GBB email thread about this topic, our own Keith Edwards mentioned the possibility of a Mike Miller/Quincy Pondexter lineup being "incredibly enticing."

Would Memphis get that version of Quincy Pondexter at this late stage of the season though? A fair question to ask, since that version of Q hasn't been seen since, well, last postseason. Quincy played in 15 games early in the season, averaging 18 minutes per game. His minutes were sporadic though, as Coach Joerger was finding his way through all the depth this Grizzlies roster had acquired over the off-season.

In two games in November, due to a somewhat cold start, Quincy received 2 Did Not Play- Coach's Decisions and was upset with his lack of time. He went off in a loss against the Brooklyn Nets as Memphis tried to adjust to life without Marc Gasol, scoring 22 points on 8 of 12 shooting. During this game, however, Q-Pon had moments of strong tension for Coach Joerger, at one point staring him down intensely. This led to Quincy being benched the following game against the Phoenix Suns.

Would Coach Joerger hold this against Quincy at this point? Doubtful; grudges don't appear to be high on Joerger's priority list. What would be held against Quincy is how he was playing before his injury. Here's Pondexter's shot chart through 15 games this season. 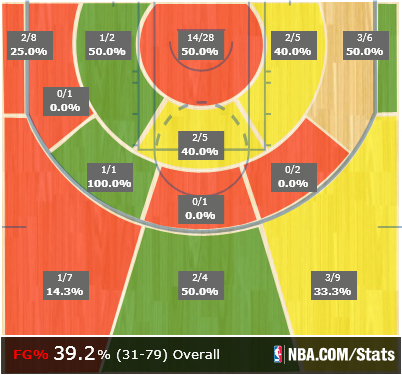 A far cry from the Q so many of us thought we'd see after his very good series against the Spurs in the Western Conference Finals. It wasn't just offensive struggles either; Q-Pon's defensive rating through those 15 games played was a putrid 114.1. His overall net rating was a -18.1, which was the team point contributions with him on the court. To put that into perspective, Tayshaun Prince, who many in Grizz Nation think is a terrible option to play as much as he does at this point, has a season long net rating of .7. According to the numbers, the Grizzlies this season are 17.5 points worse with Q-Pon on the court than with Tayshaun.

Granted the sample size is small and certainly no one would pick Tayshaun over Quincy long term, the point is this; it is not like Quincy was setting the world on fire before his injury. This also is not the first major injury Quincy has suffered in recent years. Remember the knee sprain that kept him out of multiple games during the 2012-2013 campaign. Also, if Q-Pon was to return and get playing time, the minutes would likely come at the expense of a Tony Allen, Courtney Lee or Mike Miller, seeing as how Coach Joerger has shown time and again that Tayshaun Prince, when healthy, will start and play considerable time every game.

Quincy Pondexter has value and is likely an important part of the roster in the future. Now just isn't the time for a return.

This version of the Grizzlies, while it would benefit from a 2013 playoff Quincy Pondexter, is not likely to see that player again until the start of the 2014-2015 season due to this foot injury that has taken much of Q's 2013-2014 campaign. Let Quincy get healthy and hit training camp in October at full force. The contract extension that Quincy signed at the start of this season is extremely favorable to the Grizzlies; the 4 year-$18 million deal puts Q's average salary at $3.5 million, right around Mike Dunleavy/Dorell Wright money for a role playing wing. This is decent value for a player that, when healthy, can be a pretty solid 3-and-d perimeter player.

Of course Quincy wants to play; he's a competitor and the NBA Playoffs are the highest level of competition the Association has to offer. Given health concerns, his early season struggles, the current makeup of the team,and how much time has passed, it just may not be the best thing for the Memphis Grizzlies to bring him back onto the active roster at this stage of the season.