NBA Playoffs 2014: Mike Conley must change his first half approach for the Grizzlies to win the OKC series.

Share All sharing options for: NBA Playoffs 2014: Mike Conley must change his first half approach for the Grizzlies to win the OKC series.

It was during halftime of game 4 when I glanced up at the jumbotron. Trying to find anything to be optimistic about after a less than spectacular first half, I stared at the scoreboard. Holding Durant to 3pts and Westbrook to 7pts should have felt good, but I couldn't seem to muster any positive feelings knowing that the Grizzlies were losing. Irritation began to manifest into frustration. It finally boiled over halfway through the "old guy climbing chairs" halftime show, when I leaned over and told my father "Okay, Zbo is playing awful, but there is no way we are going to win this game unless Mike Conley scores 15 points."  In my head it made sense. Marc had been picking up the slack for Randolph, who was struggling against Ibaka. I wasn't worried about Zach because I figured he would turn it around against Perkins in the 2nd half.

In this Pep Talk, "Coach Mullinax" harkens to one of the greatest tag teams of all time as motivation for Game 5.

For me, the biggest problem was Conley with 2 points. Watching Jackson cut through the lane and score at will had left me puzzled.  Mike Conley is better than Reggie Jackson. Why isn't he attacking the paint like him? The question faded from my mind as the Grizzlies fought back from a 12pt deficient; only to turn my previous statement into solid prediction, as Conley finished the night at 14pts, and the Grizzlies ended the night being tied in the series 2-2.

Now, it would be rather foolish of me to place the blame of that loss on Conley. Game 4 was the epitome of a "team loss". Missed free throws, crucial turn overs, bad shooting, and poor interior defense caused the Grizzlies to lose, and all those things can be (and should be) corrected by game 5. However, if the Grizzlies hope to get into the next round, one thing definitely needs to change...Mike Conley has to start games by making smarter decisions on where to shoot.

For the 2014 playoffs, Mike Conley is averaging 17pts/9 assists per game, and 6.5pts/3assists by halftime. While those are both decent numbers, in all 4 games, he has started the first quarter ice cold. This lack of points in the first can be contributed to him not being aggressive and a poor shot selection. In games 2 to 4, Conley's first shot was a 3pt attempt. In game 1, he took an awkward jump shot, and followed that with 2 3-pt shots. They were all misses.

Let's look at Conley's shot chart for the 2014 playoffs. 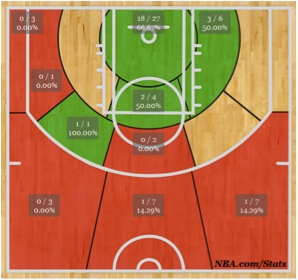 It is clear where Conley is having his best offensive success. He has made 65% of his shots inside the paint, while only being 20% from everywhere else including 10% from beyond the arc. We all can hope that Conley will be able to find his jump shot, but for the benefit of the team, he needs to drive more in the first half of the games. As seen in the shot chart, when Conley attacks the rim, he will usually make the shot. Make two or three of these and that forces the defense to collapse, allowing wide open 3's for Courtney Lee and Mike Miller. It also potentially draws fouls on Thunder players and allows free trips to the free throw line.

There is also the added benefit of making easy shots in the paint building confidence in attempting long range shots. Anyone that has listened to Pete Pranica and Brevin Knight during a game knows that shooters in slumps need to see the ball go into the hoop a few times to gain some confidence. Look at Conley's chart. That is a shooting slump. Without the benefit of a home crowd to pump him up, he is going to need whatever help he can get in order to get out of it.  Seeing a few floaters go through the net might be the cure.

The Grizzlies can often be a frustrating team to watch. It always seems to amaze me how long it takes before the Grizzlies to figure out that they need to stop settling for jump shots and penetrate. Anyone that has watched the Grizzlies for more than a few games knows that if they get in a jump shooting contest, they will lose 9 out 10 times.  While I know Mike Conley is one of the best shooters that the Grizzlies have, and he has made both game winning layups and clutch 3's, I fully believe that if the Grizzlies start off strong with great performances by Conley in the first quarters/halves of games, they won't need his clutch shots at the end of them.