It started bad and ended worse.

Quincy Pondexter had a terrible season by all standards. After a promising 2012-13 campaign with career-bests in most major statistical categories, Pondexter was poised to build on that this season. That is until everything went wrong.

The horror began when Pondexter came out of the gates playing like hot garbage, missing shots and defensive assignments galore. In the first five games of the season, he shot over 40% from the field just once. His average +/- during those five games was -10.6. He was uncharacteristically a liability on defense as well, not fitting in at all.

After that atrocious start, albeit in a small sample size, Pondexter began to see his playing time decrease. In the sixth game of the season against the Golden State Warriors, he played just 4 minutes. As if that wasn't painful enough, in the very next game against the Indiana Pacers, Pondexter played a meager seven minutes and broke his nose in the process. (That sucked, but the black mask he wore to cover his nose was pretty cool.)

From that point, the downward trend to the season continued for the then twenty-five year old NBA veteran. Rumors began to swirl that there was an ongoing rift between first-year head coach Dave Joerger and Pondexter over playing time among other things. Naturally, Pondexter was not pleased to see his spot in the rotation taken by a rookie (Jamaal Franklin) just because he had struggled for several games to begin the season. But, it was Joerger's prerogative to bench him obviously. His performance dictated the benching, as he was struggling to get any momentum going. It's still undetermined what Joerger's motives for benching Pondexter were, whether it was to light a fire under him or something else.

Not only did Pondexter's minutes get decreased. For three straight games early in the season, he received a DNP-CD. Needless to say, that did not sit well for a guy that averaged 21.1 minutes a game the previous season under then head coach Lionel Hollins.

The infighting came to a boiling point during the Grizzlies contest against the Brooklyn Nets early in the season, in what coincidentally turned out to be Pondexter's best game of the season. At one point during the game, a "staredown" occurred between Joerger and Pondexter that seemed to be initiated by Pondexter. The stare seemed to be his way of saying "see what happens when you play me." After the game, Joerger said he had handled the situation when asked by reporters.

The fighting didn't have much of a chance to escalate any further during game action, as Pondexter's season was brought to a swift, painful end just two games later against the Warriors. During the game, he went down with an ugly ankle injury. After the game, the injury was rumored to be a foot sprain. But upon further examination by doctors, it was deemed to be much worse than originally thought. Pondexter had suffered a tarsal navicular stress fracture in his right foot, effectively ending his troubled, short-lived season.

As for Pondexter's actual on-court performance unrelated to injuries or drama with Joerger, it's hard to judge given the fact that he played in just 15 games. Pondexter has never played a full 82-game season, and that is a concern going forward. Durability in this league is important, and injury-plagued role players typically don't stick around very long.

In the limited amount of games Pondexter did play in, he put up a career-worst field goal percentage (39.2%) and experienced over a 7% decrease in his 3P% from the previous season. Much of the drop off in Pondexter's shooting performance can be attributed to his bad shot selection, something Joerger has shown a lack of tolerance for. That at least partially explains why his minutes decreased when he was healthy.

Pondexter's 2013-14 shot chart mimics his season perfectly, reflecting a few ups and many terrible downs. In typical fashion, he was tremendous in a small sample size from the right corner three while being less than stellar from the opposite corner. He had several more areas where he was decent from, but there is no way to know if that would have lasted if he had played a full 82-game season. To be fair, Pondexter's woeful shooting from most spots on the floor likely wouldn't have lasted over the course of the season either had he stayed healthy. 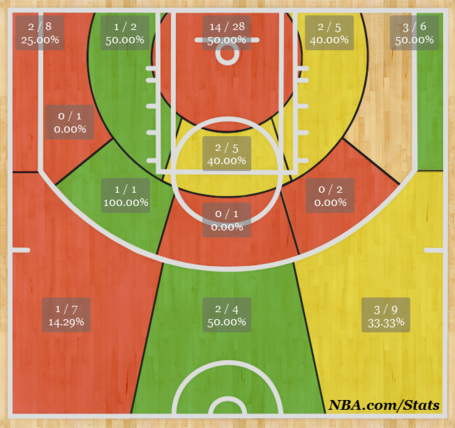 Despite the poor stats and the shot chart splattered with an ugly blood color, Pondexter's brief season wasn't a complete lost cause from an offensive standpoint. In the aforementioned game against the Nets, he tied his career-high in points at 22 on 66.7% from the field.

Defensively, Pondexter was mediocre at best. He's developed a reputation over the course of his still young NBA career as a decent, lockdown perimeter defender, but he didn't flash much of that ability this season. In fairness to him, the Grizzlies defense was playing its worst during the stretch he was actually healthy. That obviously can't all be attributed to him, and a lot of his awful +/- stats can be attributed to bad team defense more than anything he was doing individually. However, he deserves his fair share of blame for blowing assignments and poor help defense.

All in all, it's hard not to write this off as a lost season for Pondexter. Hopefully he will come back better and stronger for the Grizzlies, but nothing would be a surprise for a guy that is still finding his footing in the NBA. If he hasn't patched up that relationship with coach Joerger already, he might not even be in Memphis next season.