After moving around quite a bit since entering the league, playing for three different teams in his first three seasons, Jon Leuer finally seems to have settled in as a fine role player for the Grizzlies.

Leuer began the 2013-14 season in an unfamiliar spot, as a contributor on a playoff team. After posting decent numbers in Milwaukee in his first season in the league, many wondered whether those numbers were actually indicative of his skill set or a product of inflation from playing on a bad team. One thing that doubters failed to account for was Leuer's ability to fill numerous roles, which is valued on contending and cellar-dwelling teams alike.

If the first five games of the season were to be any indication, Leuer was to play a bit-part role again, hardly seeing any court time. But then, in a turn of events, Leuer got his big break when starting center Marc Gasol went down with an injury.

Always the consummate professional, Leuer stepped up to the plate and delivered, quickly becoming a fan favorite. In just the third game for the Grizzlies without Gasol, Leuer scored a career-high 23 points while also grabbing 9 rebounds and blocking 3 shots.

Shortly thereafter, Leuer showed off his offensive polish, registering double-digit points in seven straight games. Although the team lost 6 of those 7 games, that is no fault of Leuer's. He did what he has always done in his career, which is doing exactly what he was asked to do. A role player being forced to play close to 30 minutes per game is not ideal, but Leuer performed adequately under tough circumstances.

Once Gasol returned to the lineup, Leuer's minutes drastically decreased to the point where he rarely saw double-digit minutes. This decline in minutes said nothing about how Leuer performed in Gasol's stead though. Rather, it was a testament to just how badly the Grizzlies needed Gasol, one of the premier centers in the league, on the floor.

Certainly Gasol's absence, as sad and harmful as it was for the Grizzlies, was essential to Leuer's continued development, and that's the silver lining there. It served as a try out if you will for Leuer, for the front office to see if he had staying power on this roster, which he proved without a shadow of a doubt that he does.

Versatility is coveted in today's NBA, and Leuer has it in spades. Since entering the league, he's demonstrated a propensity to play as a stretch four that can really spread out the defense with his jump-shooting ability. That's certainly not all Leuer can do though.

Looking at Leuer's shot chart gives a better picture of his offensive skill set and how he was able to help the Grizzlies this season in multiple offensive areas. 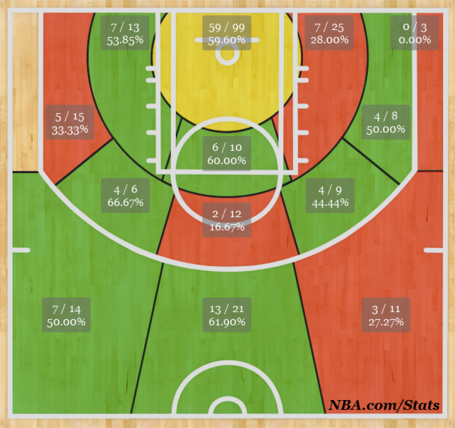 The first, most obvious thing that stands out is all the green. Leuer has long been an excellent mid-range shooter going back to his college days as a Wisconsin Badger. Inside the three-point line, Leuer shot above league average from more spots than he didn't. That's impressive for anybody.

Leuer's range on his jumper is obvious and proves that he's capable of playing in a stretch four role. He was money from behind the three-point line at the top of the key and from the left wing this season. A good portion of these threes came when he was the screener in the pick & roll, which is a testament to him being a mobile big. On the pick & roll, Leuer can perform the roll, pop, and slip all with ease, making him a really difficult guy to guard for many of the NBA's slower bigs that don't like to venture far out of the painted area.

Find out how we thought everyone did this season.

The one spot of Leuer's offensive game that many perceive as his weakness is in the post. He's never shot better than league average from the restricted area, although it should be noted that he has made slight improvements in that area since entering the NBA. In his rookie season for the Bucks, Leuer shot 57.89% from the restricted area. The next season should have an asterisk next to it because he moved teams and didn't play nearly as many minutes as he did in his rookie season. Therefore, the next season to logically compare that rookie shooting number in the restricted area to is this season, where he improved on his rookie number by almost two full percentage points, shooting 59.60%.

It should be said that Leuer has nice post moves. Sometimes this season, he seemed to be overcome by his size/strength disadvantage in the post, but he demonstrated plenty of good post moves that got him decent shots. Going forward, he will have to figure out how to finish more of the good looks that his post moves get him.

Defensively, Leuer is Zach Randolph's opposite. He's mobile and can defend well away from the basket, making him a lot closer to the ideal big to guard the pick & roll than Randolph is. However, he struggles in the same area defensively that he does offensively: the post.

Leuer did a fine job of using leverage to stay low in his stance in order to keep guys from overpowering him in the post, but this didn't completely mitigate his strength disadvantage. Crafty bigs would sense that he was leaning too much into them and then just spin baseline for an easy dunk. Also, bigger guys with longer arms could essentially shoot over him whenever they wanted, which was a problem. There is no perfect way for a guy like Leuer to defend the post, hence why he is not great at it. However, he's serviceable enough in all areas defensively to be a good role player for the Grizzlies moving forward.

As for the things that aren't really measured in the box score, Leuer is an uncanny hustler, and this allowed him to grab rebounds and get to loose balls that he really had no business getting this season. It's an old sports cliché, but you really can count on Leuer giving you 110% every night, which is a huge reason why he continues to see court time as a role player. Leuer rebounds at one of the highest clips of anybody in the NBA, in part because of the way he positions himself and his rebounding instincts, but mostly his hustle. He rarely does anything stupid on the court, hardly turning the ball over and really only shooting good shots.

With a bloated front court, it was tough for Leuer to find his way onto the court, especially when Gasol was healthy. However, in the minutes he did get, Leuer proved his value to everyone in the front office, and it's quite clear that they recognize his value and plan on keeping him around long-term if they can. After all, there's nothing wrong with having a rock-solid role player. Every team needs more Jon Leuer's.