Ed Davis was likely hoping for more from the 2013-2014 season, and the Memphis Grizzlies likely feel the same way. A player oozing with potential and athleticism continues to struggle with finding consistent playing time for a variety of reasons. Whether it is in Beale Street Blue or another uniform next season, this restricted free agent must improve in a variety of ways to finally fulfill that potential.

Ed Davis is quite the controversial player amongst Grizzlies fans. On one hand, some folks see a player who is "lazy", "confused" and just not a fit in Memphis. Others see the athleticism, the length and the defensive skill set that supposedly makes/made Ed Davis, as Kevin Lipe put it in his recent "Beyond-the-Arc" blog post the "Power Forward of the Future" for the Bears of Beale Street.

As Lipe states in his piece, Ed Davis performs at his best when he is getting consistent playing time. The numbers back this up. When Marc Gasol was out, Ed Davis averaged his highest minutes of the season (20 per game in December, 18.6 in January) and played some of his best basketball. Here are Ed's numbers during that stretch of time, from November 22nd to January 14th.

His shot charts bear out the fact he is better in minutes as well. The first chart on the left is Ed's performance during that 21 game run from November 22nd to january 14th, the second on the right is Ed's season overall chart. 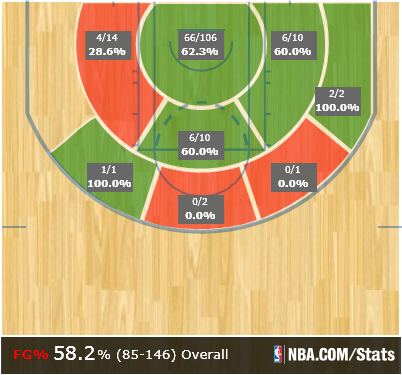 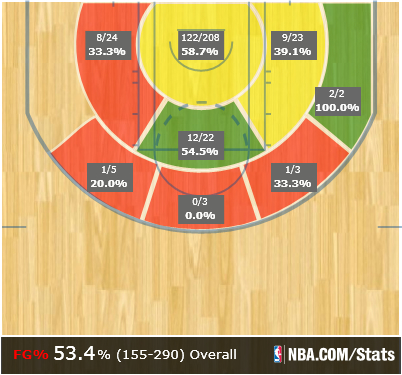 Ed Davis was one of the top finishers at the rim in the entire NBA during Marc's injury, shooting 5% over the league average in the lane. He also was extremely effective in the pick and roll, especially with Nick Calathes. Defensively, Ed's presence is undeniable. He is statistically one of the top defenders at the rim in the entire Association, altering shots with length and athleticism that is impossible to teach, as is referenced in my write-up from earlier in the season "The Ballad of Ed Davis." Here's a quote from that article, written back in March.

Defensively, Ed is still a force protecting the rim. Opponents are shooting 40.1% at the rim against Ed Davis for the season. That is better than Serge Ibaka, Roy Hibbert and Andre Drummond...

Lofty company, to say the least. This was part of an article in which Ed Davis' disappointments were outlined; the lack of growth in his offensive game all the way back to college and his inability to mentally prepare for his role on this Grizzlies team off the bench. Ed Davis no doubt struggled at times on the court, having issues catching passes and rebounds while being out of place on both ends of the court sporadically. However, that is to be expected to a degree when playing time and role are in limbo as much as they were for Ed Davis when the Grizzlies were healthy.

Ed's role on this team as it is currently constructed is and was that of the 4th big behind Gasol, Zach Randolph and Kosta Koufos. Is that the best use of Ed Davis? The numbers and tape say no; Ed is at his best when he plays 20+ minutes a game. He did not get that consistently this past season in Memphis, and he did not respond to this role on the roster well.

One Area of Reinforcement and Refinement for Ed.

Reinforcement- Aggression in the Lane

As stated previously, when Ed got consistent time he was a terror in the paint. Scoring the ball on alley-oops and finishing offensive rebounds, Ed's athleticism was on fully display often and it was effective. Defensively, a player with the skill set of Davis creates so many issues for teams who hope to attack the rim and score the ball. When focused, his help defense contributed immensely to that 98.4 defensive rating that Ed built during the season. This dominance in the lane will make Ed attractive to teams moving forward in restricted free agency, whether it be Memphis or another team.

Refinement- Development of the Outside the Lane Game

"The Ballad of Ed Davis" was called Forever Young for a reason: Ed Davis' offensive game, while effective in extended time, is still not as far along as you would hope for a player three years into their NBA career. Ed still lacks a back-to-the-basket game on the block, and his mid-range jumper (which would be so valuable as a counter to teams clogging the paint due to his roll ability off of picks) is inconsistent at best. If Ed Davis is going to be a NBA starter, he needs to evolve his offensive game so that it is not so one-dimensional.

And it is a low C. An average season for Ed. In increased time, he had an impact and helped the Grizzlies keep the ship afloat while Gasol was out. When Marc was healthy, Ed's role was in flux and he suffered for it. A good chunk of that is his fault; in the NBA, you must always be ready despite your role. He was not able to do that the past season and a half nearly enough. Moving forward, Ed's future is likely attached to that of Zach Randolph; Memphis is likely to offer Ed his offer sheet so they have the right to match any offer made to him, but if Z-Bo returns and a team like Charlotte, Dallas or the Los Angeles Lakers offers him a big/intense contract (3 years $24 million, for example), Memphis will likely part ways with Ed.

However, if Zach opts out and leaves for greener pastures (not likely at this point, but still possible) or opts in to his $16.5 million player option and possibly gets traded, Ed Davis' return to Memphis is much more likely. A 3 year $20 million contract for Ed in MEM without Zach would save the Grizzlies about $10 million a season compared to Zach's opt-in, and as Ed has shown both in Toronto and here in Memphis when he gets consistent time he can play and play well. This would enable the Grizzlies to have more wiggle room when it comes to improving the roster, in particular the Small Forward position.

So, Ed Davis waits for Zach's decision and the Grizzly Front Office's response. Hopefully Ed is refining his game so that wherever he is next season he can take advantage of opportunity and begin to more fully achieve his potential.