Steady as she goes, Zach Randolph's play was one of the few constants during the tumultuous season the Memphis Grizzlies recently concluded. Z-Bo rebounded, scored and helped carry the team into the playoffs. How Zach re-invents himself heading in to next season (and his next contract) is one of the main storylines of what has already been an intense offseason in Memphis.

If you had told Portland Trailblazers fans 10 years ago that Zach Randolph would eventually become a beloved member of a community and the steadiest presence on a roster for an entire season, they likely would have laughed at you. The man they call Z-Bo has certainly come a long way from his "Jailblazer" past, and while he is still not perfect he certainly has become a Memphis icon. He is embraced by a city that many feel he personifies; rough around the edges, hard-working, determined and blue-collar, Zach and Memphis do appear to be a match made in mud heaven.

On the court, Zach was there for the Grizzlies when you needed him more often than not this past season. Marc Gasol, Tony Allen and Mike Conley all missed significant amounts of time this year with a variety of ailments. It was Zach Randolph who chugged along, again averaging a double-double for the season and continuing to frustrate opponents with his low center of gravity and "old man game." When Zach had it working in the post, be it high or low, it was violent poetry in motion.

Defensively Zach struggled at times, as did much of the team with Marc Gasol being out for so long. Z-Bo especially missed his "brother from another mother" in this area; between his ability to call the defense and opposing team's offensive sets as well as his length/timing, he could take on the best big of the opposing team and allow Zach to rest a bit more defensively. Zach has never been known as a defensive monster, but his footwork was slow throughout the year, especially in reaction to various pick and roll/pop situations.

This lack of lateral foot speed showed itself a good bit in the Oklahoma City Thunder playoff series. Against a set of bigs who could match his physicality, Zach did not have the athleticism or length to make OKC pay for the way they defended him. Check out Zach's season shot chart on the left as compared with his playoff one on the right. 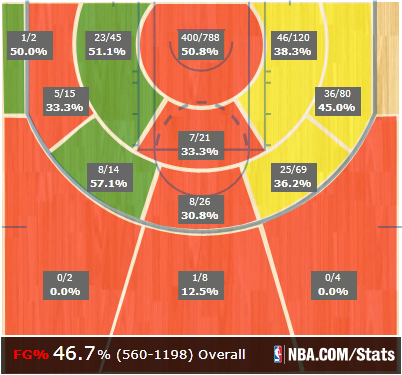 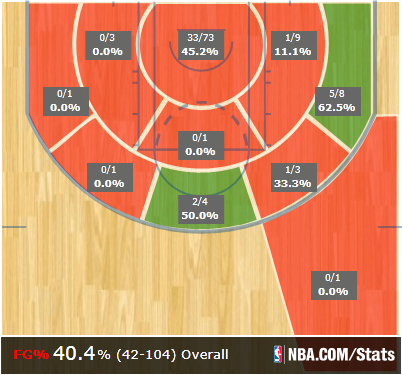 To be fair, anytime you play 6 games against Serge Ibaka and the OKC defense instead of a set of inferior teams, percentages will fall. Marc Gasol's performance shooting wise dropped more than Zach's did. However, Zach's lack of finishing in the lane and inability to convert his jab-step jumper hurt his game a good bit. His offensive rebound numbers were down as well despite playing 5 extra minutes in the playoffs, affecting another area that he could have helped the team. The loss of more efficient  Zach play, in addition to other factors, cost Memphis the series (and the loss of Zach completely for Game 7 did not help matters.)

Reinforcement and refinement for Zach Randolph.

Watching tape of Z-Bo this season and just watching the season unfold as it happened it became clear that Zach was moving the ball better than he had in a while. The numbers back this up. Randolph averaged an almost whole assist higher this season than he did during the previous two. His highlight reel above showed great examples of this; whether he was playing off of Marc Gasol in high-low post sets or dishing to a slashing Tayshaun Prince or Tony Allen, Randolph became more of a creator for others in 2013-2014. As his game evolves with age, if he could force teams to respect his ability to facilitate more it could allow more space for him to work that he will need to compensate for loss of foot speed.

Much of the criticism of the Grizzlies roster as constructed is that there is no set end of game go to guy. Mike Conley has fit in to this role some, but at other times it has been Zach Randolph. Z-Bo isolation plays in spots have become like Rudy Gay isolation plays of the past in that they stop set offense in crunch time situations with ball movement often dying in Zach's hands. You can appreciate that willingness to be "the man" to an extent, but at times this year it came at the expense of attempted comebacks. Here are Zach's shooting numbers when the Grizzlies were behind in specific situations (data from media.nba.com/stats)

Compare that with Mike Conley's 58.3% and 48% scoring percentages during those same periods of time and in come-from-behind situations it would appear Conley is better suited to lead that charge. Z-Bo's percentages are far better when the team is ahead (46% and 48.7% during those times) so Zach can certainly help close out the game. Z-Bo should make sure Conley gets first dibs on scoring the ball when the Grizzlies are down moving forward.

Zach gets leniency defensively for his partner in crime Gasol being out. Z-Bo had a very good season, and without him there's a good chance the Grizzlies don't stay afloat during those Gasol-less days. The key to this offseason (before the insanity of the past 8 days) was Zach's return and how it happened. I have always been of the opinion that Zach at a good price for the franchise is a fine move going forward. Z-Bo at $24 to $33 million over 3 years would be a fine window, especially if the contract was in descending order (i.e. $12, $10, $8 million.)

Zach could also opt out and find greener grass elsewhere, with a team with cap space who is willing to overpay to get the likely best PF available if he opts out. Zach at 3 years $39 million or more would be hard for him to turn down, and the Grizzlies would be wise to not pay that amount. Of course, Zach could decide to take the guaranteed money now and opt in to his deal using his player option for $16.5 million this coming season, which would hamstring the Grizzlies cap wise and lead into another season of contract uncertainty, not ideal considering Marc Gasol is up for renewal himself after next season.

Zach has been a huge part of this Grizzlies franchise since his arrival. His return is probable, but under what terms? Will Peragate affect his decision making? Will he truly take less to help build a winner long term? Or will he opt in or look for more cash in another NBA city?

Time will tell. One thing is for sure, whether or not you see him as a long term fit for the Grizzlies, this much remains true-