I tried to refrain from writing opinion pieces about Tayshaun Prince during the season. Most of what I wanted to say was probably obvious, and it wouldn't help anyone if I suddenly wrote a thousand words on why Prince is bad. I'm not going to beat around the bush here: in review, Prince was pretty much a train wreck this season.

The fine folks at GBB begin our series of season player grades with a player who took a big leap forward this season.

What picture is painted by the Advanced Stats?

Grading the Grizzlies: Mike Conley What picture is painted by the Advanced Stats?

Between diminished athleticism and arguably the NBA's most painful jumpshot, it's clear that Prince doesn't have the tools to succeed anymore. It's hard to name a single other team in the league that would be starting him, but here we are with the Grizzlies having started the 34-year-old in all but one of his 83 games played this season. The one exception was the season-ending Game 7 against the Oklahoma City Thunder, where Dave Joerger getting creative after losing Zach Randolph to suspension. Yes, it took Joerger that long to realize that starting Prince maybe wasn't for the best.

Unfortunately, the Grizzlies found themselves in the odd situation of playing Prince's minimal production out of the starting small forward spot, but also having no sure bet that anyone else on their roster was better. James Johnson and Mike Miller were both successful in their own roles and obviously very popular, naturally leading everyone to prefer them over Prince, but they had their own drawbacks (consistency/shooting and defense respectively) that made the decision less clear-cut than it can appear.

So yeah, it was frustrating and also difficult to solve when Prince remained the starter with per-36 regular season averages of 8.4 points per game, 4.3 rebounds and 2.2 assists on a .438 True Shooting Percentage that tied for sixth-worst in the league. Seventeen guys in the NBA had per-24 stats that were higher than Prince's per-36s, including Lance Stephenson, Nenê, Spencer Hawes and Michael Carter-Williams.

The positional intelligence and length that made Prince so successful in the past has been reduced to a lifeline, as now even smarts and a 7'2" wingspan can only bail him out of his own physical limitations once in a while. He doesn't have the lateral quickness to keep up with many players or recover after defensive missteps, and even with his length, Prince is missing the speed or vertical lift needed to dominate the glass or rack up steals or blocks. There are a bunch of other guys in the NBA making a career with a similar athletic profile, but most of those guys are bringing a specific something else to the table.

Though he somehow put together a 40.4% three-point percentage last season (a bit unnatural even by his own career standards), Prince's outside shot finally and completely fell apart this season. Even after the success of the Courtney Lee trade, the Grizzlies have been suffering from ineffective floor spacing in their starting lineup for a couple years now. These days Prince is the number one offender: he shot 29.0% from deep this season. Our own Andrew Ford did a great job breaking down the problems in Prince' shot form earlier this season, and also important, GBB boss man Chris Faulkner posted a gif of a trebuchet in the comments that went blue. Personally, I always saw Prince's shot form as more like a rubber band finger gun.

If you look at the shot chart, Prince maintained a salvageable percentage from one outside area: the right corner where he shot a solid 39.3%. Nearly half of his three-point attempts came from that area, and the corners are the ideal location to put a three-point shooter because of its seclusion from the rest of the court and the reduced distance from the basket. 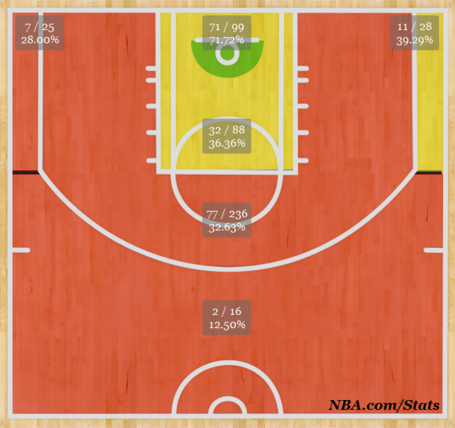 With Prince this season, it felt like it was all about silver linings. I think Joe is still recovering from his "bright side" trip after digging for the positives Prince brought (actually a very worthwhile read - always have to know both sides!), but we were all looking for answers as to why Prince was still starting.

For all the good 39.29% from the right corner is, that's not a silver lining. It's grasping at straws, hoping to find any element of good in what was a stopgap measure at best. Nobody was respecting Prince from any location past 16 feet on the court, and honestly, that's 28 attempts from one specific location being weighted against all of the red on the rest of his shot chart.

Soul-searching can lead to filler at best. In the interest of factuality, little things existed: Prince contested shots well, offered solid tertiary passing out of the small forward spot, mixed in solid post play and positioning, and is by all accounts an outstanding locker room presence.

But it's all too easy to poke holes in those arguments. A few hesitation moves or a pick against him can shake off Prince at this stage of his career without tremendous difficulty. The passing he offered was of minimal value when the Grizzlies alternated between throwing the ball into the post and launching Mike Conley out of the pick-and-roll every possession, and Prince posted a career-low assist percentage this season (8.9%). Solid post play is a double-edged sword that can encourage running an inefficient play type, and even being able to read the floor well meant only a garbage basket every once in a while for Prince. The intangibles are always great to have, but like everything else said here, they make neither a 25.9 minute-per-game starter or a $7.2 million player.

In a season fraught with different sources of frustration, Prince had the poor luck to be put in a situation where he was the most constant one of them. I think the minute split was far from perfect with James Johnson being relegated to a bit role near the end of the season, but it's hard to lodge a significant and constructive complaint. Prince is, at the very least, steady in his production; there are times where Johnson just blows up in your face. Mike Miller was great as a three-point specialist off the bench this season, but he's the kind of defender that offenses will gladly exploit. Prince isn't an explosive energy guy like Johnson or a lights-out shooter like Miller, but he's a necessary scapegoat for the weaknesses that holds those two back.

In the end, what Prince has been reduced to is a sign of what he is for the Grizzlies. A scapegoat, yes, but also a stopgap. A team succeeds by trotting out their best players, and while Prince was far from that, Joerger felt he the Grizzlies' best option. He served as a lifeline for a team that lacked anything definitively better. The silver linings were a figment of imagination for those determined to find a positive, but at the very least, Prince was the railing that held the Grizzlies back from falling over entirely.