The Nuggets are represented by VancouverGrizz at number 11.

The Denver Nuggets are in a tough spot. They already have 13 players under contract for next season, they're capped out with a payroll of $65.7 million, and their six highest paid players are all under contract for at least 2 more seasons, so they don't even have any useful expiring deals for trade purposes. And oh yeah, they play in the Western Conference and they suffered a 21-game dive in the standings this past season. No wonder GM Tim Connelly looks so confused all the time. 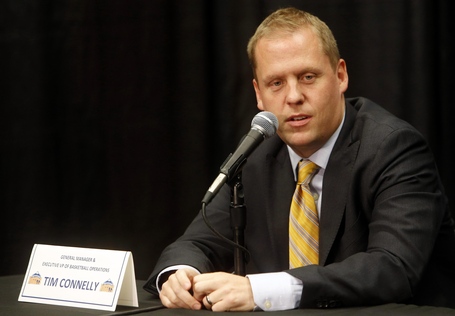 But the road back to contention might not be as difficult as it seems. That 21-game drop is not because they fired George Karl, but mostly because their young core was decimated by injuries. Point guard Ty Lawson, the team's co-best player with Kenneth Faried, missed 20 games. Small forward Danilo Gallinari, who was emerging as an outstanding shooter the year before, missed all 82 games. Even center Javale McGee, who was mostly a joke in Washington but showed flashes in his first stint in Denver the prior year, missed 77 games. (If they weren't comfortable with McGee, they wouldn't have made the disastrous trade of Kosta Koufos to the Grizzlies for Darrell Arthur).

A return to health from these three players, plus retaining Faried and ideally getting more growth from him, makes for a very solid foundation. It may not be championship-calibre, but at least good enough to return to playoff contention. And best of all, the oldest of these four players is Lawson, who turns 27 in the first month of next season.

So the path forward is to simply add another solid piece that offers a decent chance of becoming an upper-level rotation player down the road. And no, high-end lottery picks are not required to pick up this kind of productive asset. See Ty Lawson (the #18 pick in the 2009 draft) or Kenneth Faried (the #22 pick in 2011). The Nuggets have the 11th pick this year, the same slot that produced Klay Thompson three years ago as well as the reigning rookie of the year from last year's draft, Michael Carter-Williams.

With the 11th pick in the 2014 NBA Draft, the Denver Nuggets select:

I considered Doug McDermott in this slot, but he would significantly overlap Gallinari's existing skill set. But I went with Harris largely because I'm a big believer in the importance of age. McDermott turns 23 midway through next season while Harris will play his entire rookie season at age 20. McDermott is currently a far better player, but the more relevant comparison is not how good they are now, but how good is McDermott when he's 25 (after 2 years in the NBA) versus how good will Harris be at 25 (with 5 years of NBA experience under his belt).

And the upside of Harris is just too good to pass up. He's a decent outside shooter - he shot 41% on three-pointers as a rookie before dropping to 35% last year. Add that to his ability to penetrate, solid defensive fundamentals with the physical tools to excel on that end of the court, and even the potential to grow into a primary ball-handler, and the Nuggets have a lot to be excited about.