One of Memphis' sons has returned home to play for the hometown Grizzlies. A dream come true, to be sure, but from a basketball standpoint does the selection make sense? In a word: yes.

Not the Memphis Grizzlies, and not Jarnell Stokes. Jarnell, the Memphian who was number three on the Grizzlies' Big Board of prospects after Memphis' 22nd overall pick Jordan Adams and Rodney Hood according to Chris Herrington of the Commercial-Appeal, certainly has a good bit of the 901 in his game. A bruiser on the block, Stokes showed tremendous strength while averaged a double-double for the University of Tennessee this past season. He has a knack for grabbing offensive rebounds and is aggressive scoring while facing the basket. He makes up for a lack of length with timing and positioning, is mentally tough and has been known to wear a head band.

Sound familiar? If not, here's a video hint.

You don't have to stare too hard to see a lot of Zach Randolph in Jarnell Stokes. It would be a mistake to blindly make that comparison fully, however. There are intricacies that make Stokes a potentially great compliment to Zach ad a back-up Power Forward. For instance, J-Bo has more ability at this stage in his young career to play above the rim consistently than Z-Bo. He also averaged at least one block a game while at the University of Tennessee, showcasing defensive awareness in the post.

Zach's offense is of course more refined at this point, but while Stokes needs to upgrade his post moves he is a solid finisher at the rim. Check out his shot chart from SEC/Postseason games for Tennessee. 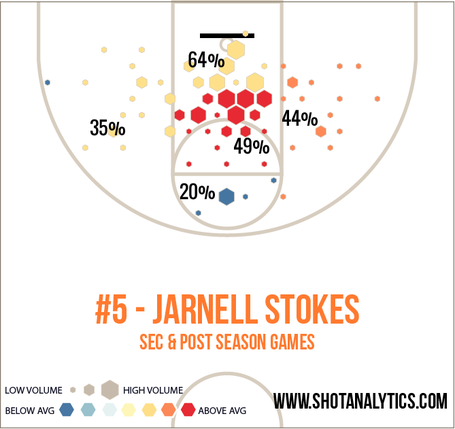 That 64% number at the rim is promising, as is the 49% from 6-8 feet. Stokes certainly needs to develop a mid-range shot to take his game to another level, but there is a lot of potential to work with, especially with a Zach Randolph to learn from.

The concerns with J-Bo are similar to the ones with Z-Bo. There is a real possibility Stokes will struggle with the consistent length and size of NBA bigs. While he has a 7'1" wing span and has tremendous strength going for him, how he combats those that are longer and taller than him will bear monitoring. It is unlikely, but possible, that due to this Stokes could be more like Reggie Evans, who has had a solid but not terrific NBA career, than Zach Randolph.

Belly of the Beast: Draft Nite from the Media Room

GBB's writer Chip Williams was at the FedEx Forum on draft night inside the media room. See what his experience was like. Included: Jordan Adams and Jarnell Stokes audio.

Belly of the Beast: Draft Nite from the Media Room

Stokes is also a bit of a tweener height wise; he clearly is too big to guard Small Forwards, but his lack of height and foot speed could hurt him against stretch and athletic power forward types. Jarnell will be seeing bench NBA bigs most of the time, though, so there will be an opportunity for Jarnell to grow into the position.

That position will be that of the fourth big off the bench, behind Kosta Koufos. Memphis has selected Ed Davis' replacement, more than likely, and while J-Bo is not the athlete Ed Davis is he will rebound at a high clip and for a cheaper price than Ed Davis will likely command in Free Agency. Jon Leuer is still on Memphis' radar, and could take minutes from Stokes, but they complement each other well. Leuer's weaknesses offensively are Stokes' strengths, and vice-versa. Minutes will likely fluctuate between the due depending on match-up.

J-Bo has a wonderful opportunity to learn from and play with a player in the Association very similar to him. He also will be working with Marc Gasol, who can help Stokes grow the play-making aspects of his game and his mid-range touch. He is in a place where he can grow and contribute from this day forward. Hopefully the hometown kid takes advantage.