Unless a major move is made this Summer via trade, the Grizzlies will likely be looking to improve the roster in smaller, more subtle ways. What are the top 4 most pressing needs, and who can help Memphis get back to the Western Conference Finals and beyond next season? We take a look at two of those weaknesses, and how they can be filled, in part 1 of the series.

Share All sharing options for: Ballin' on a Budget: The Memphis Grizzlies Top Four Needs in Free Agency: Part 1

Before we begin, I would like to thank everyone for all of the kindness shown my way as I moved from Memphis to Virginia. I would especially like to thank Chris Faulkner for the wonderful piece he did on me. I will always cherish my time in Memphis and look forward to resuming my work for Grizzly Bear Blues this week, starting with the following article.

As the NBA Finals push forward, the end of the season is close at hand. Soon enough, a champion will be crowned and 29 other teams will begin trying to figure out how to unseat the best team in the NBA. Or, 26 or so teams will be doing that and 2 or 3 teams will begin tanking for Emmanuel Mudiay, Jahlil Okafor and Cliff Alexander. Either way, a new year begins with the NBA Draft and several days after the start of Free Agency.

A member of GBB will represent each pick in the draft, make the player selection and give their reasoning for the pick.

Memphis has never been a real power on the Free Agency market. In a small market city that already has big contract deals invested in Zach Randolph, Marc Gasol and Mike Conley and another $18 million or so tied up in Tayshaun Prince, Tony Allen and Courtney Lee next year, the Grizzlies will be up against the cap. Because of this, they will be unable to offer the big money it may need to acquire some of the bigger names on the market (i.e. Carmelo Anthony.)

Besides, in theory the Grizzlies are in a place where a tweak here or there could result in another memorable playoff run. Memphis, when healthy, is at worst a top 6 team in the Western Conference and at best top 3 or 4. So, with all of the leading men more than likely in place, what is still needed for the Bears of Beale Street to continue the Super Aggro Crag like climb up to a potential NBA title? In part one of this series, we will take a look at two of the top four needs of the Grizzlies in the eyes of the ArmChair GM and how those holes can possibly be filled in Free Agency.

If we use the ArmChair GM's projected Cap number of $64.6 million between 13 players, only the Mid-Level Exception can be used to make moves. The nice thing about the MLE is, the $5.3 million can be divided among multiple players, or spent on just one. The following two needs are not highest on the priority list, but if filled could possibly move the needle a little closer toward a Grizzly title.

Nick Calathes was having an above-average to good rookie season in the NBA. Unfortunately, he was suspended for a violation of the NBA's Anti-Drug Policy before the Oklahoma City Thunder series and still has 13 games of his 20 game suspension to serve. Beno Udrih, while a valuable piece during the OKC series, could look for greener pastures in his own free agency, and Calathes himself has a non-guaranteed contract for the upcoming season. While it is not likely, it is possible Memphis could be in the market for a back-up behind Mike Conley...again.

[#3] Devin Harris- Not exactly earth-shaking. Injury prone, he only played in 40 games this season and has lost some of the athleticism/quickness that made him dangerous earlier in his career. In those games he played, he shot 38% from the field and 31% from 3. He is past his prime, but he is tall at 6'3" and a veteran who can fill a void. He can attack the basket (3 Free Throws Attempted per game) and create for others (4.5 assists in 20 minutes per game.) He also had a very good series against San Antonio for Dallas in the first round of the playoffs; here is his shot chart from that series. 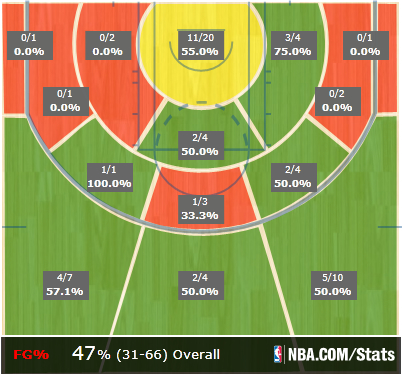 Promising, considering he was healthy and upped his minutes up to 25 per game during the series. He also will likely be cheap; he made about $1.3 million this season, and it is unlikely he commands much more than that on the open market. Not the best option, but not a terrible plan E if Calathes, Beno and one of these next 2 guys falls through.

[#2] Ramon Sessions- If you're a fan of getting to the free throw line, you will be a fan of Sessions in Beale Street Blue. Sessions got to the line 5 times a game last season, shooting 81% from the charity stripe. He is another bigger point guard at 6'3" and can give opposing teams a different look off the bench. He is also younger at 28, so more minutes/some starts here and there would not be too hard on his body. He has experience contributing in multiple roles. Playmaking would be Sessions' speciality as a Grizzly, getting to the paint and to the line.

A major flaw in his game? He cannot shoot the 3; 28% for the season from range. In a lineup featuring Quincy Pondexter, Courtney Lee and/or Mike Miller, this would not matter as much. Put him alongside Tony Allen and Tayshaun Prince for too long, however, and you've got problems. Sessions will also likely command either too much money, close to the full mid-level exception, or multiple years due to his youth. 2 years $11 million or 3 years $13 million may be too big of an investment for that position.

[#1] Kirk Hinrich- Another player who has had health issues in the past. However, a large part of that can be attributed to playing outside of his ideal role; the health (or lack thereof) of Derrick Rose in Chicago forced Kirk Hinrich to play far more than he likely should at this point in his career, averaging 29 minutes per game over 121 regular season games.) He would not be asked to carry that load behind Mike Conley, but he would be a player who could come in and not miss a beat.

He is 6'4", so a taller point guard, who can defend multiple positions. He is also extremely tough and intelligent, so he would fit in to Memphis' scheme and mindset perfectly. He is a career 38% 3 point shooter as well, so he could threaten from range. He would allow Mike Conley to play off the ball some, and his experience in the playoffs would be quite valuable. He will likely be more expensive than Harris, though, somewhere in the $2.5-$3.5 million range. You could take Kirk Hinrich at 2 years, $6 million and rest easy know that your back-up point guard void is filled for 2 seasons. That's not something that can be said in Memphis too often.

Unfortunately for all of the Ed "Boss" Davis fans out there, he is likely not going to be a Grizzly heading in to next season. The Restricted Free Agent will either be paid to start elsewhere or sign and traded by Memphis for another piece if/when Zach Randolph returns to the Bluff City. Kosta Koufos has been a very good 3rd big off the bench, but Memphis could use a 4th guy who can provide something outside of Koufos' length and rebounding prowess in the paint. Jon Leuer may be ready to fill this role, but just in case he isn't here are some players who Memphis could target.

[#3] Jan Vesely- This pick is based off of the dreaded p word- potential. Vesely is seven foot tall and tremendously athletic for that size. In situations, he could defend small forwards and could easily play against various stretch fours that are becoming more common place in the Association. Offensively he is limited and his confidence has been destroyed due to his lackluster-at-best performance in the NBA so far, but you cannot teach athleticism and length.

He also would be CHEAP; Vesely will likely not see much more outside of $1-$1.5 million per year, leaving plenty of room for another player to be brought in under the MLE to fill another need. It is not too often you find 24 year old seven footers at that price. He provides Memphis with versatility in that 4th big competition; in some spots, him alongside Gasol or Koufos would provide a different version of the "Twin Towers" look. Plus, if the Jonny Badger advances his defensive prowess he can step in and Vesely can become the 5th developmental big. Low risk, potentially high reward.

[#2] Patrick Patterson- If potential and length are not your thing, Patrick Patterson, a Restricted Free Agent, may be more up your alley. Here is a 6'9" 240 lb. Power Forward body who, while he cannot rebound at a high clip for his position (5.3 rebounds in about 24 minutes per game last season) can provide a skill as a stretch four not given by Ed Davis. Here is his shot chart from this season. 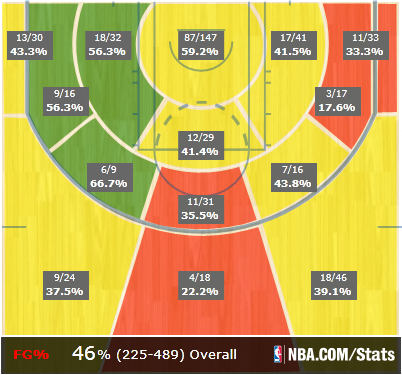 Not your typical power forward. He excels in the midrange game and has the capability to be a good 3 point shooter consistently, hitting 36% of his beyond-the-arc attempts in 2013-2014. He also can defend his position well enough to be effective, boasting a 100.8 defensive rating in Toronto this season. Jon Leuer's was 106.8 by comparison. Patterson would possibly cost somewhere in the $3.5-4.5 million per year range, but his ability to space the floor and defend combined would be an attractive compliment to the skill set of Kosta Koufos.

[#1] Boris Diaw- One of the most unique players in the NBA has shown his value in the NBA Finals the past two seasons. While he is not the best conditioned player in the Association, he is as versatile an offensive player as there is. This highlight package from the series clinching game 6 against the Thunder shows that on the offensive end.

He is quick enough to drive to the rim against the likes of Reggie Jackson, thick enough to play in the paint and score the ball and skilled enough to hit shots from range. His basketball I.Q. and instincts are impeccable, and a combination of that, size and foot speed allows for him to be able to defend multiple body types and positions, including giving LeBron James a tough time when defended by him. Diaw shot 52% from the floor this season, 40% from three and averaged 4 rebounds and 3 assists per game.

Diaw will probably command around $4-5 million per season after the success he has been a part of in San Antonio. His skill set and smarts are quite valuable however, and that versatility may be worth Diaw's literal weight and the weight he would add on the Memphis financial books.

Six possibilities down, six to go. Be sure to check in Tuesday and see the top 2 needs of the Grizzlies this season according to the ArmChair GM and who could possibly help within the Grizzlies' budget.