We will literally take any basketball we can get. Hello Summer League.

The Memphis Grizzlies have finalized their roster for the 2014 Orlando Pro Summer League, and boy is this group going to be a fun one. For the full roster, check out this handy sheet below. 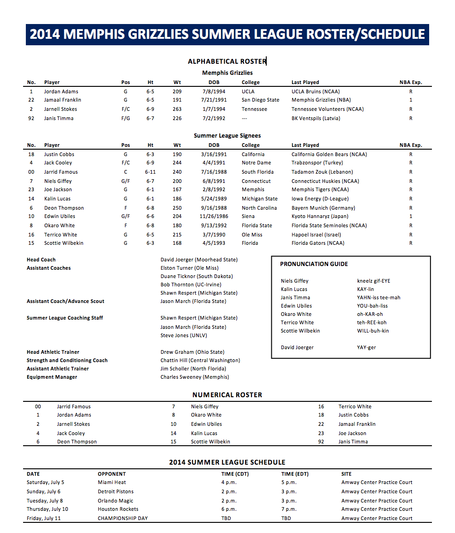 The first time fans will get to take a look at new Grizzlies draftees Jordan Adams and Jarnell Stokes will be on Saturday, July 5th against the Miami Heat. Jamaal Franklin and Janis Timma are the other two guys actually on the Grizzlies current roster that will make a summer league appearance.

Jack Cooley, fan favorite from last year's summer league, will be back on the prowl. He was impressive for the Grizzlies last summer, and it's good to see him getting another chance to prove himself, if not to the Grizzlies then possibly to another team.

Another guy certain to get a lot of love from Griz Nation is former Memphis Tiger Joe Jackson. He's unlikely to make a final roster for an NBA team, but it will be a good opportunity for him nevertheless.

The summer league squad will be coached by Grizzlies assistant coach Shawn Respert, assistant coach/advance scout Jason March, and video coordinator/player development Steve Jones. Interestingly, Respert will serve as head coach for the first three games, while March will take over the role for the final two games.

Franklin, Adams, and Stokes, barring something terrible happening, are the only three guys on the summer league roster that will actually make it onto the Grizzlies final roster for the 2014-15 NBA season.

The Grizzlies have a nice mix of skill sets among this group of players, and they should fair well down in Orlando. If nothing else, at least there will be basketball.