Vinsane in the MEMbrane: Vince Carter's a Memphis Grizzly, Now What?

With Free Agency pieces falling rapidly in the wake of LeBron James' return home, things moved quickly Friday night. Mike Miller leaves Memphis, and Vince Carter arrives. What role could Vinsanity play in Memphis' plans this coming season, and what does a full 15 man roster mean this early in the off-season

Share All sharing options for: Vinsane in the MEMbrane: Vince Carter's a Memphis Grizzly, Now What?

Waiting really can be the hardest part, can't it?

A move was needed like we all need air for the Memphis Grizzlies. Too many Shooting Guards, not enough Small Forwards, the West was adding pieces and Memphis was sitting, watching, waiting. Finally, a move was made, and Memphis rejoiced.

What does all of it mean though? Is letting Mike Miller walk (likely to Cleveland with LeBron James) worth Vince Carter's arrival? What role will Carter play on this Grizzlies roster? Is Memphis, now at the league maximum of 15 players on the roster, done with moves or is something else on the horizon?

While some are concerned about the miles on Vince Carter's tires, even at the age of 37 VC is an overall upgrade from the master of  "Let it Fly" Mike Miller. Yes, Mike Miller is a better 3 point shooter than Carter at 46% to 39%, but the advantage Miller has over Vinsanity really end there. Take for example Miller's shot chart. 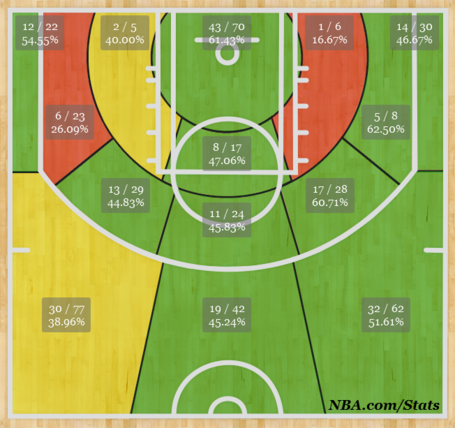 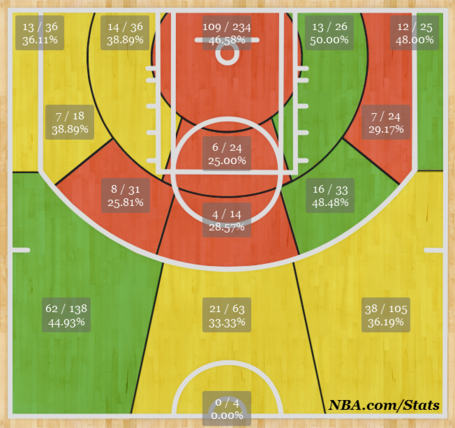 While he isn't the shooter that Miller is, his offensive game is much more versatile than Mike's. Carter attempted over three times the shots in the restricted area that Miller did, showing the capacity to attack the rim and get in the paint. It also showed in his ability to get to the free throw line over twice as much as Miller, adding a dimension to the floor that Mike couldn't provide.

Carter is also a better facilitator than Miller, averaging over an assist per game more per 36 minutes than Mike. As an offensive player, despite his age Carter is a more complete package at this point in their respective careers. His three point shooting is still above average and he check off more boxes on offense than Miller does. Defensively, Vince Carter played on a Dallas team that was 22nd in team defensive efficiency last season. He will have a better supporting cast around him in Memphis and a scheme that will allow for him to play within himself defensively.

Perhaps the biggest number for Memphis fans? His Player Efficiency Rating, or PER (created by John Hollinger) was 15.97 this past season, slightly above the league average of 15. Mike Miler's PER was 12.5. Miller's lights-out shooting will be missed, but in terms of overall production Memphis has upgraded on the wing.

Vince Carter was a starter in the NBA up through the 2011-2012 campaign, having very impressive seasons in what has been an excellent career. He has not played more than 30 minutes per game since 2009-2010 however, and as he has aged his role has changed. The last couple of seasons he has been a sixth man type of player for Dallas, with Vince only starting 3 of the last 162 games he has played in.

This has not stopped him from playing meaningful minutes, however. Carter averaged 25 minutes per game over the past 2 seasons, impacting Dallas in a variety of ways as discussed above. Minutes are minutes, whether they come off the bench or in the starting lineup. Carter has proven that.

As Memphis welcomes Carter to the fold, what his best fit is for the Grizzlies role wise is already up for discussion. Keep in mind that minutes are minutes, and 25 minutes a night, give or take, is likely the best use of Vinsanity at this point. The depth of the wing in Memphis allows for this to be not only OK, but possibly ideal. Say you start Vince Carter with Tony Allen, as Chris Vernon of 92.9 ESPN Memphis recently suggested. TA takes the best offensive wing on defense, Carter adds that offensive versatility that was sorely lacking from the starting SF spot last season. You 2nd unit more than likely looks like this:

As long as Tayshaun Prince is on the roster, he will likely be used in one way or another as a stretch 4 type or Small Forward. Sub any of these guys out for Nick Calathes post-suspension, Jamaal Franklin, Jordan Adams or Jon Leuer if you'd like, and there are a lot of possibilities. Lee becomes a sixth man capable of attacking and scoring on even the best NBA benches.

Now, say you want Vince as the sixth man for some scoring pop off the bench. Sub Lee for Carter, and what do you get? A combination of length and scoring with Q and Carter that will be a challenge for opponents. Either way, Carter can still get his minutes.

As far as end of game situations go, when the minutes matter most, Vince Carter should most likely be on the floor, with a TA/Lee rotation depending on situation. Here are a couple reasons why:

A flare for the dramatic game winning shot. Mike Conley, meet your new partner in closing out games. It will be fun to see what Coach Joerger has up his sleeve with those two in at the end of games.

Is This the End of the Moves?

The call for a "move" being necessary was louder from me than from anyone. Now, it has been made and the roster stands at 15, the maximum number allowed. Is it possible Memphis enters the 2014-2015 season this way? Absolutely; it would allow for the flexibility to send a Jarnell Stokes, Jordan Adams or Jamaal Franklin down to the D-League and still field a full roster.

Also, as has been outlined on this site and on others Memphis seems to be setting themselves up for possibly solving the "scoring starting wing" problem in 2015 Free Agency. Names like Kawhi Leonard, Klay Thompson and, yes, Rudy Gay are possibilities, among others, if Memphis wants to go that route. Carter's addition does not put that into jeopardy while enabling the Grizzlies to improve now instead of watching the Western Conference get more competitive while they don't fix their own roster weaknesses.

Could the right trade still come along that can update the roster even more? It certainly could if the stars aligned, and Memphis has pieces that could still be shipped out. Memphis added a Small Forward, but there are still at least 4 Shooting Guards on the roster; Adams, Allen, Franklin, Lee, 5 if you include Quincy Pondexter. Jordan Adams appears to possibly be the future of the Shooting Guard position in Memphis, so a package involving any of the other names above other than him and Tayshaun Prince is still possible.

However, it may take a pick as well to acquire a Jeff Green or Thaddeus Young. Are either of them worth giving up that flexibility mentioned above, plus a draft pick? A fair question, and one that doesn't have to be answered as quickly now. Vince Carter buys Memphis some of a highly valuable commodity: time.

In an article last week I talked about time and "Adapting or Perishing." Carter's arrival, while a temporary solution, is an adaptation, an improvement to a roster that desperately needed it. The Grizzlies got better Friday night, important in a Western Conference that gets better by the day. Cap flexibility is great, but you don't want to throw away a year of opportunity by not making your team better for it. Tanking, even the high end variety, is not attractive. Now Memphis can evaluate the lay of the land, find a deal that works best for them or wait until the cap-friendly time a year from now.

Memphis' off-season went from quiet to Vinsane rather quickly. Possibly even more valuable than Vince Carter the player is the time that it buys Memphis to stay competitive while searching for its answer to the question of who will be the "Fourth Grizzly King."