So I was listening to the Vince Carter Press Conference, minding my own business, when all of a sudden this Tweet from GBB's very own Chip Williams, who was at the FedEx Forum covering the festivities, caught my eye...

Now it is perfectly rational to believe that Chris Wallace, the General Manager of the Memphis Grizzlies, was referring to simply signing 2nd Round pick Jarnell Stokes as unfinished business. However, this had a hint of something more. Here was my initial reaction...

Not done with moves from Wallace + Joerger's "Marry a Wing" comment= Trade?

The Joerger "Marry a Wing" comment comes from an interview in which Head Coach Dave Joerger acknowledged a bit of a log jam on the wing and making a commitment to a selection of them. Jordan Adams is the Grizzlies' First Round pick this year and will likely be sticking around. Outside of him? Anyone may be fair game...especially, of course, Tayshaun Prince. You will be hard pressed to find any potential deal not including the player who has had an excellent career but is simply past his prime, with a possibly valuable expiring contract to boot.

Is a trade necessary? No, not at this point. Carter fills a void as a playmaking shooter with a versatile offensive game and the return of Quincy Pondexter should inject even more range into an offense that still sorely needs it. Tony Allen is a defensive stopper despite a down season last year and Courtney Lee is a solid two-way player whose arrival via trade last season sparked Memphis on their run to the playoffs. This Grizzlies team can, and will, compete in a crowded Western Conference as-is.

Having said all this, the moving and shaking may not be done as the roster currently stands at 15 players. If the right deal, in the eyes of the Front Office, comes along they will likely pull the trigger. The question is, who may be on the move, and for what?

It Ain't Easy Getting Green

Check it Out in the Trade Machine

Why Boston Does the Deal: Two words- cap space. Between the expiring deals of Prince, Koufos, Rajon Rondo, Marcus Thornton and Brandon Bass Boston would have $39,091,955 dollars coming off of their books. In a 2015 Free Agency class that possibly includes Kevin Love, LaMarcus Aldridge, Kawhi Leonard (restricted), Klay Thompson (restricted) and...gulp...Marc Gasol, the Celtics would be in a position to make a play for one of these players via max deal while signing another player to a decent sized contract. Imagine a Reggie Jackson/ Avery Bradley/Gerald Wallace/Jared Sullinger/Love lineup, with Wallace and Keith Bogans coming off the books of Boston in 2016? Kevin Durant is within the realm of possibility if the Celtics play their cards right roster wise.

Why Memphis Should Do the Deal: Jeff Green is an upgrade on the wing from Tayshaun Prince. He can put the ball in the basket in a variety of ways and could also flourish in a situation where he is not relied upon to be the primary scorer. Twice in his career he has shot 39% from the three point line, showing the capacity to stretch the floor. At 6'9" he provides length at Small Forward that no one aside from Prince on the Grizzlies roster can give on the wing and his $9,445,000 cap hit will not rise if he exercises his 2015-1016 contract player option. Joel Anthony's $3.8 million comes off the books and Chris Babb enjoys his season or two in Iowa before he is waived or traded.

Why Memphis Shouldn't Do the Deal: Moving the affordable deals of Pondexter and Koufos plus a future draft pick to offload Prince and lose 2015 cap flexibility does not seem as ideal once you take a closer look at Green's numbers. Here is his shot chart from this past season: 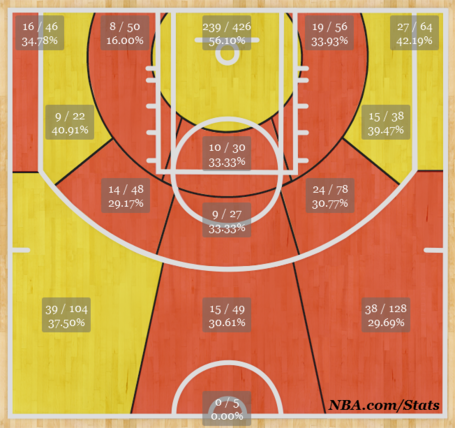 No green for Green, which is not ideal for a player you are paying about $19 million over two seasons to score the ball. Those two seasons of 39% shooting from beyond the arc? 2008-2009 and 2012-2013, fairly spread out and only two seasons out of six "full" seasons (playing 75 or more games) leaves a lot to be desired. He shot 34% last season, which lines up with his career average. He is at best an average defender whose best defensive efficiency number was 104 in 2012-2013 and during that season his PER (Player Efficiency Rating) was 15.01, just above the league average. In 2013-2014 he was at 13.17. Is that worth that much money (and opportunity cost) to Memphis?

The Verdict- Considering the change in flexibility and level of player available in 2015, this is probably not the best use of Memphis' assets. Pass on Green.

Check it Out in the Trade Machine

Why Washington Does the Deal: You may be surprised that the Wizards would be willing to part with a 1st rounder in this deal. Haven't you heard? Paul Pierce's contract, in addition to the expiring deals of Nene Hilario and Andre Miller in the coming seasons, has lead Washingtonians to believe that they will be serious players in the Kevin Durant sweepstakes come 2016. That 2017 pick will be at #25 or higher if things go according to plan.

Washington sees this trade as an opportunity to better the bench big situation this season in Kosta Koufos who can play with both Nene and Marcin Gortat while getting a cheaper bench wing in Quincy Pondexter. They also get a 2nd rounder from Memphis in the process.

Vince by the Numbers

GBB Ranker: Top Wing Player Combos for the Griz Vince by the Numbers

Why Philadelphia Does the Deal: Assets, assets, assets. 76ers GM Sam Hinkie is all about acquiring assets, and he uses Thaddeus Young to snag a 2017 1st round pick. Tayshaun Prince's contract expires after next season, as does Jason Richardson's, clearing up $14 million in cap space. Assets + Cap Space= flexibility to add star players via free agency or trade, and with the core of Joel Embiid, Nerlens Noel and Michael Carter-Williams plus a couple of wings (including Dario Saric when he eventually comes state-side) Philly will become more and more of an attractive option.

Courtney Lee fills the Shooting Guard role for Philly for a season or two as they continue their long-term rebuild, providing scoring and sound defense.

Why Memphis Should Do the Deal: In a perfect world, the Grizzlies would acquire a younger, taller version of Vince Carter; athletic, long, able to create for themselves and others while being having the skill to defend multiple positions. That ideal situation may not exist, even in the vaunted free agent class of 2015. After all, of the possible Small Forward options only Rudy Gay will be an unrestricted free agent, and Memphis has gone down that road before.

However, it is possible that Memphis could Moneyball the situation and re-create that Small Forward in the aggregate. Between Martell Webster and Thaddeus Young the Bears of Beale Street get the best of both worlds. In Young the Grizzlies get a tremendous athlete who defends very well, averaging over 2 steals a game, while rebounding effectively as well (6 per game). He has shown the ability to hit threes and averaged over 2 assists per game this past season.

The concern is whether or not he can play the Small Forward position; he has been a Power Forward for much of his career, including with the 76ers. His athleticism enables him to be a tweener forward who can likely stick with longer wings defensively while using his size and strength to create mismatches offensively. He can drive and create for himself off the dribble, a valuable skill on any roster, much less in Memphis. His season highlights show the variety in his game.

Is Thad Young a first option on a contending team? Probably not. Is he a capable 3rd or 4th option? His skill set would suggest he is, and that he can indeed possibly play Small Forward. Add on the fact that Young is a Memphis product out of Mitchell High School? A moderate risk/high reward acquisition.

Maybe that 32% career three-point shooting percentage of Young still worries you. Allow for Martell Webster to make you feel better. A career 39% three point shooter, Webster can play both wing positions at 6'7" and can also get in the lane. Here is Webster's 2013-2014 shot chart. 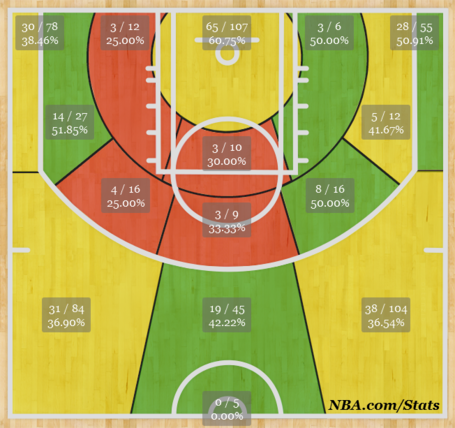 Martell is an efficiency shooter's dream. Of the 581 shots Webster took last season only 108, or about 19%, of them were taken outside of the restricted area but inside the three point line. Martell either gets to the paint or shoots the three, and he is talented at scoring the ball in either fashion. He had an offensive rating of 116 this past season, and 115 the season before. He can play defense well enough within a scheme like Memphis' and even if he struggles at times, his productivity shooting would benefit Memphis more than his defensive issues would hurt.

Why Memphis Shouldn't Do the Deal: Replacing in the aggregate is a gamble. It is a calculated risk that Thaddeus Young can play Small Forward. It is also a calculated risk that Young stays in Memphis post-trade; he has an early-termination clause in his contract for after the 2014-2015 season. If he leaves, you are left with less flexibility in 2015 because of that Webster deal which is about $3 million more expensive than Quincy Pondexter's deal. If Young opted to stay in Memphis the final season of his deal, the Grizzlies' free agency flexibility would be all but gone after re-signing Marc Gasol. The Grizzlies would also lose their back-up Center in this trade, meaning they would have to find someone such as Jermaine O'Neal for the veteran league minimum or trade for a back-up center.

The Verdict- The ArmChair GM is a believer in Thaddeus Young at Small Forward. Webster and Young combined provide everything Memphis needs from that position while enabling Vince Carter, Tony Allen and Jordan Adams to get run at Shooting Guard. The roster is balanced and worst case, the Free Agency window is pushed back to 2016. MAKE THE TRADE.

Is there a trade possible that makes up for the lost cap flexibility to go after a max free agent? Sure, the 2nd trade above would be a good example depending on your view of Thaddeus Young the Small Forward. The Grizzlies will likely refuse any major move that risks that cap space unless it's for a game-changing talent or talents, and that is reassuring to know as the off-season grinds on.