Grizzly Bear Banter with Chip Williams: Jon Leuer is ready to take on an expanded role with the Grizzlies

Share All sharing options for: Grizzly Bear Banter with Chip Williams: Jon Leuer is ready to take on an expanded role with the Grizzlies

While it may feel like the Grizzlies have made a plethora of moves this offseason, in large part they will have the same team returning from last season. In fact, roughly 82% of all minutes played from last year's team will be returning for the 2014-2015 campaign. The most notable missing piece will be Mike Miller who played 1,707 last season in the We Don't Bluff City. Miller's minutes will be replaced, mostly by two "new" players: Vince Carter and Quincy Pondexter. While playing for the Dallas Mavericks last season, Vince Carter played 1,973 minutes while playing 81 games. Pondexter, who missed 67 games last season due to injury, will be returning to the Grizzlies, giving them a true medley of wing players.

Fan favorite (who turned not so fan favorite after an altercation with his significant other) James Johnson elected to sign with the Toronto Raptors in the offseason. Much like Mike Miller, James Johnson's minutes will be eaten up by any number of the wing players currently on Memphis' roster. 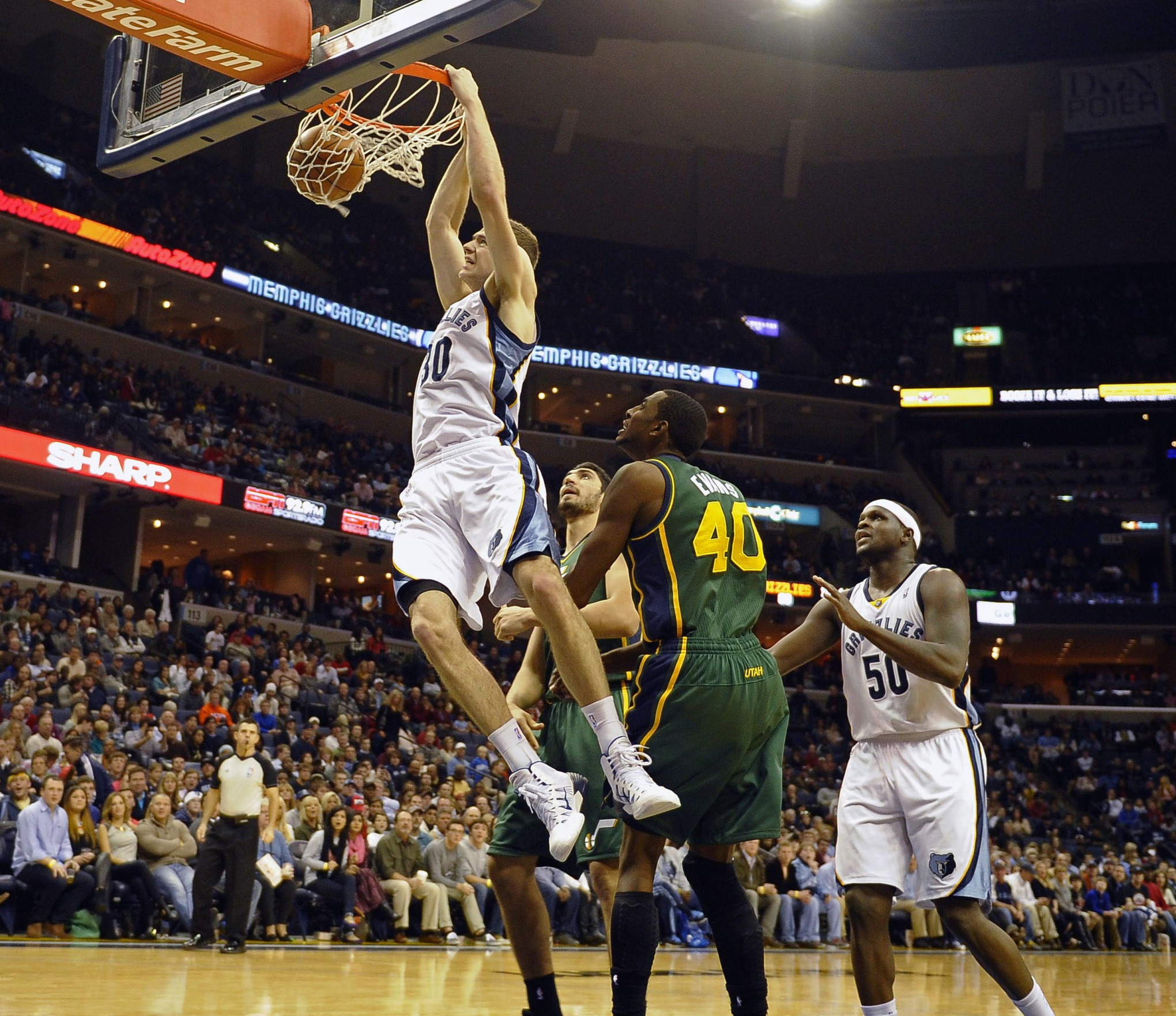 The final departure from last year's roster came when the Grizzlies decided not to extend a qualifying offer to the often displeasing Ed Davis. Ed Davis and James Johnson, surprisingly, played the exact same amount of minutes last season, 956, despite Ed playing in 11 more games than JJ.

It does not take voluminous thought to resolve where Mike Miller and James Johnson's minutes will be disbursed. It is clear that with the deep depth, as my friend and colleague Joe Mullinax so eloquently put it, the Grizzlies have, they will be able to adequately fill the holes left behind by Miller and Johnson. Ed Davis' minutes, on the other hand, are seemingly up for grabs, and there are two players currently on the roster that would fit the bill as a fourth big man in the rotation: the newly drafted Jarnell Stokes and Jon Leuer.

Jon Leuer is an intriguing option. He has the best 3pt field goal percentage (46.9%) of any returning player (Miller led the team in 2013-2014, Leuer was 2nd). If you take a look at his per-36-minutes (or regular starters minutes) he would have averaged 16.9 points and 8.9 rebounds while making 1.3 3pt field goals per game.  His points per game would have been good enough for third best on the team of players who played in at least 45 games (behind only Zach Randolph and Mike Conley). Also, another interesting tidbit from those numbers: Jon Leuer would have averaged more points and rebounds and shot a better percentage than Marc Gasol. Now, in no way am I inferring that Jon Leuer is better than Marc Gasol (although it appears that "the machine" might tell you Leuer is better). My point is, Leuer certainly proved last season, albeit in limited minutes, that he is and can be productive when called upon.

I think I'm most effective as a 4 (power forward) and I think that is what I will mostly be playing next year. -Jon Leuer

Jon Leuer, in the interview I did with him, said he has spent most of the summer in his home state of Minnesota working out and preparing for the upcoming season. "I've just been working out in Minneapolis mostly. I was in San Jose at Robert Pera's facility for a little while. I've just been trying to get stronger. I've put in the work in the weight room to get stronger and more explosive, and also, just a lot of basketball court work too. (I've been working on) expanding my range, working on ball-handling, shooting, you know, everything. I always try to focus on not just one or two things, but a wide variety of things that will help my game for next season."

I found it interesting that Leuer specifically mentioned ball-handling. It is no secret that one of the Grizzlies' glaring weaknesses is the ability to make plays off of the dribble or create shots for themselves. "I think that's one of those things about my game. I do feel comfortable putting the ball on the floor and making plays for myself and my teammates."

One does not typically find too many power forwards with that skill set. I asked Leuer if he had ever been asked to try playing some small forward or if the coaches felt his skills were best used in a stretch power forward position. "I was split to the 3 (small forward) a little bit last year at certain times in certain match-ups, and I feel comfortable doing that. But, I think I'm most effective as a 4 (power forward), and I think that is what I will mostly be playing next year."

I wanted to know what kind of communication Leuer had with Head Coach Dave Joerger, and what Joerger had asked him to work on this summer to improve his game and get himself ready for the possibility of an increased role with the Grizzlies next season. "Yeah, I talk to the coaches a lot. We talked about (me) having an expanded role. Obviously the way the roster is shaking out, it looks like that is a real possibility, but at the same time it comes down to what you do in training camp...and how you've improved. I see my role coming in next year as coming in, working hard everyday, pushing my teammates in training camp, and hopefully getting more minutes once the season rolls around."

Jon Leuer has the opportunity everyday he walks in to practice to go up against arguably the best big-man duo in the NBA in Zach Randolph and Marc Gasol. That is a luxury that is not afforded to every single NBA big. Leuer said in regards to being teammates of and learning from Marc and Zach, "They're two of the best guys in the league to learn from. I think they're the best center-power forward combination in the game. Going up against them everyday in practice has made me a better player. Their approach to the game too; they're all about winning. Every day they come to the arena with (a winning) mindset, and that just kind of resonates with the rest of the team. They're two of our leaders. We look to them to set an example, and they do a great job of that." 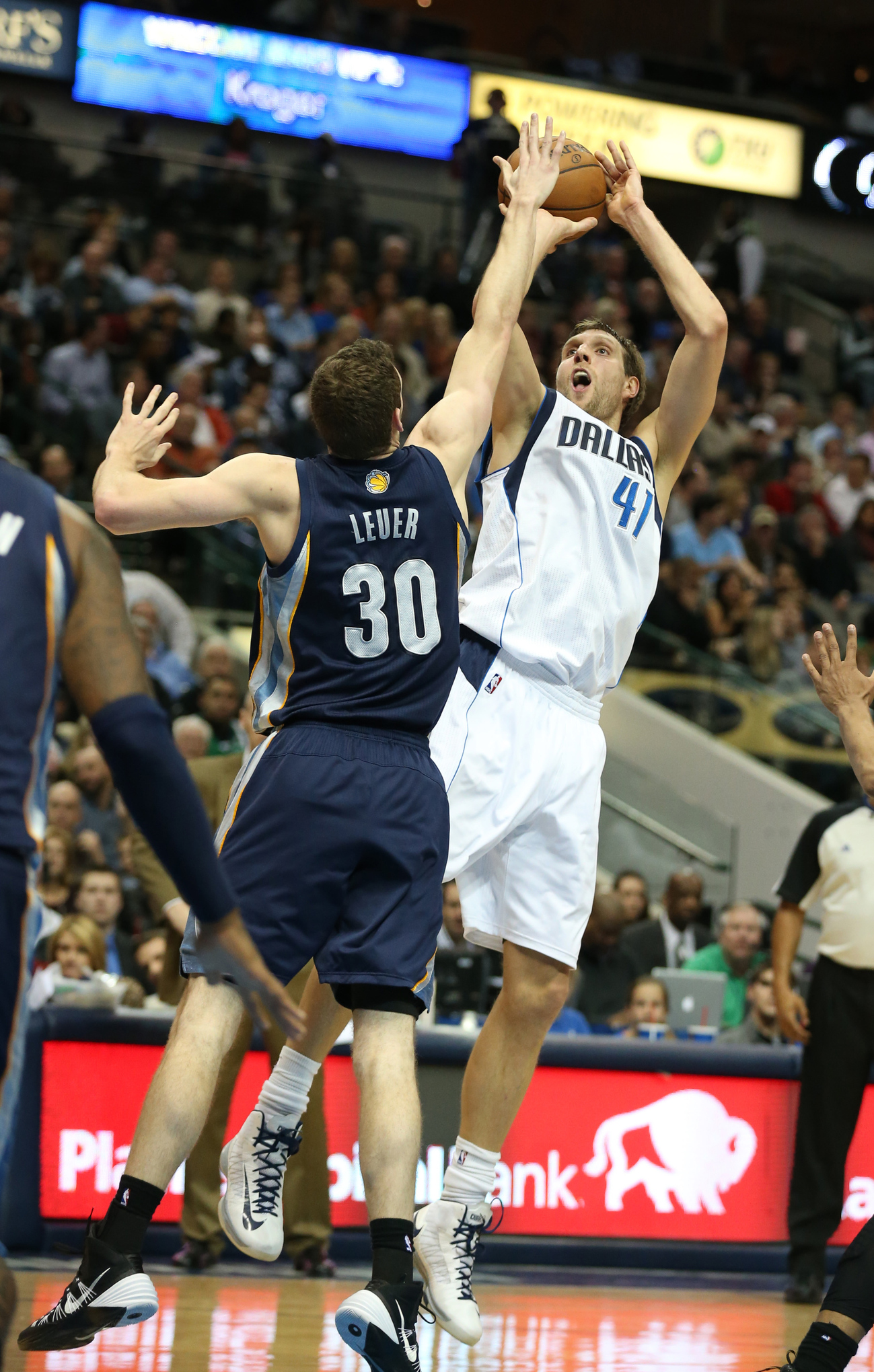 As for the new additions to the Grizzlies roster, Vince Carter, Jordan Adams, and Jarnell Stokes, Jon Leuer said he has not had the opportunity to talk to any of them yet. He did, however, have nice things to say about each one of them. Leuer on Vince Carter: "I know he's a great teammate and a great player. He's a big addition to our team." Jon Leuer on Jordan Adams and Jarnell Stokes: "Seeing what they were able to do in college and Summer League, I was able to catch a few games, I definitely think those guys can help us out."

There is a consensus around Grizz Nation that the Grizzlies are trying to use the San Antonio Spurs model to construct their roster. I asked Jon what he thought about that idea. "What the Spurs have been able to do, I think everyone is trying to look to their model for success in some way or another. They've been doing that for 15-20 years with their core group of guys. We've had a core group of guys here for a pretty long time, and I think you can build the pieces around the core group of Marc, Zach, and Mike Conley. So, I guess you could see some similarities, but right now we have our own identity. We play through the post; we use pick and roll, and I don't know how much you can say that is similar to the Spurs. Again, we have our own identity, we're going to stay true to that."

I shifted gears a bit on Jon to some non-Grizz related questions. First, I wanted to know if there were any players he looked up to when he was younger. Growing up in Minnesota, there was one natural choice, "Watching Kevin Garnett, he was somebody that I always looked up to. I'd even go to his camp in the offseason. Just seeing how he plays the game, how focused and determined he is, you know, that's something that I've always admired." There was a second guy Leuer looked up to growing up, and he said he tried to model his game after this player (which is pretty evident in watching both of them play), "As far as a guy that I kind of take bits and pieces of (his game) when I got older was Dirk (Nowitzki). What he's able to do at the power forward position (such as) stretching the floor, making plays for himself and his teammates, I think those are two really good guys to look up to." (I agree, Jon)

we have our own identity, we're going to stay true to that. -Jon Leuer on emulating the Spurs

Finally (per request) I asked Jon Leuer about any nicknames that he liked or disliked. "(Laughs) Not really. I know the Johnny Badger thing, people were calling me that last year. (Laughs) That one is the only one that I can think of." So, I just wanted to clarify that is was alright with Jon if people called him Johnny Badger. "(Laughs) No it doesn't bother me; I don't care."

(Editor's note: I'm not sold. I still like Leuertenant! -CF)

The opportunity for an expanded and increased role during to 2014-2015 season is a realistic possibility for Jon Leuer. It sounds like he recognizes that and has put in the time and effort it takes to crack the deep, talented rotation that is the Memphis Grizzlies. I think I speak for all of Grizz Nation when I say, "We're rooting for you, Johnny Badger. This team needs you, and we think you're ready. Carpe Diem."