The State of the Grizzlies' Point Guard: Is it better than ever?

With Mike Conley at the helm and the combination of Nick Calathes and Beno Udrih filling in minutes, the Grizzlies' generals are ready to take the team into the Western Conference's elite.

Share All sharing options for: The State of the Grizzlies' Point Guard: Is it better than ever?

The starter has been the mainstay at the position for the past seven years after leading Ohio State to the 2007 NCAA Championship game as a freshman and being drafted third overall in the 2007 NBA Draft by the Grizzlies, two spots behind Greg Oden, his OSU teammate and close friend who is currently on (and probably will remain on) the list of biggest busts in #1-overall pick history.  One backup grew into his role under the guidance of Billy Donovan at Florida, pulling a slightly modified-Brandon Jennings version of playing overseas basketball for cash after his sophomore year, then joining the Grizzlies last season and becoming a key contributor.  The other backup is an older journeyman who was signed late last season, became well-versed in the international style of play, and benefited from his time spent playing the position for Gregg Popovich's Spurs.

That is the bird's-eye view of the background of what Memphis has at the point guard position heading into the 2014-2015 NBA season.  What Grizzlies fans need to be concerned with at this point in time is how these floor leaders are going to carry their success from last season over into the upcoming season.  Mike Conley displayed a workhorse-like toughness, playing through a right hamstring strain to push the Oklahoma City Thunder to the brink of elimination last year.  Nick Calathes was solid in his role of giving Conley a breather once Jerryd Bayless was traded to Boston, but his 20-game suspension for violation of the NBA's drug policy prematurely ended his season.  Beno Udrih surprisingly stepped up and filled in the backup point guard spot nicely during the postseason, winning over Grizzlies' fans along the way. Here is what we should expect out of the Grizzlies' point guards this upcoming season.

Mike Conley Becomes a Household Name in the NBA 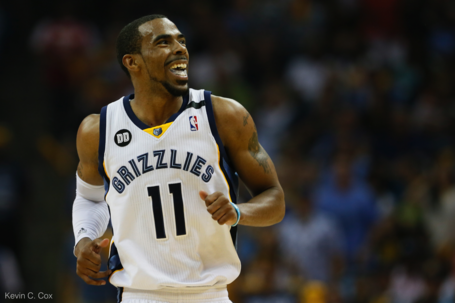 Conley got his first taste of the postseason during the 2010-2011 season...and the team hasn't taken a step back since.  Since that season, the Grizzlies have made one conference final and two conference semifinals in four playoff berths.  Mike has gained the experience.  He can penetrate into the lane and make plays for the benefit of his teammates and his own game.  He can match the level of play opposing him from other postseason point guard veterans.

In today's NBA, one could argue that the point guard position contains the most overall talent in a given position.  Some pundits will tell you the NBA is now a point guard's league.  Conley is quietly among the best of this group, and although he might not be labeled in that category by the media, it is a safe bet that opposing coaches gameplan for his style of play and ability.  The offseason should have provided ample time for healing of the right hamstring.  We must watch to see if this health issue becomes a lasting concern over the course of the season.

Grizzly Bear Blues' senior staff writer Joe Mullinax emphasized that Conley must take on more offensive and defensive responsibility this season in order to be "elite." It should and will happen this season.  He now has one year of Dave Joerger's style and philosophy under his belt.  He has two years left on his current contract.  The opportunity to shine and solidify his name among the "elite" free agent point guards over the next two years begins this season.

Will the Calathes/Udrih Combo Be an Upgrade Over Jerryd Bayless? 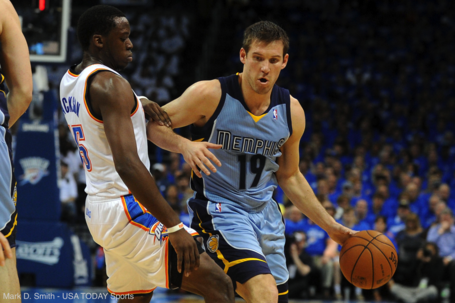 In 31 games before he was traded, Bayless averaged about eight points per game in relief of Conley last season.  Is it fair to expect Calathes and Udrih to combine for a better scoring average than that?  Bayless might have been a decent scorer at point guard, but he was too streaky, especially from three-point land.  With the additions of Vince Carter and Jordan Adams on the wing, coupled with Taysha...ok, fair enough... or maybe Tony Allen (still to be determined...really?)....never mind.  The point is that Calathes and Udrih should not be concerned about taking on the burden of the scoring load, unlike Bayless who seemed to want to showcase his scoring talent more than anything.  Jerryd will be backing up Brandon Knight in Milwaukee next season. The Grizzlies now have two backup point guards who can get the ball to the Grizzlies' beasts in the paint and to our new scorers out on the wing.

The Grizzlies' bread-and-butter lies in the post w/ Z-Bo and Marc Gasol.  Conley is our floor general now, next year, and hopefully for the long haul.  We know what to expect from the backup point guards, and maybe their play will pleasantly surprise us.  Hopefully they know that Tony is defensive-minded...basically, just defensive... right, Tony?