Pondexter's career has been a perfect storm, making it difficult to guess through for next season.

All of the circumstances surrounding Quincy Pondexter have fallen into place just so that nobody really knows what to expect from him next season. He had the early career struggles, one season where he was solid, a blazing hot run through that season's playoffs, then some brief struggles following that which were quickly cut short by a long-term injury. What do you want to believe? Of the Grizzlies' glut of wings, Pondexter might be the hardest to set expectations for.

The consensus label for Pondexter is that he's a three-point specialist, and he shot 39.5% from three in a breakout 2012-13 season. In the 2013 playoffs, Pondexter burst onto the scene in full, especially in the series against the San Antonio Spurs where he made 12-of-25 three-pointers (48.0%) in four games. (Of course, none of us want to remember that series.)

¿Viva España? The Case for Spain in World Cup play

Especially in Memphis, the Spanish national team has earned our support. For everyone else, don't miss the opportunity to appreciate one of the greatest non-U.S. national teams ever assembled.

¿Viva España? The Case for Spain in World Cup play

But that was just one season's worth of three-point shooting – in the two seasons before that year, Pondexter shot 32.5% from three on a significantly reduced rate of attempts. While some guys do make very real improvements in their jumpshot, there are also guys that shoot really well for one season and then regress back to average or worse after that. Without knowing for sure which one Pondexter was, the 2013-14 season was supposed to help us ascertain his growth as a player.

Of course, Pondexter only lasted 15 games last season, logging just 270 minutes of court time. He shot just 32.4% from three, a percentage much more in line with his career norms.

It's funny, because 270 minutes isn't at all enough playing time to make any sort of judgment. Pondexter attempted 34 threes all season long, which is as much as some guys shoot in a month. But if Pondexter had shot closer to his 2013-14 numbers, nobody would really have any reason to question his three-point shot. Young guys make natural developments all the time, and nothing would've seemed amiss if Pondexter had just made a few more threes. But because he made 11-of-34 instead of, say, 14-of-34 (41.2%), 32.4% is the number that gets recorded in his Basketball-Reference page and the question lives on.

What makes Pondexter's 2013-14 performance really interesting is that if we dive deeper, there actually are a few reasons that might have encouraged a low three-point percentage and poor play.

(Literally all of the 2013-14 information comes with the small-sample-size asterisk, but the whole reason we're having this conversation is because of small sample sizes. So don't take anything for granted, but maybe we can shed some light on things.)

First, a quick comparison of Pondexter's shot performance and shot distribution charts from 2012-13 and 2013-14 (shot charts from NBA.com, click to enlarge): 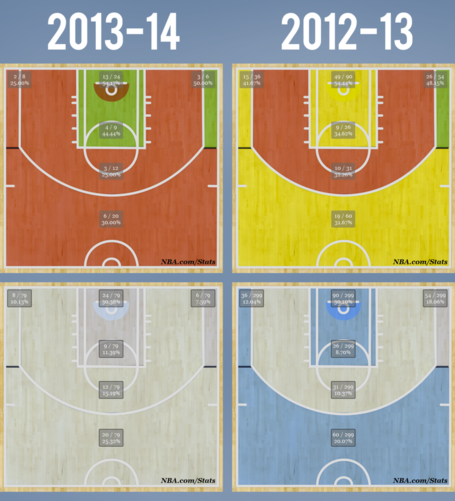 The main thing I want to point out about the shot performance charts is that, if you just look at the percentages, there really isn't a whole lot of difference. The greatest abnormality was that Pondexter shot 2-of-8 from the left corner in 2013-14. Even if you throw out the 2013-14 shot performance chart (dividing up an already small sample is gross), the main takeaway here is that Pondexter is mainly proficient in the corners where shooters get the shortest three point shot, and bad elsewhere.

And that's interesting because of the shot distribution charts. In 2012-13, the corners made up most of Pondexter's three point attempts. He nearly had more from the right corner alone than he did from above the break in the arc. Last season, Pondexter strayed more from the corners for threes above the break. Additionally, his rate of midrange jumpers went up and also surpassed his percentage of shots coming from each individual corner.

A few threes here instead of there might have flipped this whole thing on its head, but this is the hypothesis: Pondexter's offensive role grew too quickly compared to his growth as a player, and he got away from taking the efficient corner threes for shots he couldn't make as efficiently. From there, we can make touchy-feely guesses about how missing shots damaged his confidence and how much his injuries factored in to the equation.

Pondexter was given more responsibilities to be a direct part of the offense instead of living off others and spacing the floor from the corner, and unsurprisingly, that had a negative effect on his production. He straight-up sucked in the 15 games he played. Maybe he would've been better after spending a bit more time in the role (the whole team collectively blew until January anyway), and adding some on-ball stuff to his game would've been worth something too. But he got injured, and instead we're only left with guesswork and maybes built off of feeble numbers.

To be honest, there's nothing above that really comes close to confirming anything for next season. The sample from last season is just too small. But if it points towards anything, here's my guess: Pondexter's 2013-14 struggles had less to do with a regression in his game, and more with how he was used. If that's reassuring in any way, it's that 2012-13 wasn't a flash in the pan. Now it's a matter of continuing to develop further.