What if the Memphis Grizzlies crossover into other professional sports?

It is the off-season...and there is space to kill!

Share All sharing options for: What if the Memphis Grizzlies crossover into other professional sports?

When I was in high school, we had three major sports.  The first and most popular was baseball.  This town was a big Mecca for baseball with a large baseball complex with traveling teams for all ages and the like.  Unfortunately I was terrible at baseball.  Well...let's put that in a more positive light:  I was amazing at striking out, dropping fly balls, and getting hit by pitches.

Basketball was another big-time sport.  However, I was short, slow, and had a vertical leap that barely made it over a phone book.  I had a similar old man/garbage man game like ZBo, except Zach is a good ten inches taller than I am.

What I did participate in was football.  I played on special teams my sophomore year, started at linebacker (where the smart guys play on defense) my junior year, and at guard (where the smart guys play on offense) my senior year.  We were fair-to-middlin' during my time at school, but I ran into the same problem  ran into with other sports.  I was too slow for the little guys and too small for the big guys.

Sometimes I wonder how my life would be different if I had spent my time in another sport.  What if I had practiced my craft in basketball and developed a back court game.  What if I had been born in the Great White North of Canada and picked up hockey, which I have thoroughly enjoyed since I was young. (Of course I cannot skate to save my life. Nature is a cruel mistress.)

Then sometimes my thoughts expand to a larger scale; like what if Micheal Jordan never picked up a basketball? What if Eric Clapton played violin and not guitar? What if Jack Nicholson became a hair stylist  or created hair care products like this guy instead of staring in The Shining?

And that's what I am doing today.

Pretend for a moment that there is no basketball...that Dr. Naismith hit his head on some ice and never puts a peach basket on a backboard.  Where would our beloved Grizzlies have crossed over???

Hockey- Mike would be the prototypical wing player in an up-tempo style offense.  His size (6'1" and 185 lbs. are optimal for a wing) and his ability to slip in and out of a jam would be perfect in the NHL.  Plus, he might be able to recruit his friend from high school to be his own enforcer, like a goofier looking Zdeno Chara.* 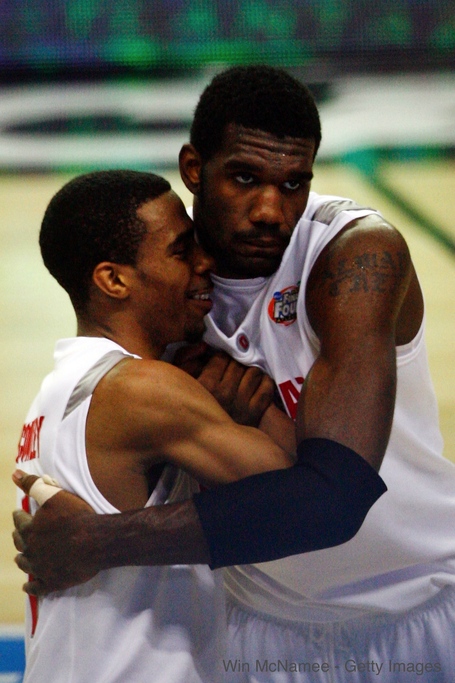 * Do you know how scary it is to google images of Greg Oden?  I'm like Bill Simmons, in that I want to be the last person to have not seen seen Avatar or Greg Oden naked.

For those without hockey knowledge, here is Zdeno Chara...the 6'10" defender for the Boston Bruins...who is the tallest person in NHL history...and he would still have to look up to Greg Oden... 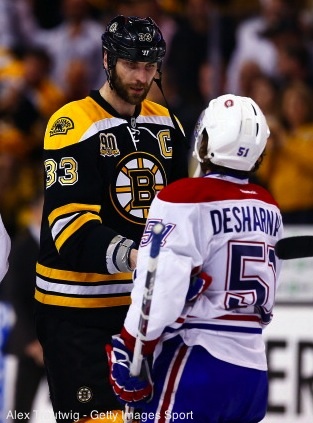 Professional Wrestler- Tony is the man.  Not only could he be the man, but he could beat the man.  He is brash, loud, and confident, with a likeable attitude that fans love.  He could easily slip into a babyface or in a heel's role in the WWE.  Plus, he already has a finishing move.  A little sweet chin music if you please:

Makes me smile every time.

Baseball- Tayshaun is 6'9" with the wingspan of a Pterodactyl. Doug Fister, who is one of the better pitchers in baseball, is 6'8".  Randy Johnson was 6'10" and brought HEAT.  Plus, at this point it is probably better if Tayshaun only has to play every five days...

You hear that Joerger? 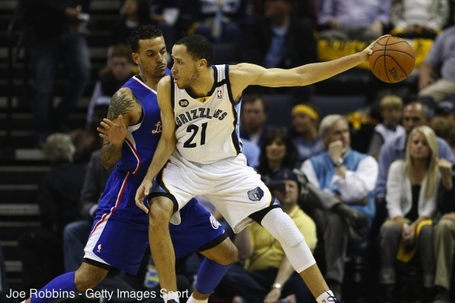 Lumberjack Sports- Marc is already a large stocky fellow who has a pretty solid year-round beard.  Being from Spain, I am not sure how he would deal with the cold climates, but he would look great holding an ax.  I would love to see how he would fair against the Giant Redwood...the Larch...the Fir...the mighty Scot's Pine...the lofty Flowering Cherry...the Leaping Rune of Nigeria...the Flatulent Elm of West Ruslip. 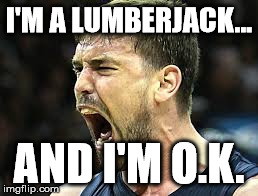 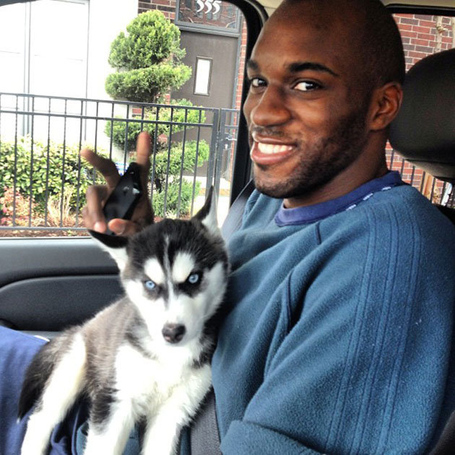 It's a shame that in some countries these dogs are eaten.

Paper, Rock, Scissors- This is kind of an odd choice for such a tall guy, but hear me out.  If you listen to the best PRS players in the world (but why would you ever want to?) they say that every player has a "tell" that gives away what they are going to throw.  Not this guy.  Kosta barely has any expression on his face at all.  My wife remarked one time that it looked like he was made out of wood. 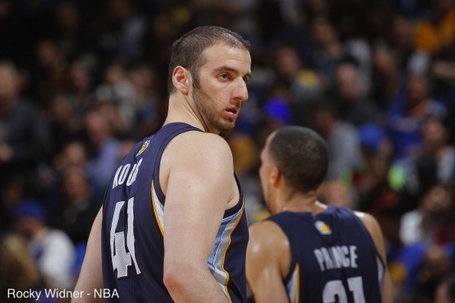 Gymnastics-Not so much now, but at one time Vince Carter had mad hops.  Not only was his game above the rim, it was waaaaaaaaaay above the rim.  It seems logical that he could have translated this: 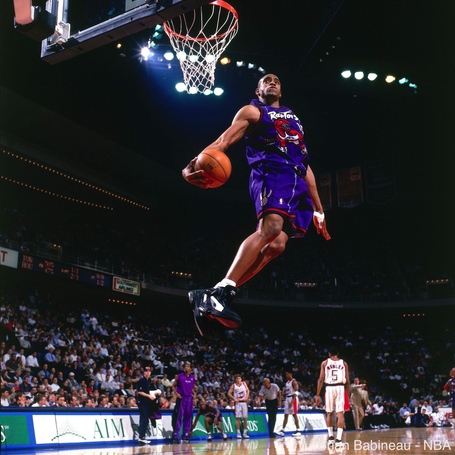 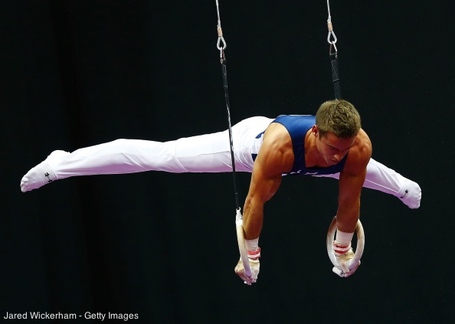 Big Game Hunting- Jon is from Long Lake Minnesota, known for spacious wildlife ranges for hunting, and a large lake for fishing.  Could there be anything better than Jonny Badger taking out a rhinoceros? Or wrestling a grizzly bear?  Putting a bald eagle in a headlock??? Whacking a bass with an oar???

Doing some bow fishing before my next workout pic.twitter.com/rTY3HbUF

Underwater Basket Weaving- hear me out on this one...

Calathes in Greek is a cognate of Calathoi, which means basket.  It appears that our own Nicky Buckets' family, back in old country, was part of a large scale basket cartel.  So basket weaving is in his blood, man.

Would it make you feel better if my original joke was that Nick should have joined cycling where using PEDs is mandatory???

Wait...not that kind of motivational speaker...

More like what Ray Lewis does...or maybe Kurt Russell in Miracle.  Either way...Beno would be a great motivator.  He is like the most positive person on Twitter.  I'm sure there are tons of teams that would love to have him come in and motivate them on a daily basis...and he won't even have to live in a VAN DOWN BY THE RIVER!!!!

Competitive Eating-Might as well use every percentage point of that body fat index clause.  Being that you are associated with Memphis now, may I suggest rib eating.  The world record is only 7.8 pounds in eight minutes set by Tim "Gravy" Brown.  Just to warn you...this video is not pretty:

Wish my nickname was "Gravy"...

Luge-For no other reason than it would be funny watching someone his size slide down a frozen track on their back.  Funny like watching Tim "Gravy" Brown slide down a water slide... 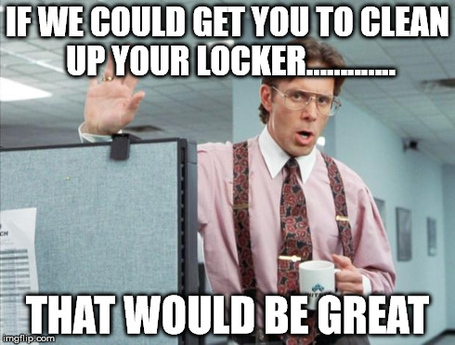