What if the Memphis Grizzlies had never traded Rudy Gay?

With Rudy Gay now on the USA team, some in Grizz Nation are left with thoughts of "What if?" concerning the former Grizzly.

Share All sharing options for: What if the Memphis Grizzlies had never traded Rudy Gay?

Did we end up on the better end of the deal? Would the Grizzlies have won a championship by now had the deal never happened? Would Lionel Hollins still be the head coach? There are even more questions that come to mind, and I'm going to try to tackle a few of them to see if Grizzly Land is better or worse without Rudy Gay. Let's say, just for a moment, that Rudy hadn't been traded. No Tayshaun Prince. No Ed Davis.

Now, let's take a trip to the twilight zone:

The Grizzlies continue flowing smoothly and don't experience a post-trade-bump and make Grizzlies history with a 60 win season. Rudy Gay has his best half of the season in his career and ends up winning the MVP award. He presents the most eloquent speech that is even better than the one Durant has the next year. In fact, he trademarks the phrase "You're the real MVP" when speaking to Lionel Hollins in the audience, to which Lionel Hollins returns with a grin. The first two rounds of the playoffs go nicely with Rudy continuing to be amazing. We crush the Spurs when Rudy Gay hits the Game 7 buzzer beater that looks like this:

...and scores 15 points in the fourth quarter to lead the Grizzlies to their first championship. There's a parade on Beale Street. Rudy Gay is promoted to the Grizzlies' Hall of Fame. He becomes the icon of the city. The next season, The Grizzlies go on another historical run, with Lionel getting along with the front office after signing a new contract. Dave Joerger faithfully remains behind the scenes while conducting Memphis' top-tier defense. But before a game at Golden State in 2014, Robert Pera bursts into pre-game practice and starts barking at Lionel for not liking analytics. The two get into a cat fight, and Lionel starts talking about a champagne taste on a beer budget. Furious, Robert declares Dave Joerger the coach; in turn, Rudy says he quits. Marc Gasol starts trying to calm his teammate in Spanish, but Rudy can't understand a word he's saying. Tony Allen starts to grumble about how he never liked Lionel anyway. Beno Udrih smiles and tells everyone to look at things positively and that everyone can get along. But no one listens. A front office explosion happens and the Grizzlies get obliterated in the Finals due to internal disruption.

Ahem, well that last part wasn't too encouraging. Let's try heading to a galaxy far, far away, and see what we can find there:

The trade rumors are put to rest. Rudy Gay feels as if he can breathe now. Tayshaun Prince gets to stay with his beloved Pistons, but his career is rapidly declining. The city of Detriot becomes a bit angrier in the next year or so. Ed Davis stays up in the North. He keeps complaining about how cold it is. Grizz Nation has to continually endure Rudy's ball hogging tendency in fourth quarter situations. Marc and Zach both become angry that they aren't being relied upon enough. Mike Conley's growth comes to a standstill. Lionel continues to endorse Rudy and tells all the players to let him take over in the fourth quarter situations. Tony protests and says that he should be taking the shots, but Lionel ignores him. Much to Memphians' chagrin, the Grizzlies are bounced in the first round by the Clippers in a Game 7. It was crunch time, and Rudy missed the buzzer beater. Lionel is fired, and Rudy is left to be under the leadership of Dave Joerger. Only, he doesn't get the ball as much as he used to. Mike, Marc, Tony, and Z-Bo thrive, while Rudy falls behind.

Yikes. That was weird. Let's try this one more time:

The 2012-13 year starts off superbly. The Grizzlies are getting recognition, and Lionel Hollins is at the helm. In fact, things seem to be shaping up nicely. Zach Randolph is steady, and Mike Conley thrives. Plus, Rudy Gay also just seems to be getting better. All in Grizz Nation are excited and anticipative. But suddenly, trade rumors arise. Stories float around. Doubt begins to creep in Rudy's mind, as well as Lionel's. But Lionel knows that he is too valued. He had told the front office not to trade Rudy. And no one would ever oppose him, right? Fortunately, the trade deadline comes and goes, with no Rudy Gay replacement. But tales of a piece that was going to be part of this rumored trade arose. It's Tayshaun Prince! He is having the best season since the year he won the championship with the Pistons. He's dunking on people, hitting impossible threes, and just being a flat out beast:

Grizzlies fans begin to wonder: what if they had traded Rudy? Would that have gotten this amazing Prince, this veteran player? But they had Rudy! What else did they need? The Grizzlies eventually advance to the Finals under the leadership of Gasol, Gay, Conley, Randolph, and Allen. But the Detroit Pistons stand in their way of winning the championship. This means they must face Tayshaun Prince, the exact piece that had been on Grizz Nations' wondering minds for months. And to their dismay, the Grizzlies are in fact defeated by the Pistons, with Tayshaun having a tremendous series. Lionel remains the coach, and Rudy remains on the team, but the fans wonder what could have been with the leadership of Prince.

Okay, okay, this scenario might be the most unbelievable of the three. Instead of traveling to more dimensions, I'll give you some facts.

Without Rudy, the Grizzlies won a record 56 games and went to the Western Conference Finals, despite a bump in the road right after the trade. Mike Conley's game has continued to evolve, while Gasol and Randolph represent a solid duo. Tony is still a defensive monster. Even with injuries, the Grizzlies reached 50 wins last season under the rookie coach Dave Joerger, who seems to be on good terms with the Front Office. And Rudy? After being traded from the unsuccessful Raptors, he went to Sacramento, where he missed the playoffs last season. (And, just a note, the Raptors got really good after Rudy left. Coincidence?) Yes, he's on the USA team. However, let's keep in mind who is the real winner here: the Memphis Grizzlies. 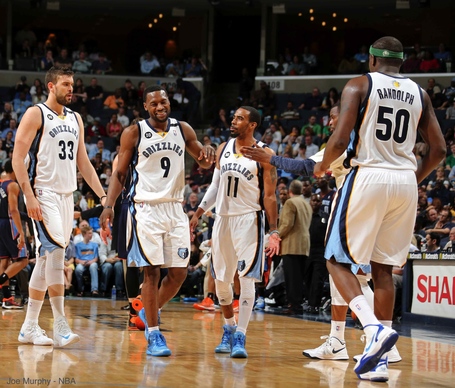