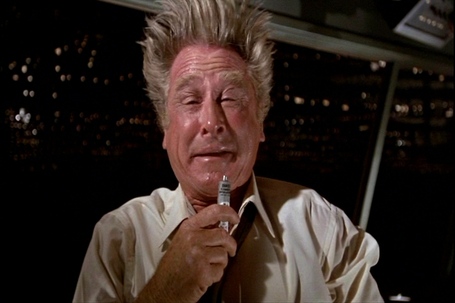 This is your weekly look at what is over/under-rated in Grizz world, the NBA, and the universe in general.

95-On GBB this week, there were two good fan posts about 2014 first round draft pickJordan Adams written by Grace Baker and Jonah Jordan. Both articles focus on the ways Adams can be used in the Grizzlies system to increase offense, especially help with offensive possession and efficiency. Jonah Jordan even compares Adams to Manu Ginobli, which is an exciting thought. Here are some things I do know: he set the single season record for steals last year with ninety-five. He is forty-second overall all in scoring at UCLA, which is not bad for two years. He was also the second fastest player to reach 1000 points in UCLA history. These records mean something, since UCLA is a storied program that knows a thing or two about winning.

However, the first time I see Adams play with the Grizz will be the first time I have seen Adams play. When Adams was drafted, I had a similar reaction to this pick that most Grizz fans had: a mixture of confusion (Who?), longing (They have got to be trading him, right?), and petty annoyance (no Rodney Hood, P.J. Hairston, Shabazz Napier??). However, this pick reeks of John Hollinger's hands all over it, taking an non-athletic player with good efficiency numbers, and in him I trust. I believe with this draft pick this will set the tone for future drafts with this front office group going forward. 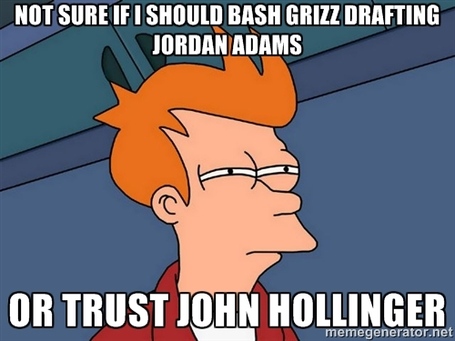 10.8- Additionally, Mark Deeks reported that in Jordan Adams contract he just signed with the Grizz contains a clause that aligns bonus money with his body fat percentage. This seems to be a first of sorts for a rookie contract, with the only example being former New Jersey Nets and Memphis Grizzlies guard Marcus Williams. Upon first hearing this story, this brought back memories of not wanting to pay rookies their full value, like in the case of Xavier Henry and Greivis Vasquez back in 2010. But here's the skinny (get it?). Adams had the third highest body fat percentage of the players in the draft last season at 10.8 percent, trailing behind Nik Stauskas (12.1) and Kyle Anderson (13.4). Additionally, Adams lost twenty one pounds to get to his combine weight of 209 pounds. Plus... MEMPHIS ONLY HAS LIKE THE BEST FOOD IN THE ENTIRE FREAKING WORLD.

(thinks of Gus's Fried Chicken...sighs...wipes drool off the corner of mouth....takes a deep breath)

However, I do think this is a little overblown The guys in the NBA are professional athletes who play basketball all the time and can afford to have personal trainers, nutrition consultants and such. Plus, because the rookie scale is so low, it is a constant motivation for rookies to keep working and grinding for the next contract, when the money is good. So after that second paycheck, go on and get fat.

The haul Minnesota got for Kevin Love. Of course, nothing is official and the trade can not be completed until August 23. However, this was the best of all situations for Minnesota. They made a mistake and did not give K-Love the extra year, which would have put him in the most lucrative class of free agents in a while for 2016. They have made some questionable salary decisions that have cost them the time they did have with Kevin Love (10 million dollars for Kevin Martin?). They swapped coaches with Houston, who sucked at the time, and both teams continued to underachieve, Minnesota more so than Houston.

But getting Wiggins, Bennett, and a first rounder next season is falling up in this author's opinion. Even if Bennett gets traded to Philadelphia for Thaddeous Young, the grouping of two number one over all picks is unprecedented in NBA history. Wiggins becomes the sixth player in NBA history to be taken number one overall and not playing for the team that drafted them:

That is rarefied company. What is even rarer is finding a trade involving two number one overall picks. In NBA history, no team has ever traded for two top picks. As a matter of fact, I could only find a few trades that involved two first overall picks.

The Original Kevin Love Trade- Memphis is a trend setter. We were trading Kevin Love before it was cool. But with all this Kevin Love news around it was a good time to reflect on the three or four hours Kevin Love was a Memphis Grizzly. Joe Mullinax did a fantastic job revisiting the trade here, hypothesizing that Love's presence may have put the Grizzlies in the NBA Finals in 2013 (I agree with him in this article 100% that Love replacing Randolph is both good and bad...but would make this team most assuredly better). Managing editor Chris Faulkner revisited a post from a year ago, completely reworking the history of the Grizzlies since the 2008 draft. I want to take a bit of a different angle. Knowing what we know today, what would a re-draft of 2008 look like? Here is my top five:

Agree or disagree?? See the poll at the bottom.

SO were we any better off. Ok...so we got nothing in the Kevin Love deal other than OJ Mayo and OJ walked for nothing. Gordon has been a bit of a malcontent (but who wouldn't be being a Clipper). Gordon was also the feature piece in the fraudulent Chris Paul trade out of New Orleans. I am not sure if the Grizz hold on to Gordon either, but he could have been used in a trade of some sorts I think. Just thinking about the old days of the franchise sometimes makes me depressed.

I remember watching the draft back in 2008 and feeling very upbeat about the Kevin Love selection. I was also a fan of the trade, because I though Mayo was under-rated, even at pick # 3. Looking back makes me wonder though if this Grizzlies team would have been going through the same thing with Kevin Love. When Lebron knocks, you answer. But then again, this might be a short rebuild with some outstanding young talent. Did you know no player has ever been traded for two number one picks before??? You heard that one already???

Life, The Universe, and Everything Else O/U

Dan Lebatard being suspended by ESPN- I love his show on ESPN, Highly Questionable, mostly because I am a big fan of Bomani Jones and who doesn't love Papi. I also have started listening to the podcast of his show from Miami since the whole Lebron free agency thing this summer. On his show on Wednesday, he announced that he had paid for six bilborads in Akron, Ohio that read:

Since then, he has been suspended by ESPN for these actions. Generally, I think that people involved at ESPN are humorless and looooooove suspending people. I know the guys here at GBB are not humorless, but since I have just started to write here occasionally, I wanted to clear up what can and can't be put on a billboard without being suspended. How about:

I'm just asking...for a friend. Actually...I may do the last one myself.

Writing a weekly column when there are no games- Write for a blog they said. It will be fun they said.

I just wrote like 1500 words on a chubby shooting guard and a trade that happened six years ago. Apparently this was the wrong time to stop sniffing glue.