The United States held Finland without a second quarter field goal in the dominating win.

Share All sharing options for: USA Cruises To 114-55 Blowout Victory Over Finland In World Cup Opener 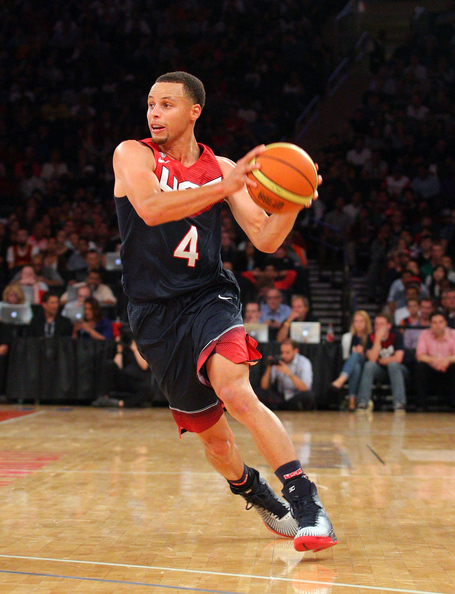 With the United States sending a weakened squad to Spain, there are teams in the FIBA World Cup that can pose a true threat to the USA's gold medal hopes. Finland is not one of those teams.

The Americans crushed the Finns by an astounding 59 points, 114-55 in their opening group stage game of the FIBA World Cup.

Finland scored the first two points of the game, but it was all downhill from there as the Americans dominated both sides of the ball throughout the contest. The USA held a 31-16 lead at the end of the first quarter, and then out-scored Finland 29-2 (not a typo) in the second frame. The Finns were held to zero field goals (also not a typo) in the quarter as the USA held a massive 60-18 advantage at the halftime break.

Finland showed signs of life near the start of the third with a brief 7-0 run, and Petteri Koponen began to heat up from behind the arc to lead the Finns to their best quarter of the game, although the United States still won it 29-21. The USA then closed the game with a 25-16 fourth quarter.

With the massive scoring differential between the two teams, it should be no surprise that the United States had a surplus of highlights throughout the contest, notably these two huge slams from Rudy Gay and Derrick Rose.

Golden State's Klay Thompson was the United States' leading scorer, dropping in 18 points on 7/10 shooting from the field. Anthony Davis added 17 points and four rebounds, while Derrick Rose and Rudy Gay rounded out the USA's double digit scorers with 12 and 10 points, respectively. Petteri Koponen and Shawn Huff led Finland with 12 points each.

The USA continues group play Sunday afternoon, in a 2:30 tilt against Turkey.