Mike Conley and Courtney Lee both played valuable roles in the Grizzlies offense from behind the arc last season.

The Grizzlies aren't exactly known for their shooting. After all, we are talking about the team that got swept out of the 2013 Western Conference Finals in part because the Spurs were willing to sit in the paint and watch Memphis brick jumpers all series long. The current Grizzlies roster has more shooting than that one did, but barring some kind of unexpected radical change in the team's offensive philosophy Memphis will still probably finish near the bottom of the league in three-point attempts.

Most Grizzlies players aren't lighting it up from beyond the arc, but they still have to get their points from somewhere. This is the start of a series to look at not only where Grizzlies players shoot from, but also how efficient they are from the five major shooting zones. First up is the guards. 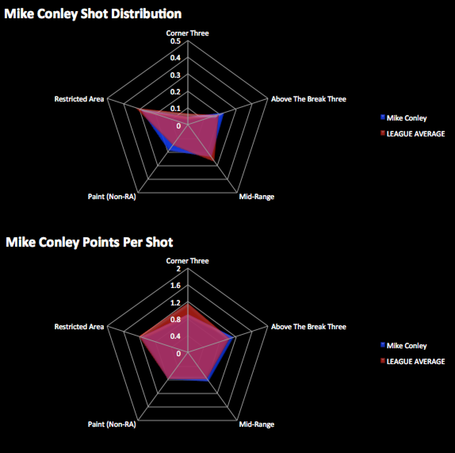 Before I break down Conley's charts I'm going to explain what this is in case you're not quite sure what you're looking at. The chart on the top takes Conley's shot distribution in the five major shooting zones as a percentage of his total shots and graphs it alongside the league average. The bottom chart does the same but with points per shot instead of shot distribution. Paired together the charts can reveal some interesting trends in a player's shot selection. All data used comes from the 2013-14 regular season.

So looking at the data for Conley, we see that he's a really smart player in terms of picking his spots. From downtown he's very good above the break but not so much from the corners, and his shot distribution reflects that he knows this and looks for the above the break threes much more often. He's also above the league average in efficiency on mid-range shots, but he takes less shots from that area than you might expect him to. This isn't necessarily a bad thing. He is an above-average mid-range shooter, but he's still getting fewer points per shot on those looks than above the break or in the restricted area, so it's actually smarter to look for those shots first.

If there is one gripe with Conley's shot selection it's that he takes too many shots in the paint outside the charge circle. He's actually very slightly above league average for points per shot on those looks but it's a situation similar to the mid-range shots where it's simply just not a very efficient shot. The average points per shot on mid-range looks is 0.789 and the average for non-restricted area paint shots is 0.786, compared to the three other zones which are all well over one point per attempt. Conley probably takes a lot of these long paint shots because of those floaters he likes so much, and while that's a terrific shot for him to have in his arsenal, he's better off going all the way to the rack when the situation allows it. 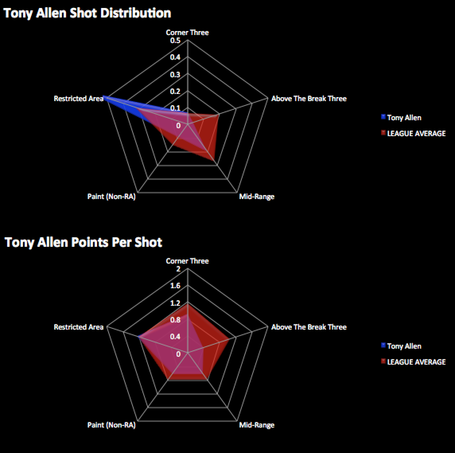 Offensively Tony Allen pretty much knows what he is, which is a good thing. He takes an overwhelming 61 percent of his shots right at the rim. His points per shot from that spot isn't anything all that special, but he has limited tools to work with and his efficiency from the other spots on the floor is far worse than the average. So unless Allen enters the eleventh season of his career with some magical newfound jump shot, he'll almost definitely continue taking the same shots as last season. The results are not ideal, but they're hard to complain about given everything he does defensively. 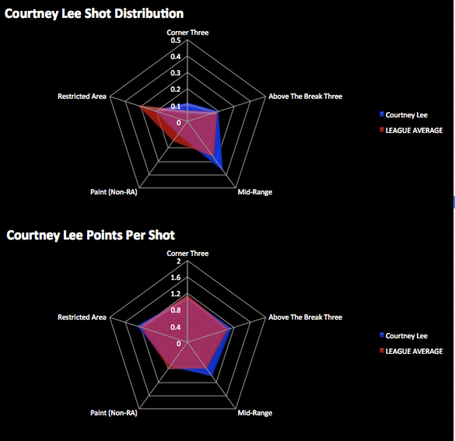 Courtney Lee's chart is one of the more fascinating ones on the team. Lee was one of the best mid-range shooters in the entire league last season, draining just under 51 percent of his 227 attempts. Considering his success at the in-between game it's no surprise that he took more shots there than anywhere else, but while he's far better than league average in that area he's still getting more bang for buck from the restricted area and both three-point shots. Now it would be foolish for Lee to abandon the mid-range game altogether, but it would be beneficial for him to take a few of those attempts and either back them up a few feet or take them to the hole if possible.

It's also important to note Lee's reluctance to attack the basket. He's known for being a shooter, but he was terrific in the restricted area last season, shooting 65 percent. Despite the high conversion rate, Lee took only 22 percent of his shot attempts at the rim last season, while the league-average player attempted 32 percent. 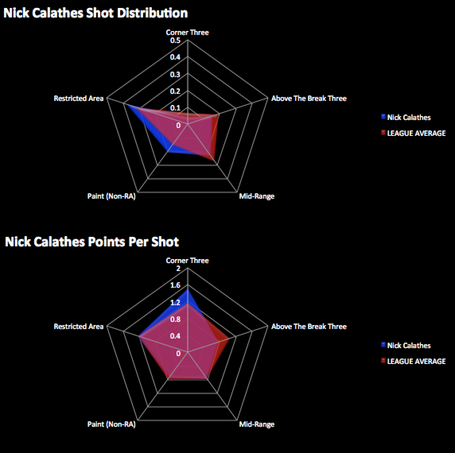 Don't get too excited about that corner three-pointer — Calathes attempted just 14 over the course of the season. Other than that, nothing on this chart is particularly surprising. He's maybe taking a bit too many above the break threes, but that kind of feels like nitpicking. For the most part he's making do with what he's got by taking the majority of his shots in the paint, and that's perfectly fine. 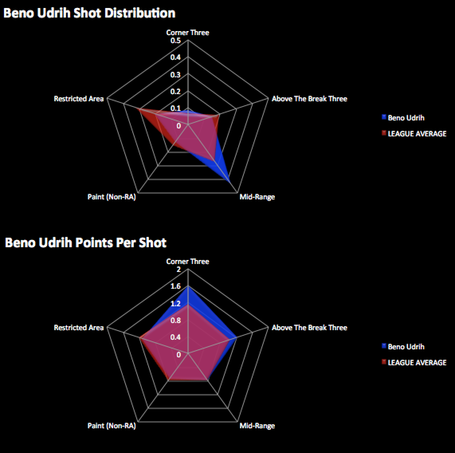 Beno takes A LOT of mid-range jump shots. Far too many of them, and that's sadly not a result of the small sample size. In fact, he actually took more of the long twos the year prior — they comprised 48.53 percent of his shots in 2012-13 compared to 43.26 percent last season. Like Calathes, what is a result of the small sample size is the absurd corner three percentage. Beno attempted only 15 threes from the corner last year. But unlike Calathes, Beno actually is a good shooter from that spot, just not as good as the small sample size makes him out to be. To maximize efficiency Beno should trade in a good amount of those mid-range looks for three-pointers or layups, but he's been in the league for 10 years and has pretty much always had a distribution similar to this one, so it's unlikely to change. 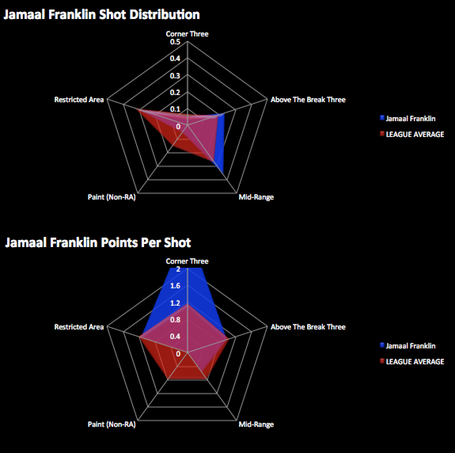 This is pretty much useless. Franklin's minutes were almost exclusively limited to garbage time, and he only took 39 shots the entire season. With such a small sample size it's impossible to reasonably infer anything about his shot selection or his efficiency. He shot a perfect two-for-two on corner threes, so that's something notable, I guess.

1. [Stats from time with Knicks and Grizzlies]↩