There has been a lot of discussion about former Grizzlies draft pick Kevin Love over the past few weeks. Off and on through the years, however, there has been a conversation among Grizzlies fans about what if Memphis had never traded Love for O.J. Mayo. What would Memphis be like with a Kevin Love on the roster? Better...and worse.

Share All sharing options for: For Love & Memphis: Is Kevin "Better" Than Z-Bo?

It's hard not to think about the NBA in the past month or so and not have Love on the brain...

Of course, not THAT kind of love. Whether it be in ongoing trade discussions with teams and the now very possible and eventual move to Cleveland or his decision to not play for the United States in the FIBA World Cup because of his up-in-the-air NBA future, Kevin Love has been a major topic of off-season conversation. Is he worth the cost of Andrew Wiggins? Was he right to drop out of Team USA consideration? How much can Flip Saunders and the Minnesota Timberwolves actually get for the ultra-talented but still unproven-as-a-winner Love?

Meanwhile, Grizzlies fans across the Mid-South and beyond are all welcoming the rest of the country to the speculation party. Memphis had the original rights to Kevin Love, as was discussed in this piece by our very own Managing Editor Chris Faulkner almost a year ago. As the draft concluded the deal was done, and Love was shipped to Minnesota along with Mike Miller, Brian Cardinal and Jason Collins for Antoine Walker, Marko Jaric, and Greg Buckner. So many opportunities for "what ifs" and "if onlys", so few Antoine Walker highlights.

Chris did a great job plotting hypothetical situations if Love had remained in Memphis, including possibly having a Mike Conley/James Harden/Paul George/Kevin Love/Marc Gasol starting five (!!!!!!!). The addition of a Kevin Love to any Memphis roster, however, means never having the addition of a Zach Randolph. This is the biggest piece to this discussion of keeping or letting go of Love in Memphis; so much of the Memphis Grizzlies, as fans know and love them, is driven by what Z-Bo brings to the table. Would the Grizzlies really be that much better with Kevin Love, and without Zach?

The answer, as with most things in life, lies somewhere in between.

Kevin Love is at worst one of the top 12-15 players in the NBA at this point in his career, which is backed up by his two 2nd-Team All-NBA Teams in the past three seasons including one season in which injury stopped him from achieving a 3rd. He averaged 26.1 points and 12.5 rebounds per game along with 4.4 assists last season on 46% shooting overall, 37% from beyond the arc and 82% at the charity stripe. Pick a shot chart, any shot chart- 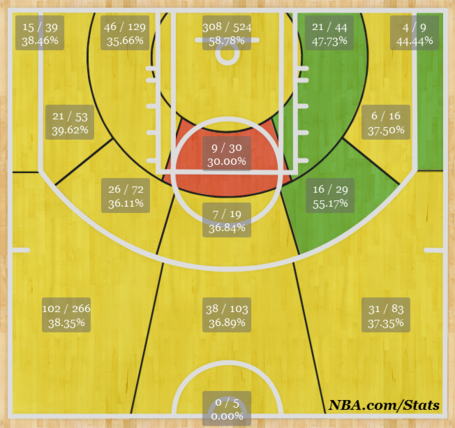 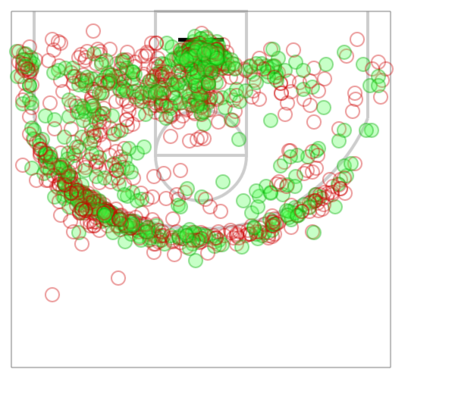 Any color, any shape, the charts state the obvious: Kevin Love can score the basketball at an elite level.

His advanced statistics also suggest that Love is a truly dominant and generational talent. An offensive efficiency rating of 120 (Kevin Durant's was 123 for comparison's sake, Zach Randolph's 105), a PER of 27 (LeBron James' was 29.4, Zach Randolph's 18.4), and win shares numbers of 14.3 compared with Z-Bo's 6.4 all point to the fact that Kevin Love is a superior basketball player to Zach Randolph, and it isn't very close.

He was even capable of making the hated Clippers and Blake Griffin look silly to the tune of 45 points and 19 rebounds this past season.

Is he worth Andrew Wiggins? The better question may be, is Wiggins and whatever package Cleveland can offer enough? Kevin Love is a top NBA player right now and would be a huge piece to a Memphis Grizzlies' title opportunity if he were still in the Bluff City. In fact, this tweet from Matt Moore of CBSSports.com that partially inspired this article...

Wonder what would have happened if the Grizzlies-Wolves Love-Mayo trade never happened.

in turn inspired this response from yours truly (a manual retweet, no less!)

An NBA Finals appearance in 2013 RT @HPbasketball: Wonder what would have happened if the Grizzlies-Wolves Love-Mayo trade never happened.

Can you imagine a healthy Kevin Love on that 2012-2013 Grizzlies team? The scoring, the spacing, the ability to allow his teammates to attack the rim through the lane while being able to knock down mid-range and three point shots at 6'10" tall? The pairing with Marc Gasol! Taking turns in high-low sets, Marc creating and facilitating for Love all over the court and in the post. It would be beautiful, and would likely mean a much more competitive series, and possible win, against the Spurs. From there, all bets are off against the Miami Heat in the NBA Finals.

As a basketball player, Kevin Love would be an upgrade over Zach Randolph. That would make the Grizzlies better for sure...right?

Remember that Clippers highlight from above? Kevin Love, 45 points, 19 rebounds, a dominant performance...in a losing effort. The Clippers won that game, 120-116 in overtime. Love made the only shot he took in the overtime period; he was 1-1. In fact, in the 5 games this past season in which Kevin Love scored 40 or more points, the Minnesota Timberwolves were 1-4. Over 200 points scored in 5 games, and for what? One. Measly. Win.

Basketball is a team sport, but in basketball more-so than in sports like football or baseball, one truly great player can lead a team to a great season. LeBron James in Cleveland on his way to his first NBA Finals is a great example; when you look at the personnel that surrounded James on that playoff run, it makes LeBron's eventual "Decision" to head to Miami a little more understandable. Love, despite all his skill and all his numbers, has yet to play a postseason game. There has to be something to that...right?

Is that entirely his fault? No; despite LeBron's best efforts, he has lost to the NBA's best example of "team" in the San Antonio Spurs more than he has won in the Finals. The Western Conference is superior to the Eastern Conference and Love is yet to have been surrounded by a cast of players who are either capable of staying healthy or are good enough to compete consistently out West (Ricky Rubio's max-contract request aside).

They are, however, better than the crew that surrounded LeBron during his first Cleveland run. Kevin Love is a gifted athlete, but he is not LeBron James. He cannot do it alone, and when he tries it can take away from others. Perhaps he is a better 2nd fiddle to King James than he is a superstar leader, as he would be in Memphis.

Meanwhile, Zach Randolph has adapted his game as the years have gone on to be able to better serve those around him. Z-Bo saw his role in Memphis fluctuate for injury reasons last season, but prior to that he was seeing lower usage rates offensively than he had seen since his first two seasons in the NBA from 2001-2003. The desire to push Rudy Gay to the forefront of the offense, and the growing roles of Mike Conley and Marc Gasol upon his departure from the Bluff City, led to less offense designed specifically for Z-Bo.

While Zach is a player who likes to have the ball in his hands, it appeared that he was OK with this development. He had found a home in Memphis, a community that embraced him and loved him for who he was: a bully on the block, a fighting post presence who had to work for what he got on the floor and in life. Z-Bo, as he has aged, has inched closer to becoming something in Memphis that Larry Bird is in Boston, or Magic Johnson is in Los Angeles; an icon.

It is not just because of basketball ability, it is because of him doing things like this...

And giving back to the Memphis community in a variety of ways, whether it be school supplies, air conditioning bills, or helping Memphis animals.

Z-Bo fits Memphis like a glove. It is his home, and despite his regressing skill set he fits this team like a glove as well. Could the same be said for Kevin Love? Is it possible that Kevin Love would inhibit the growth of a Mike Conley or a Marc Gasol where Zach changed himself to allow them to shine more? Would a Grizzlies team led by Love have the mental toughness to endure what the Grizzlies have gone through the past few seasons, the times of turmoil and injury, of uncertainty and adversity?

Would Love, if he had stayed in Memphis, be as committed to the community as Zach Randolph? Of course the NBA is about winning basketball games and championships, but only one team can achieve that goal every season. In the absence of a championship, is it better to have a champion of a community over a stat sheet stuffer? That is not to say that Love would not help to make Memphis better; it is more of a statement of the level of love and passion that exists between player, team, and city in Memphis between Zach Randolph and the Grizzlies.

For Better and Worse

Kevin Love is a phenomenal basketball player. In a vacuum, he is head and shoulders above Zach Randolph, and if he was still on the Grizzlies instead of being traded for O.J. Mayo, Memphis may well have already had their parade on Beale Street celebrating a championship. He is better than Zach at his own game of rebounding and brings so much more to the offensive end of the floor than Zach can ever hope to. Defensively, they are similarly skilled, and with the proper supporting cast in Memphis, Kevin Love could very well flourish as the best player on a good roster.

On the other hand, basketball is not played in a vacuum. Zach Randolph's relationship with Memphis and the Grizzlies is symbiotic; a partnership, a marriage, a commitment of bettering both the man and the metropolitan area through an NBA team. That connection is rare and should not be undervalued. Kevin Love could fill that void, but it is hard to see him doing so in the way Zach Randolph has. Memphis, like San Antonio, is that team model, fitting puzzle pieces together and around a few good-to-great players, trying to catch the lightning that is a small-market championship in a bottle while bettering the people and the community in the process.

Maybe it is better this way. Kevin Love will likely get traded to Cleveland, and will almost certainly make that postseason debut alongside King James next season. Memphis, while not having the easier pathway through the East that Cleveland will likely have, is still a damn good basketball team that will compete at a high level when healthy. And they will do so with an entire city behind them, with a rare passion, energy, and love that did not exist before Zach Randolph arrived in the Mid-South.

Sometimes in order to find love, you have to move on from Love first.