The Memphis Grizzlies, a Team Lost in Time

The NBA once celebrated defense and hard work, but now it seems to be a thing of the past. When did the fans of basketball begin to think the game was all about iso-ball and highlights and not about teamwork and sacrifice? The Memphis Grizzlies play the game the right way, too bad they're a few decades too late.

Share All sharing options for: The Memphis Grizzlies, a Team Lost in Time

Like Scott Bakula in Quantum Leap, or Jerry O'connell in Sliders,the Memphis Grizzlies are lost in time, but unlike our two unfortunate heroes, the Grizzlies will never make the leap home. 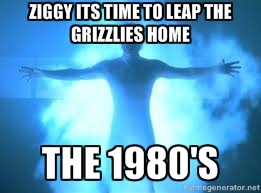 The Memphis Grizzlies brandish a style of basketball that leaves opponents bruised up and their coaches scratching their heads. In an age of places known as "Lob City" or guard duo's known as the "Splash Brothers", the Grizzlies seem out of place.

The NBA is enjoying some of its most profitable years in recent memory, with humongous contracts for television deals and even the most undeserving players demanding top dollar. Offense is at an all time premium with players such as Carmelo Anthony, Kevin Durant, and James Harden. The league and their fans celebrate crazy crossovers, jaw dropping dunks, and endless three pointers, but where is the love for real basketball? 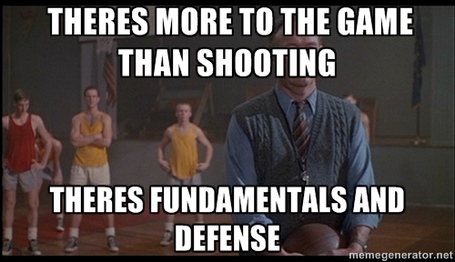 You see, even Coach Norman Dale gets it. The NBA decided years ago that if it was going to be a mainstream sport that it had to keep the masses entertained, and what better way to do that than by handcuffing defenses. Many might say the culprit was the rise of Michael Jordan; his style of basketball transcended sports in such a fashion that the NBA did everything in its power to pave the way for his game to succeed.

From 1990 to 1999 the NBA instituted new rules to "help" the flow of the game on offense and to keep defenses from being too "physical". Among these new rules were a few of the most notorious reasons why defense is almost non existent in today game.

The Hand Check used to be a defenders greatest weapon, allowing him to steer his opponent away from the basket. The hand check is a staple amongst streetball players, try going out to the court and calling this foul and you might get laughed off the blacktop, or even worse your ankles might get broken. However in 1994 the hand check was deemed a foul, and defenders began using their forearms, but sadly that was taken away in 1997.

Doc Rivers, a great defender in his day, quit playing the game of basketball because of all of the rule changes. Doc Rivers was quoted as saying "The first year, they took my hand check away," Rivers recalled. "The next year, they took our forearm away. And then, I retired. I was done. I was like, 'I've got to move my feet? I quit. This is no fun anymore.'"

And he was absolutely right, and it's obvious that its not fun for anyone else anymore judging by the way players play defense now a days. Most of the league could care less about getting a stop, or shutting down their opponent, players don't make money or gather fans like that. 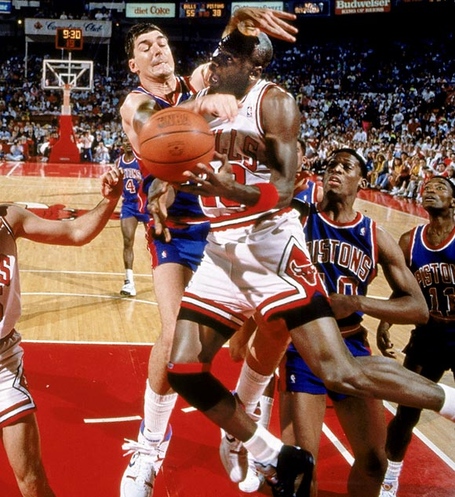 The 1980's era of basketball has been heralded as the "Golden Age" of the NBA, but it's also been called the toughest. There was nothing easy back in those days; you either fought and took the hits, or you lost your job.The Detroit Pistons, aka the Bad Boys were the definition of tough and were a team through and through, but with today's new rules and style, they would have never of gotten the chance to shine. Even the superstars of that age were built differently. Larry Bird, Magic Johnson, Dominique Wilkins and many more were just as tough as they were great.

It was a decade of making the right plays, and the smart passes, because if you didn't you had no chance at winning, or staying on the floor. The modern game is full of players who only look out for themselves, players who no longer have to rely on others to be successful, because the game has changed so much that teamwork is no longer a prerequisite to have a career.

People have said that the rules have made it hard to play defense, that the rules instituted have brought on a more free flowing offense to the league; this is true and false. Yes players now have more freedom to drive the lanes and come off of screens, allowing more individual success, however scoring was never at loss in the 80's, showcasing individual talents were.

The hand checking rules, the no forearms, and other rules instituted to "help" offense, didn't help the game of basketball, it killed teamwork, and birthed the age of individualism in the sport. The game no longer depends on making the right pass, having proper spacing, and taking smart shots. The game now makes it's money on flash, and selfishness.

Which is exactly why the Memphis Grizzlies don't belong here. Anyone who has seen their style clearly knows what I mean. The Grizzlies are a team built on toughness, on making the smart play, on grit and grind. Out of all of the teams currently constructed there are maybe a few that could actually last in the true decade of Golden age basketball, The Spurs, any team with Lebron James, and your Memphis Grizzlies. 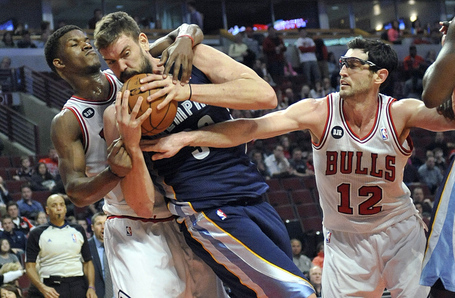 The Memphis Grizzlies are the embodiment to what basketball should be; they do everything the right way. Unfortunately for them the fans don't want the right way, they want high flying speed. The Grizzlies never draw a huge audience for their national regular season games, causing them to lose their spot to more undeserving teams. And who can blame the average fan, yea on paper or at first glance the Grizzlies aren't the prettiest team, but if you look closer you might just see their beauty.

You will never hear the casual fan talking up the Grizzlies, but you can't get NBA legends and analysts to stop talking about them. Whether its Bill Simmons or Charles Barkley, come playoff time everyone thinks that Memphis is the toughest out.  Just look at this random video of Bil Simmons at a book signing, he feel compelled to take a picture of Grizzlies fans, because it's so rare to see us outside of our normal habitat. 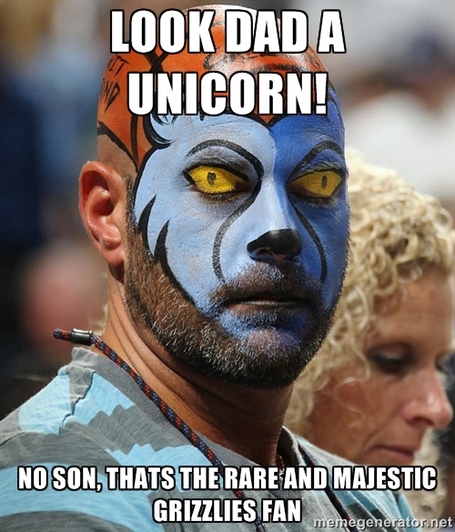 Whether its making the right pass, or a player sacrificing their spot on the floor to help get a win, the Memphis Grizzlies give everything they have every night to the game of basketball. In this day and age that's something that fans should be proud of, but on most nights ESPN "forgets" to air the Grizzlies game, and most fans never get to see what real basketball looks like.

So yes, the Grizzlies are stuck in time trying to resurrect basketball, but with the way things are going there's a better chance of Doc Brown and Marty Mcfly rolling up in the Delorean to gun it to 88mph and take them back to where they belong, back to where real basketball is played.