The shot charts were... not kind to Tayshaun Prince

Share All sharing options for: Pentagonal Shot Charts for the Memphis Grizzlies Wings

On Monday I took a look at the Grizzlies guards using pentagonal shot charts to see where they shoot from, how well they're shooting from those areas, and to judge each player's overall shot selection. Today I'm doing the same for the team's wing players. The results are... well, let's just say that if you find joy in Tayshaun Prince's misery you've come to the right place. 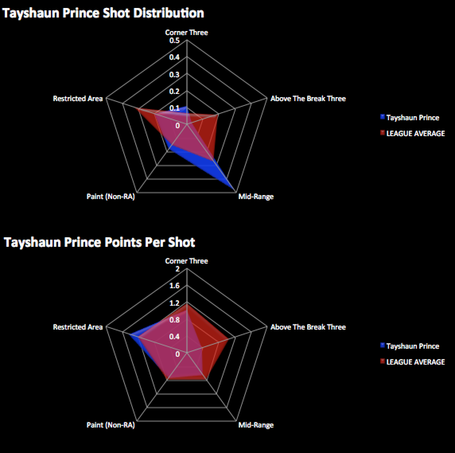 I'm fairly certain this shot chart is illegal in several states, and it probably should be in all of them. I would joke that this chart warrants a not safe for work tag, but the reality is that this chart isn't safe for anybody anywhere. THIS IS BAD, MAN. REALLY, REALLY BAD.

Nearly half of Tayshaun's field goal attempts from last season were mid-range jump shots. That in and of itself is bad for a multitude of reasons, but to make things even worse he is really awful at mid-range jump shots. Last season Tayshaun got 0.65 points per shot on mid-range field goal attempts. I'm fairly certain that Tony Wroten was more efficient on half-court shots (that's only kind of a joke and there's a non-zero percent chance it's factual. He made a few of them!).

Literally Prince's only redeeming quality is that he was actually one of the league's better finishers at the rim, shooting 72 percent from inside the restricted area, so naturally he avoided those looks like the plague. Prince shot about 20 percent of his attempts in the charge circle compared to the league average of 32 percent. Instead, he elected to chuck bricks from mid-range or take an unusually high number of inefficient paint shots outside the restricted area.

With shot selection like this Prince does way more harm than good offensively at the small forward position. His only bright spot is that he was really solid in the paint, so perhaps he could be used as an effective power forward in smaller lineups. It's at least worth a shot. 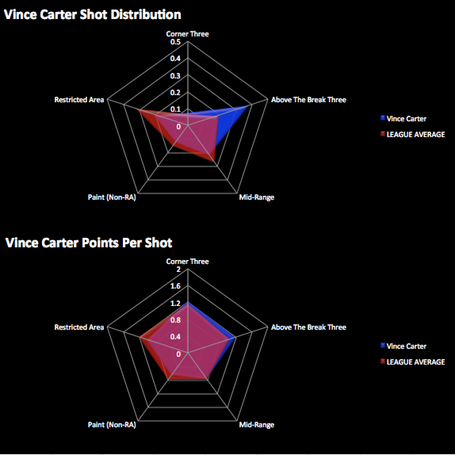 All right, now this chart is a bit easier on the eyes than the previous one. Based on Vince Carter's points per shot from each zone, he actually has ideal shot selection, which really shouldn't be particularly surprising for a long-time veteran who has had to adapt his game so much over the years. He takes almost 40 percent of his shots as above the break threes, and gets almost 1.2 points per attempt from that area, which is outstanding. He's also very effective from the corners, and tends to stay away from mid-range looks and non-restricted area paint shots.

If you want to find one thing to complain about it's that he's not as great of a rim finisher as one might like, but he avoids those shots much more than the league-average player. Last season Carter wanted to shoot the three-ball whenever possible, and it's tough to argue with the results. 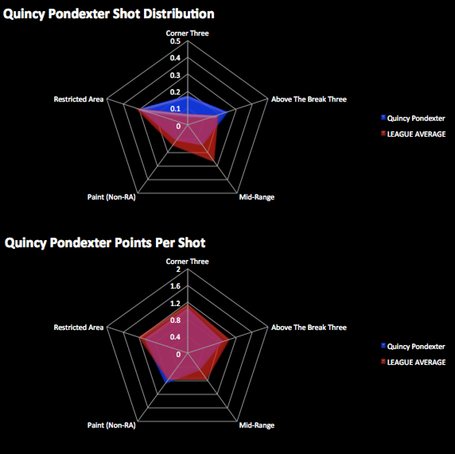 Quincy Pondexter's season was cut short by a foot injury, so we've got a pretty small sample size to work with. Pondexter had only 79 field goal attempts, but for the most part the shot distribution was similar to what we're used to seeing from him. He still camped out in the corners, and while his percentage from that area was way down from his 2012-13 campaign, it was likely a result of the small sample size as he only had 14 attempts before the injury. Pondexter also attempted much more of his threes above the break compared to the previous season, but again it's hard to tell if that's the result of him adapting his play style or if it's simply a trend over a few games that would've corrected itself over the course of a full season.