Pentagonal Shot Charts for Marc Gasol and the Grizzlies Bigs

Marc Gasol's mid-range jumper has become a staple of the Memphis offense, but is it being relied upon too often?

Share All sharing options for: Pentagonal Shot Charts for Marc Gasol and the Grizzlies Bigs

After looking at pentagonal shot charts for the guards and the wings earlier in the week, we wrap up this series by breaking down the shot selection of Marc Gasol, Zach Randolph and the rest of the team's returning big men. 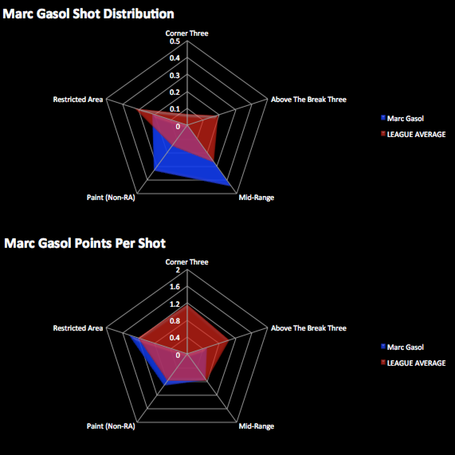 This chart was surprising and raises some legitimate questions. Does Marc Gasol shoot too many mid-range jumpers? That's certainly what the numbers say, at least last season. For the last two years or so I've thought of Gasol's free throw line jumper as automatic, but last season he was actually slightly less efficient than the league-average player on mid-range opportunities. That's a little concerning, especially since more than 40 percent of Gasol's field goal attempts come from that area. I thought this might have simply been a single season slump, so I looked at his NBA.com shot charts from every season in his career. In 2013-14 he shot a disappointing 37.38 percent between the paint and the arc. The season before he shot an incredible 47.69 percent. In the seasons before that the percentages were 38.46, 38.73, 39.22 and 38.14.

There is an unfortunately strong chance that Gasol's 2012-13 campaign could have been an anomaly. If that's ultimately the case then his mid-range attempts need to come down. Over the last five seasons Gasol's attempts from that zone have risen every year, comprising 16 percent of his total field goal attempts in 2009-10 and all the way up to 44 percent last season. Even if they're not falling at the rate they were two seasons ago, Gasol's jumpers still have a valuable role in the offense due to the spacing they provide for Zach Randolph to work down low and for Tony Allen and the rest of the guards to make cuts at the rim, but unless he's going to start shooting a higher percentage then a decrease in attempts could serve him well. 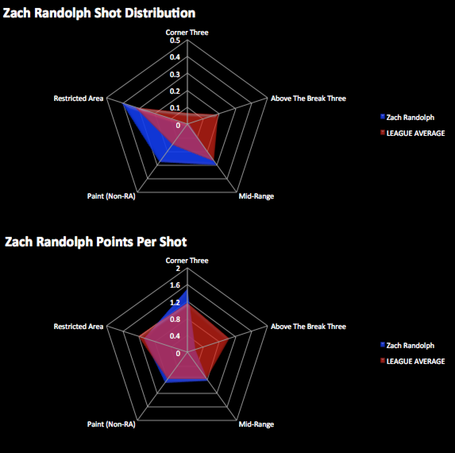 Z-Bo's shot selection consists of a pretty healthy mixture of shots right at the bucket, longer paint looks (likely the result of a lot of his post moves), and two-point jump shots. The shot distribution looks probably about like what you'd want it to. What is a little surprising is his efficiency inside the restricted area, where he fails to reach the league average points per shot. Randolph shot only 54 percent from that area, and that percentage has dropped each of the last three seasons.

It's definitely a little bizarre, and I really have no idea what the explanation for that could be. It shouldn't be a spacing issue, because with Mike Miller and Courtney Lee logging more than 20 minutes each night the Grizz's spacing should have been its best in several seasons last year. Regardless of the reasoning, his inside struggles are no cause for a change in shot selection, but it's certainly something to keep an eye on in the coming season. And regarding the corner threes, he shot two all season and made one, so that's probably not some kind of secret weapon waiting to be unleashed 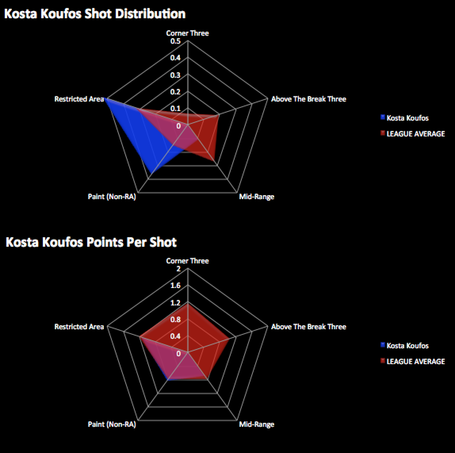 There's not much to be surprised about with Kosta Koufos' chart. Nearly all his attempts come from inside the paint, and he's right at the league average from both inside the restricted area and the rest of the paint. Koufos was actually somewhat respectable from mid-range, but that's still probably not a shot you want him taking on a consistent basis, especially considering that the 35 percent he shot from that area last season was his career-best by a decent margin and could be the result of a limited number of attempts. 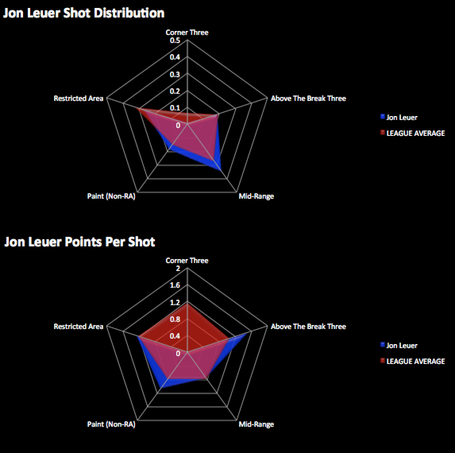 I want to preface this section by saying that I'm the unofficial president of the Jon Leuer fan club, so take anything I say with a grain of salt, but just look at how awesome the Johnny Badger was last season! 1.5 points per shot on above the break threes, and this isn't a Z-Bo situation where he only attempted two of them. Leuer drained 23 of his 46 non-corner three-point attempts last season, and was also excellent in the paint, both inside and outside of the restricted area.

With the departure of Ed Davis and rookie second-round pick Jarnell Stokes still needing to prove himself, Leuer should have the opportunity to become a regular member of the Grizzlies' rotation next season. If he can put up numbers even close to the ones he put up last year, he gives the offense a ton of spacing and opens up the door for some really interesting lineups. Above I already talked about Gasol perhaps needing to cut down on the mid-range attempts. If the two take the floor together and Leuer is a legitimate three-point threat night in and night out then Gasol could work down low in those lineups, and there would still be lots of driving and cutting space for a guard like Tony Allen who isn't much of a shooter but still has the ability to be productive when given the necessary room. Leuer has a skill-set unlike anyone else on the team, and if he can put forth an effort similar to last season's in a much larger sample size then he can become an extremely valuable offensive weapon off the bench.