After the Grizzlies acquired Jarnell Stokes by way of a draft-night trade with the Utah Jazz, the Young Bull of Beale Street will look to make an impact during in his rookie season.

On draft night the Memphis Grizzlies made a splash when the news broke that they were trading a future second round pick to the Utah Jazz in exchange for the 35th selection of the evening, which they used to draft University of Tennessee power forward Jarnell Stokes.

The trade yielded a sort of homecoming for Stokes, who was born in Memphis and played his high school ball at Southwind High School. His local popularity took a bit of a hit after he committed to Tennessee instead of the University of Memphis, but considering the buzz felt around the Bluff City the moment the trade was announced, it appears that all wounds are healed and fans are eager to see Stokes don the Beale Street Blue.

Due to his back story, it feels like expectations are relatively high for Stokes, but it's important to remember that he's a second round pick. So what are reasonable expectations for Stokes this season? First, let's break down the strengths and weaknesses of his game.

Perhaps Stokes' best trait is his motor. He was one of the best rebounders in all of college basketball last season, hauling in 10.6 boards per game, and whether it's hunting down a rebound or hustling for a loose ball, he typically plays as hard or harder than anyone else on the floor. In addition to his motor, Stokes was also one of the strongest players in the country during his time at Tennessee. Combining those two strengths, he could possibly be a legitimate force on the blocks from his first day in the NBA. Stokes has the physical tools to compete in the league right now. 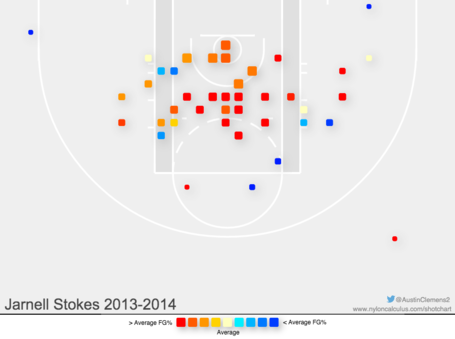 *Disclaimer taken from Nylon Calculus, where these shot charts are hosted: Shot location data is not as accurate in the NCAA as it is in the NBA. This can sometimes lead to strange artifacts, like boxes that probably consist of 3-pointers appearing inside the arc. Also, shot location is not tracked for all games. Games between ranked teams are most likely to be tracked, so players who frequently play against other ranked teams are likely to have the most tracked shots.

Another strength is that Stokes was very efficient, shooting 53 percent in his final college season, and shooting over 52 percent in each of his three years at Tennessee. The vast majority of his work is done in the paint, although he has shown some flashes of a mid-range jumper that could potentially become a more permanent staple of his offensive arsenal if he continues to work on it. Stokes has a few post moves and hook shots that he can use with his back to the basket, and he can attack the rim off the pick-and-roll as well.

Rounding out his offensive skill-set, Stokes has a knack for getting to the free throw line. He averaged 6.2 free throw attempts last season, and 5.9 during his sophomore campaign. While he's good at getting to the line, there's still room for improvement in terms of actually making his foul shots. He shot 69.6 percent from the stripe during his junior season, and was just a 62.8 percent foul-shooter for his collegiate career. 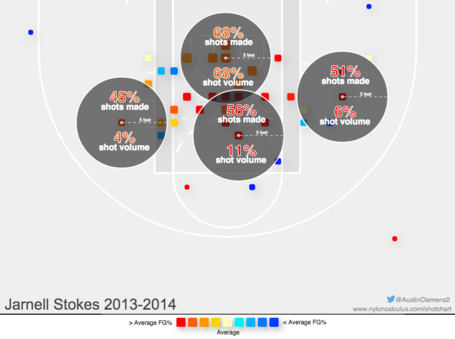 Probably the biggest weakness Stokes has is that his skills are mostly limited to the paint. He's been working on adding a mid-range jumper to his game, but unless he's made significant progress in that area over the summer, it's most likely not a shot we should see from him this coming season. He also has some defensive struggles when forced to leave the paint, and his pick-and-roll defense is especially poor.

As far as Stokes' potential is concerned, if he has any dramatic improvement it will likely come on the offensive end of the floor. He's slightly undersized for the power forward position at 6'8", and he's also a little bit slow, which definitely puts a ceiling on how he projects defensively.

Stokes makes the most of any playing time he's given at the start of the season and emerges as the team's fourth big man behind Marc Gasol, Zach Randolph, and Kosta Koufos. He sees roughly 10-12 minutes of playing time off the bench each night, serving as a spark plug to bring in energy and rebounding. Offensively, he gets most of his points by cleaning the glass and sticking back easy opportunities. He averages something like six points and four rebounds and his energy and motor make him a fan favorite.

Stokes gets a slow start out of the gates and spends some time in the D-League. Meanwhile, Jon Leuer becomes a staple of the Grizzlies rotation, making it difficult for Stokes to get any meaningful NBA minutes in his rookie season. He ends up spending a significant portion of the season in the D-League, and his NBA playing time is limited to garbage time in blowouts.

Somewhere in between those two, but closer to the ceiling. Stokes might spend a stretch or two in the D-League, but he's mostly in Memphis fighting for minutes with Leuer. Dave Joerger decides to deploy Leuer in lineups with Tony Allen, Tayshaun Prince, or Nick Calathes to make up for lost spacing, while Stokes sees minutes when there's more shooting on the floor. Stokes gets his fair share of DNP - Coach's Decisions, but overall he's seen as a promising player that comes up huge off the bench on a couple of occasions.