Is Marc Gasol Improving his Game or Just Getting Fit?

With Spain out of the FIBA tournament, it's time to see if Marc Gasol is improving with the eve of Grizzlies training camp upon us.

Share All sharing options for: Is Marc Gasol Improving his Game or Just Getting Fit?

There are many, such as myself, who have been playing close attention to Marc Gasol’s play over in Spain. With the thought of Marc’s free agency looming, most of Grizz Nation can’t help but analyze if Marc Gasol is improving or declining as he will soon enter his thirties. Plus, he has the added pressure that this is a contract year for him. And now that Spain is out of the FIBA tournament, it's time to take a look at Gasol. Is he getting better, staying the same, or becoming worse?

Well, I have some great news.

Marc Gasol is getting better.

And a lot of this is due to his improved physical fitness. Just check out these pictures: 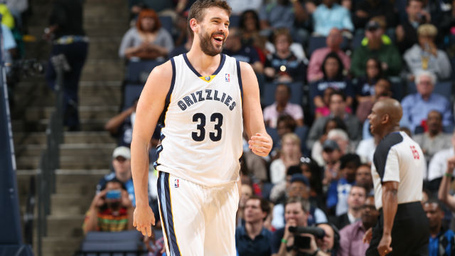 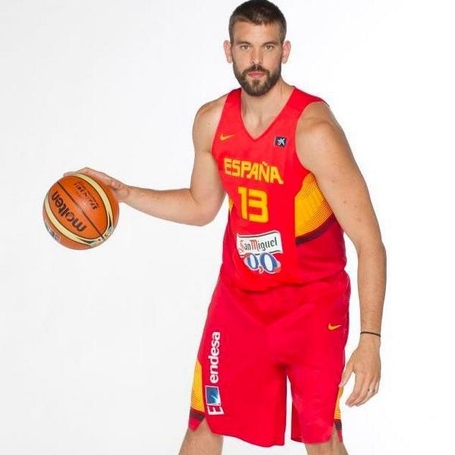 The point is, Marc appears to be in the best shape he’s ever been. In fact, he’s in incredible shape.

During FIBA, Gasol averaged 2.1 assists. While this isn't an insane number, his passes have been a thing of beauty. He’s even been making a few three’s. His other shots tend to consist of his famous elbow jumper, dunks, and lay ins. And let me add that he’s been throwing down some uncharacteristically authoritative dunks lately:

His nagging knee injury seems to be a thing of the past. But is Marc greatly improved from his last season? Well, let’s examine the stats (keep in mind the differing sample sizes). Last season, Marc averaged 14.6 points in the 59 games he was able to play. In FIBA, he averaged 10.1 in his 7 games. In terms of assists, he averaged 3.6 in the NBA and 2.1 in FIBA. Collectively, he had 15 of them in the tournament. His continuing tendency to be unselfish is obvious by the terrific passes he’s been delivering. On the other hand, there are many who want Marc to become more selfish and take more shots. Unfortunately, (and fortunately) this just isn’t the way Marc is. He’s the best big man distributor in the league and a powerhouse defensive anchor. Most likely, he won’t change his identity this upcoming season. Just check out some of these assists to see what I mean:

In the rebounding department, he averaged 7.2 in a Grizzlies uniform last season and grabbed 6.3 boards during the World Cup. However, something it seems like Gasol has struggled with for a long time is boxing out. Many long, gigantic players think they can just reach for the rebound and fail to physically box their opponent out. Rebounding can be a trying and exhausting process. We’ve seen Zach Randolph go to work and grab some incredible rebounds. Maybe Marc will never be a physical rebounder, but this is an area where Marc could use to improve in. As I watched him in the loss to Spain, I noticed this problem as he would seem to stand halfway behind opponents when a shot was thrown up (he had 4 rebounds in the loss).

Does Big Spain need to be shooting more three’s? Before the FIBA cup, I might’ve not thought so. But in the World Cup, Big Spain’s shooting 60% from three (3/5). I know this is an extremely small sample size, but I’ve watched Marc shoot some of these three’s. If it’s wide open, he doesn’t seem to be afraid to take the shot. He takes them sparingly, but he makes them count. Whether this trend continues remains to be seen, but I’m definitely not against cheering "Big Spain for 3!" on a more regular basis. As a total, he made 18.2% of his three’s last season.

By the way, Marc seems to actually be running during these FIBA games. Like, I’ve seen him sprinting on a fast break. Did I mention he's in the best shape that he's ever been in?

During last season, Marc Gasol’s efficiency average was a nice 18.2. In his first six performances his average was 19.3. But due to a bitter finale, it dropped to 16.7 Truthfully, his last game was disappointing. While he had had solid performances the past 6 games, he only have 3 points in the loss to France. And while I loved watching Marc play, I'm glad that he'll be returning to Memphis soon and be injury-free. As I'm sure Marc isn't happy with his ending in FIBA, I hope he's ready to get back in a Grizzlies uniform and go win a championship.

His field goal was an astounding 61.1% in FIBA, but he’s only taken 36 shots. This again brings up his tendency towards unselfish play, where he would rather make a pass than take an open shot that he can definitely make. And while we love to criticize him for it, it’s always what we love about him. While playing in FIBA, Marc maintained much of his previous form, while seeming in much better shape. Again, he only played 7 games in this tournament, so keep that in mind. But these stats are definitely encouraging for any Grizzlies fan. My prediction is that Marc will make the All Star team this year. And if he keeps the kind of performance that he’s been dishing out in FIBA (excluding the last game, of course), there seems to be a great chance of that.

But as for me, I’m thrilled and optimistic we’ll be seeing a better Marc Gasol this upcoming season. And with football season upon us, the NBA season is just around the corner. Can't wait to have you back, Marc.