He's in a contract year. Ed Davis is gone. Minutes are available. Opportunity exists. It's time to shine. Kosta Koufos is ready.

Before Denver acquired Darrell Arthur and the draft rights to Joffrey Lauvergne from the Grizzlies in June 2013, Kosta Koufos not only started in 81 regular season games in his second season with the Nuggets, but also set career highs in points per game (8.0), rebounds per game (6.9), blocks per game (1.29), and minutes per game (22.4).  His reward? Being shipped to a Memphis team whose starting rotation in the post was (and is) already set.  The Grizzlies' reward? A vital piece to the bigger picture of the overall post rotation.

Memphis got the better end of that trade, both on paper at that point in time and after one season in the books.  Even though the statistics dropped, Koufos maintained his level of efficiency and work-horse attitude last season, despite his reduced role off the bench. No more contending with Ed Davis for minutes.

His contract year has arrived.  If he has another solid season backing up Marc Gasol and Zach Randolph in the paint, he won't have to worry about Memphis shipping him somewhere else - the control will shift to him.  LaMarcus Aldridge is happy in Portland; Kevin Love just joined LeBron in Cleveland; and Gasol will stay in Memphis (hopefully).  Therefore, quality big men will be a premium next offseason.  Does Koufos need any more incentive to finish this contract out on a high note?  The time is now.

The following shot chart provides all you need to know should you ever wonder where you might find Koufos on a basketball court: 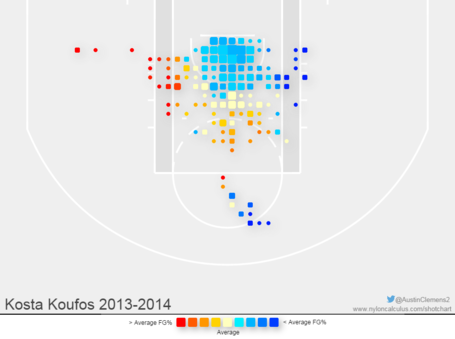 Apparently, he became a little more bold in throwing up shots around the charity stripe last year, because his shot chart from his last season in Denver shows him sticking closer to his home around the basket: 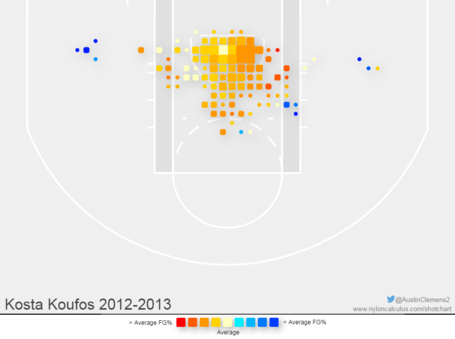 From an individual standpoint, Koufos provides two key elements that are basic essentials to any type of success derived from living in the paint:  rebounding and defense.  He was second on the team last season in offensive rebounds per game (2.0) and third in blocks per game (0.89).  His technique and footwork allow him to finish possessions efficiently and effectively, whether he is on the receiving end of a penetrate-and-dish, through an offensive rebound put-back, or by blocking and altering shots on defense.  He refuses to back down from physicality and can set solid screens to set up Conley drives or long-range shots for shooters curling at the wing or sprinting to the three-point corner baseline spots.

From a team standpoint, Koufos gives the Grizzlies one of the most desired commodities during a long NBA season - rest for Gasol and Randolph, as well as valuable minutes during that timeframe.  Rest was a point of emphasis in Pat Riley's plan for Dwayne Wade last season.  We all know Gregg Popovich is the master in the observation of his elder superstars' rest level.  Any time Koufos can come in and provide valuable minutes while Gasol and/or Randolph rest, the Grizzlies will be hard to contend with over the course of the NBA season.

Grizzly Bear Blues' senior writer Joe Mullinax wrote a great piece a couple of months ago on how Koufos can emulate Gasol in order to improve and perfect his game this season.  In this article, he discussed two critical areas of his game that need to be enhanced:  his passing and his jump shot.

How does this improve?  The shot charts above show where Koufos tends to dwell.  He should look to be at the high post position with the ball on multiple occasions during a game.  This will allow him to gain a needed familiarity and a higher confidence level in developing his game farther out from the basket.  In turn, Koufos will gain more experience in improving his court vision from that position, watching where cutters spot up for open looks at the rim or for backdoor drives down the baseline or in the lane.

If opposing centers study film on Koufos, they should know that if they limit what he can do in the paint, then they have neutralized his strengths.  To keep those defenses honest, it's important for him to expand his shot selection to some degree.  There shouldn't be an expectation of stretching that range to a large degree, especially not to the three-point line, by any stretch of the imagination.  His 2013-14 shot chart above shows he has spread his shot attempts out a little since joining Memphis.  Nevertheless, an improvement in shot range will only make Koufos more versatile on offense.  Additionally, he must look to become better at free throw shooting, so that he can enter the game in crunch time in the event Gasol and/or Randolph foul out.

This is the year of Kosta Koufos.  Understanding that this is his contract year, Koufos soars to career highs in all categories, even while still coming off the bench, averaging almost 10 ppg, 8 rpg, and 1 bpg, while improving his free throw shooting.  His minutes increase exponentially with the loss of Ed Davis; therefore, he makes the most of his bigger role off the bench.  His fantastic play gives Gasol and Randolph more games off, saving them for the stretch run and playoffs.  Then, a more lucrative deal awaits at the end of the Grizzlies' championship season.

Not too bad of a ceiling, huh?  It couldn't get much better than that for Koufos. The time is now.

He could arguably represent the largest range between the ceiling and the floor of any player on the Grizzlies' roster this season.  If he only averages around 5 ppg, 4 rpg, and 0.5 bpg after a quarter of the season, then the Grizzlies could find themselves in some trouble.  Jarnell Stokes could potentially jump over Koufos at some point after that, should this occur.  Jon Leuer could step in immediately, but then the second unit would be left without a true big in the paint. Leuer can be used in post-ups in some matchups, but he might be more regarded as a stretch-4 with three-point specialist qualities.  All in all, Koufos' sudden downfall would force more minutes out of Gasol and/or Randolph in order to stay in the playoff hunt in the brutal Western Conference.  With Ed Davis gone, minutes are up for grabs. Needless to say, it would be difficult to overcome a fall-off in production, should that occur.  The time is now.

Koufos is going to reach close to those ceiling goals.  Because he's in a contract year, there is all kinds of incentive to have an outstanding year.  While opposing teams focus on (and dread) the physicality that Gasol and Randolph bring on a nightly basis, Koufos slides under the radar and quietly (but not quietly to Grizz fans) improves his game on all levels.  The free throw shooting might continue to be suspect.  He's never had to worry about a heavy dose of distributing assists from the high post, so that might be a reach in expectation.

However, make one more note concerning his history.  Do you know how many times Koufos has missed the playoffs during his six years in the NBA thus far?  Once - his rookie year with Utah.  Look for a big year from Kosta Koufos and another playoff run in his future.  The time is now.