Your weekly look into all things Memphis Grizzlies, the NBA, and Life, the Universe, and Everything Else

Before we get started this week...

As I mentioned last week, Ryan Adams' S/T album was released last Tuesday and is glorious.

S/O to this site for the week of player previews we have had this week (Z Bo, Mike Conley, Jarnell Stokes, Kosta Koufus, and Tony Allen).  Anything to get us ready for real basketball is allllllllllright by me.

S/O to the other and better Matt here at GBB, Matt Hrdlicka, who wrote about the similar yet completely different situations with small market basketball teams in Atlanta and in Memphis.  Wise words.

The Grizzlies have invited Earl Clark to training camp-

Marc Gasol became a dad- Congratulations to Big Spain and family on the birth of his non-masculine child, Julia, earlier this week.  Fatherhood is amazing, as I am a fairly new dad myself.

It also sets up this year as an important year in Marc's career in the NBA.  There has been lots of coverage on Gasol's play in the World Cup and both dominant in wins and feeble in the one loss.  On this site alone this week, there have been articles bemoaning Marc's fitness in the past as compared to now, and his willingness or reticence  to be a dominant player.

This is a big year for Marc, with it being a contract year, and year for expanding his family, and a year to get back to the dominance that we all saw just one season ago before his injury last year.

Personally, I hope he is most excited about that little girl in his life.

THE NBA FIBA and the ABA

The US Men's Basketball Team-With the aforementioned Spanish National team out of the FIBA World Cup, interested has dropped from "ehh" to zero.  This team is kind of a B-team squad to the team that goes to the Olympics.  Just think, if you named the top players at each position, it would take you a few rounds to get to a player on the US team (save for Derrick Rose...but he is a special circumstance).  However, I did notice two little notes this week that did catch my eye.

JAMES HARDEN FALLING OFF A SEGWAY!

JAMES HARDEN FALLING OFF A SEGWAY!!!! 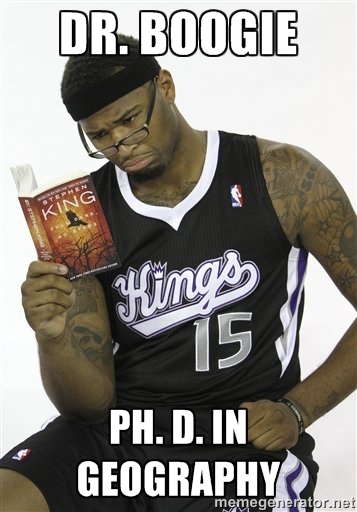 I am thinking about making it a semi-regular segment: Ask Dr. Boogie where something is and have him throw shade on you.

He needs to be in a Grizzlies jersey so bad...not this contract....maybe the next one when he can be gotten for cheap.

A Melancholy Happy Trails to Marvin Barnes-There is one trait about your author that I have not confessed as of yet.  I am a huge fan of basketball from the 1970's, especially the ABA.  I have read tons of books and have seen loads of documentaries about a very fun period of professional basketball.  I have even seen Semi-Pro at least a half-dozen times, and it is a terrible movie.  There are way too many glorious moments to point out here, but one of the more free-spirited and puzzling careers was one of Marvin "Bad News" Barnes, who died this week at the age of 62.

An athletic 6'8" power forward, Barnes attended Providence College from 1970-1974.  In his senior season, he and teammate Ernie DiGregorio would lead the Friars to a 28-4 record, with Barnes leading the way with 21 points per game and a nation leading 19 rebounds a game as well.  Barnes broke the single game record for scoring as well, with 52 points versus Austin Peay.  The college world was all set of a showdown between Barnes' Providence team and Bill Walton's UCLA Bruins.  In the Final Four against Memphis State, the Friars would go into halftime leading by ten.  But Barnes would injure his knee and would sit out the second half of the loss.

Barnes would be selected second overall by the Philadelphia 76ers, following Portland's drafting of Walton number one.  He would spurn the 76ers and the NBA for the American Basketball Association, where he would join the Spirits of St. Louis (Greatest team name ever...just ahead of the Memphis Showboats of the USFL and the Kentucky Colonels of the ABA).   He would average 24 points and 15 rebounds a games as a rookie with the Spirits, including some incredible match ups against Dr. J and the New Jersey Nets.  He would win Rookie of the Year in his first season as a Spirit.

There is a guy that I work with that saw every Spirits game except for one in the two years they spent in St. Louis.  He told me that when Marvin was on, he was one of the greats.  The only problem was that you never knew when he was going to show up.

Marvin earned his nickname, "Bad News," by having serious problems with authority and a whole lot of "just don't care."  When he was in high school, a group of high school kids he was with decided to rob a bus while wearing ski masks.  Marvin would later be arrested, because he was wearing his letter-man jacket...with his name stitched on the the front.

While in college, Marvin was involved in a incident with a teammate where Marvin received an elbow in his jaw, loosening his front two teeth.  Barnes would meet that teammate after practice and threaten him...with a tire iron.

As a pro Marvin marched to the beat of his own drummer.  He would be introduced to cocaine in his second year in the league, which emphasized his selfish demeanor along with his renegade spirit.  He would admit to using cocaine during the season, as well as using it during games in his later NBA career.  The flashes of brilliance that had marked his early career became fewer and fewer.

When the ABA merged with the NBA and the Spirits were no more,  he would float in and out of lineups, most famously with the Boston Celtics for thirty-eight games in 1978.  Dave Cowens, Barnes' coach while he was  in Boston, said that even though Marvin would rarely show up, he was the best player on the court.

Barnes would wash out of the NBA by 1980 and for a time was homeless in San Diego.   He would be arrested numerous times on possession charges, and would serve time in prison four times.  Eventually getting in a drug rehabilitation program, Marvin would get his life in order and become a mentor to kids living in his home town of Syracuse.  But a hard life had taken a toll on his body, and he passed away this week due to some serious health complications.

Bob Ryan has written a nice piece about his life and his potential squandered.  I like to remember the highlights and the flashes of brilliance instead of what could have been.

But mostly, I like to remember this story.   When Barnes was playing for the Spirits of St. Louis, the team was flying to Atlanta.  Because of the difference in time zones, the ticket read that the take off time from St. Louis was 8 PM and the arrival time in Atlanta was 7:58 PM.  Barnes refused to get on the plane, stating "I ain't getting on no damn time machine," and rented a car to drive to Atlanta.

Life, the Universe, and Everything Else

I know you, dear reader, come to this spot to read something light and easy, but this has been on my mind all week.

I don't know if you know this, but sports really sucked this week.  From the Ray Rice fiasco to the AP child endangerment case to another racist owner in the NBA, this has not been the best week for something that is supposed to take our minds off the troubles and travails of real life.

On Friday, the first fifteen minuets of the 5 PM Sports Center consisted of stories of child abuse (which to me is absolutely sickening), domestic abuse (more on this in a second), a racist owner and General Manager in Atlanta, and a failed drug test for PEDs in baseball.

There is something missing from those highlights.  Anyone wanna guess?

There is no sports there.

Thus, I have declared this week "The Week that Sports SUCKED."  And I primarily blame the NFL.  Not the game itself.  Not the teams or the players (although one team does come to mind).  Not the fans who buy the gear and go to the games and play fantasy football.  Not the pundits who yammer on constantly about the integrity of the NATIONAL FOOTBALL LEAGUE and the power and might of THE SHIELD.  Nor do I even blame Ray Rice, who is probably a dirt bag of the highest order.  The cross-hairs here fall strongly with the league.

While growing in mass appeal and popularity, I have not been a fan of the league for a few years.  My reasons have been vast:

So I have not been a fan for a while.  I watched one game last year...the playoff game between San Fransisco and Green Bay in the snow...mostly because I can not turn away from snow.  Now I have zero interest.

I am not here to force a debate on domestic abuse.  I am not here to call out a league that did the right thing by suspending Ray Rice for two games or two thousand games.  What I am going to say is that is league, the sacrosanct National Football League, wanted this Ray Rice thing to go away.  Suspending him for two games (while his team did nothing by the way) was wrong, and now fans have no idea how to feel about Rice and his playing time.

In my opinion, by either not viewing the tape, not acquiring the tape, or lying about viewing the tape of the horrific events in the elevator, the NFL conspired to condone an act so vile and disgusting as domestic abuse for the worst motivation: Avarice.  Greed.  Cash Money.  Plain and simple.

This is a league that is worth roughly forty bajallion dollars and could not risk not being worth forty point five.  And it did not matter who got hurt.  A commissioner...a team....a player...or his wife...who was sold out the most.  The league could have helped to protect her, not from the original incident, but from any future incidents in the cycle of violence, and sold her out too for thirty pieces of silver.

Because boycotts do not really work, I am declaring my disinterest in the NFL.  I hope you do too.