The Grizzlies' first round pick in the 2014 NBA Draft has shown flashes of being the dynamic scorer that Memphis has craved for years. The question is, with the log jam of veterans in front of him will Jordan Adams have an opportunity to impact the Bears of Beale Street this season?

NBA Draft night, June 26th, 2014. The Memphis Grizzlies, sitting with the 22nd overall pick with a glaring hole at Small Forward to fill, seemingly had options. There was Rodney Hood of Duke, the 6'9" swing man with a great 3 point stroke who could perhaps solve the problem after falling out of his projection of the late lottery. Then, there was Kyle Anderson, a fan and writer favorite also known as Slo-Mo whose long frame and unique skill set would have fit nicely in a roster who needs multiple ball handlers at different positions.

Rodney Hood. Kyle Anderson. Both would have filled a roster need. Then, Memphis threw most of Grizz Nation a curve ball.

It wasn't that Grizzlies fans and folks in the Grizzlies blog/Twitter/Media community didn't know who Jordan Adams was. He had worked out for Memphis and graded out highly on various analytic scales, a priority in player evaluation for the Grizzlies' Front Office.

However, as friend of GBBLive Matt Moore and Memphis' own Gary Parrish talk about in this clip...

RODNEY HOOD WAS RIGHT THERE! HE WAS THERE! SERIOUSLY?

While Matt Moore later said on an episode of GBBLive after the draft that perhaps an F+ was a bit too harsh, the fact remains that the Adams pick was questionable to a vast array of people. Uncertain athleticism, a Central BBQ or Gus' Fried Chicken binge away from weight issues, and, oh yeah, HE ISN'T A SMALL FORWARD. What in the world prompted this turn of events?

Aside from the previously mentioned analytics, the bottom line is this kid can score the rock, and he can do it in ways that the Grizzlies (even with the Vince Carter acquisition) struggled to. He is a terrific free throw shooter, shooting 83.6% for UCLA last season and an unconscious 95.5% during his Summer League run with Memphis this season. His three point shooting during the Summer League of 39% is extremely promising despite the small sample size, and he is a terrific finisher at the rim as this Nylon Calculus shot chart displays. 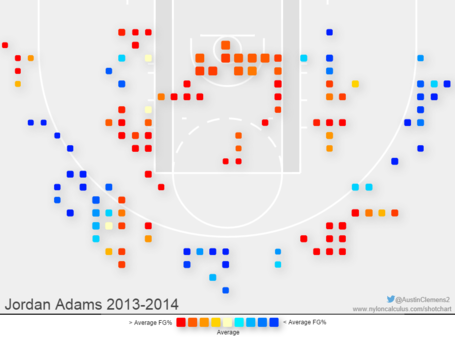 His strengths are the Grizzlies' weaknesses when it comes to offense. He could perhaps be a bench scorer a la Manu Ginobili, a strike of scoring lightning in the Grizzlies' sometimes barren offensive wasteland. He's no schmuck when it comes to defense, playing passing lanes very well and showing tremendous basketball I.Q. despite a lack of explosiveness. In the grand scheme of things, this pick could very well wind up being a home run, a tremendous success for Memphis in the future.

HE ISN'T A SMALL FORWARD.

For a team who supposedly sees themselves as a NBA Finals contender, selecting a 3rd string shooting guard does not scream "win now". Even more so now than on draft night, the Grizzlies have an epic log jam on the wing with veterans Tony Allen, Vince Carter, Courtney Lee, Quincy Pondexter, and...sigh, yes Tayshaun Prince all more than likely ahead of him on the depth chart. Clearly, the Grizzlies as currently constructed do not feel constrained by the traditional "Small Forward" definitions, and this is fine to an extent. The NBA is rapidly evolving into a league more concerned with speed, length, and explosiveness than the position definitions of old.

Between the five veterans mentioned above and Jordan Adams, however, only one of them is taller than 6'6". That would be Tayshaun Prince, who is without a doubt the worst of the bunch, but is still likely to see at least some minutes. It's a crowded wing in Memphis right now, and how Adams fits into that picture remains to be seen.

After a big trade to get a true starting Small Forward involving Tayshaun Prince's expiring contract and Quincy Pondexter, Jordan Adams gets more opportunity and makes the most of it. In 12 minutes per game after the trade deadline, Jordan averages 6 points per game on 44% shooting, including 86% from the free throw line and 38% 3 point shooting. Adams does indeed strengthen the Grizzlies offense in what have been some of their biggest weaknesses during the "Grit and Grind" era; free throw and three point shooting. He also is a sponge in terms of learning and listening to the veterans in front of him as they show him ways to negate his lack of athleticism on defense. Less of a defensive liability, more playing time heading into 2015-2016.

How He Gets There

The trade mentioned above, for whoever, has to happen to free up space and time. If the roster stays as-is, Jordan Adams will likely be competing with veteran and fan-favorite Beno Udrih as well as fellow Grizzlies 2014 draft pick Jarnell Stokes for an active roster spot from night to night (more on this later). A two- or even three-for-one deal provides opportunity, and Adams would be wise to learn what it means to be a professional very quickly and prepare for whatever chances come his way. This includes being physically prepared for the season; the NBA calendar is a grind. If Adams comes in to camp out of shape, that will hurt his chances. The weight/body fat provisions in his contract should enable him to come in slim, trim, and ready to compete for playing time.

The roster stays the same as Memphis looks to the off-season of 2015 and better cap space to solve the Small Forward dilemma. Jordan Adams, instead of bouncing between active and inactive on the main roster, is sent to the Iowa Energy to be the star player for the Grizzlies' new sole affiliation D-League affiliate alongside Jarnell Stokes, whose potential playing time is eaten up by new "stretch 4" Tayshaun Prince. Jordan Adams shines in the D-League, averaging 15 points on 48/38/90% shooting numbers while averaging 2.6 steals per game, all during a D-League championship run for the Energy.

How He Gets There

For a 22nd overall pick on a supposed title contender, there are worse floors that can happen in your first season in the NBA than being the star of a D-League championship run. Jordan Adams could very well do everything right in training camp, impress coaches, be in good condition, and yet still spend much, if not all, of his season in Des Moines. Rookies do not win championships in the NBA; veterans do, and it is hard to see Jordan Adams beating out not one, not two, but five veteran players for meaningful consistent playing time. A season with the Iowa Energy would strengthen the relationship between them and the Grizzlies and help Jordan with a transition year from the college game to the speed of the NBA.

Where Will Jordan Fall?

The type of trade that it will take to get the Grizzlies to move on from their (likely) 2015 salary cap freedom philosophy will probably not be on the table until the calendar turns to 2015. Therefore, Jordan Adams will get opportunities early in the preseason to contribute until it is eventually decided that it will benefit him more to go to Iowa and get steady minutes early in the season until the roster shakes out. Injuries can (and probably will) occur, meaning Jordan will be up and around the roster here and there, showing growth in his game both in minutes with the big club as well as his consistent role as "the man" in Iowa with the Energy. The Grizzlies will choose to ride the veterans however, and Jordan's time to consistently contribute in Beale Street Blue will have to wait until either a big trade or the 2015-2016 season.

No, Jordan Adams is not a Small Forward. What he is, though, is possibly the answer to the question of how the Grizzlies offense will evolve as the Grit and Grind era slowly fades into the history books. When he gets the chance to perhaps begin that transition will have more to do with the front office's plans for the future than Jordan's preparation for the upcoming campaign, at least in 2014-2015. Whether it is now or in the future, opportunity will eventually come calling for Jordan Adams.