With the partially reconfigured roster and the hopes of a better season, can Courtney Lee play the role he needs to play? Or will we be saying goodbye to him faster than you can say "Lee for 3?"

Share All sharing options for: The Courtney Lee Conundrum

We all remember saying goodbye to Jerryd Bayless not that long ago in exchange for a player from Boston named Courtney Lee. We all rushed to look at his stats and checked to see if the Grizzlies had gotten a fair deal. Then, the Grizzlies played the Spurs, in which Lee made his first appearance. In fact, I was there. I remember him shooting up a couple of threes and thinking that this guy was pretty good. He seemed to be just what the Grizzlies needed, which was outside shooting. In his 26 minutes of play, he had 12 points off the bench. For a while, he did seem to be what the Grizzlies needed.

In the month of January he averaged 12.9 on 53.7% shooting (this includes his three games with Boston). Marc Gasol returned that month, and the Grizzlies began to regain their footing. Then, Lee’s stats began to slowly drop. In February, he averaged 12.4 points but on 42.4% shooting. March came, and he averaged 8.5 during that stretch on 48.4% shooting. In the month of March, he had his first scoreless games since coming over to the Grizzlies (against Minnesota and Utah), which were back to back. Finally in the last game of the month he scored 19 points. His scoring went slightly up in April, and he averaged 10 points during the playoffs. Collectively, he shot 34.5% from beyond the arc last season in Memphis. This stat is going to need to go up, as the Grizzlies need all of the outside shooting they can get. On the other hand, his free throw shooting has been superb as he shot 90% from the line. So this brings us to the Courtney conundrum: can he help the Grizzlies?

Yeah, he can. But let me specify.

First, let’s take a look at his shot chart: 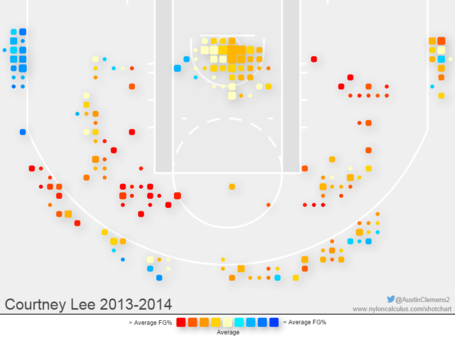 As you can tell, he shoots above average around the rim. Lee is a talented ball handler and seems to be able to finish well on his drives. However, a lot of this stems from his confidence level, which dropped in the latter part of February and most of March. But when he is confident, we can expect more smooth moves like this:

"Lee for 3!" This was my slogan for Courtney Lee this past season. Except, unfortunately his numbers beyond the arc dropped significantly the longer he stayed, it seemed. While with the Grizzlies, his percentage has been 34.5% on 142 attempts. Countless times I’ve seen him pass up open threes. His percentage and attempts need to go up. He’s got a nice stroke, and he can shoot a nice "pick-and-pop" shot when he chooses. Only, he doesn’t just TAKE THE SHOT more often than not. The Grizzlies have so many unselfish players, but I want Courtney to be a little more selfish.

To elaborate on his perimeter shooting, he’s good at cutting around screens and doing that "pick-and-pop" shot around the shoulder of the free throw line. According to his shot chart, he shot above the league’s average in this area in general. Be sure to check out his scoring capabilities here:

Most of all, Courtney Lee can plain out help stretch the floor. But he can’t even help out in this way if he doesn’t take more shots and improve his perimeter shooting, otherwise opponents will begin to catch on. I’ll say, I do particularly enjoy the Courtney Lee and Tony Allen combo. Tony Allen is a wonderful defender, but opponents don’t tend to worry about Tony Allen chunking up dagger three’s. But Courtney can be more of a threat. These two just seem like a good combo chemistry-wise and offensively. Chris Vernon got me hooked on this combo a while ago.

One question remains: will Courtney Lee still start in the place of Tony Allen? Will Joerger put him and Tony in the starting lineup and send Tayshaun Prince to the role of a bench player? Guess we’ll just have to wait and see.

1. Improve perimeter shooting beyond the arc

2. Step up his defensive capabilities

3. Increase and keep up his confidence as a shooter, then we might be saying goodbye to Lee in a few months or at the end of season.

If he steps up his game, however, he could play a extremely vital role for the team.

Personally, I’d like to keep cheering "Lee for 3!" this season.