Your weekly look at the Memphis Grizzlies, the NBA, and Life, the Universe, and Everything Else.

You know...after last week and all the suckage that we have had to endure in sports, it may be time for a cleanse - too much negativity is bad for the soul.  So this week I decided to drop my unofficial title of "Editor of Humor and Snark"* here at GBB and accept a new outlook of positivity and alacrity...at least for this week.

*BTW...this is a self-appointed title...which is like giving yourself a nickname...which no one actually has to call you or even acknowledge exists.  I have always wanted to be called The Hammer, and I keep waiting for someone to call me that.

But I realize after being this snarky for this long, I would need a rehab process.  And everyone knows that in rehab you need a sponsor.  And here is mine.

That's right...my role model for positivity is long time Memphis native, the Reverend Albert Green...in 1975...on Soul Train.   Why, you ask?  One, because I really love listening to Al Green.  Two, because I really like this song.  Three, because this looks so cool and like so much fun.

So that is what I want to express this week...my L-O-V-E of all things Grizzlies, the NBA, and the world in general.

So let's get some jive in our stride and some dip in our hip, and get started...

A little motivational music Mr. Green if you please...

Over-rated- Not this week, baby!

Brevin Knight- Brevin Knight may be the best analyst in the NBA.  Not the one with the most knowledge, because that belongs to Hubie Brown.  Not the most entertaining, that belongs to the Atlanta Hawks radio guy Steve Holman. Brevin is not even the best at math on his own set.  That honor belongs to Sean Tuohy, who always thinks the Grizzlies can get back into the game if we can just get the lead under fourteen by halftime.

But Brevin is the most honest guy in the booth.  He celebrates every good play with "homeristic" zeal. He has been known to call out the Grizzlies when they suck and especially when they are giving very little effort.   Plus, if we ever needed a back up point guard for a few minutes one night:

Rick Trotter-I have not been to a Grizzlies game since 2008, shortly after Pau was traded. Even though the game has changed since then, one thing has remained the same: Rick Trotter.

Rick is the man.  And he belongs on any Grizzlies fan love list for the following phrase:

Bearded Players- When I lived in Memphis, I was in school (I'm in school AGAIN now), but then I had a semi-professional job - so my appearance had to be neatly shaven and fairly clean cut.  Of course, I utterly rebelled against that...I grew long Elvis style sideburns down the side of my face.  Since leaving Memphis for the odd confines of North Alabama, I have become a practitioner and an admirer of the bearded arts.  I had no idea there was such a beard culture.  My favorite saying about beards is a t-shirt for children that reads: "If you have a father without a beard, then you have two moms."

Anyway, one of my favorite things about the NBA is the proliferation of beards.  SO, let's celebrate this by naming the top five beards in the NBA, an award that we will call the "Bill Walton". 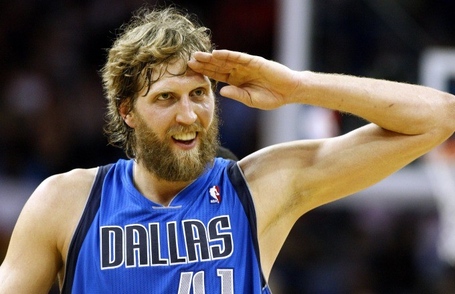 This was two seasons ago.  The Mavs were woefully under .500 that season.  Led by Dirk, the team decided that they were not shaving until they had a winning record.  This beard would be the obvious winner if he had kept it since then.

Shut it down indeed...

Good coverage for a tough player and a guy who usually plays well against the Grizzlies.  Although I believe sometime we over-rate guys with braids and dreadlocks as "tough" or "high-energy" players, this beard is stout.

Thick and wonderful...and wayyyyy better than his brother's.  Pau has fifteen year old teenage scruff that is splotchy and weird and looks like it smells. CONTENT DELETED FOR BREAKING THE SNARK RULE! 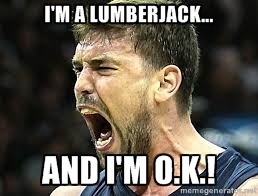 There is not a single player on this list that I would not have on the Grizzlies, and Birdman is no exception.  Miss the Mohawk though.

And the winner of the Bill Walton Award for the NBA's best beard....

No surprise here.  I am pretty sure that I over-rate Harden because of his pharaoh-esque beard, but I don't care.  This beard is the bomb.  If he had a 70's style afro too, there is not a player on the Grizzlies I wouldn't give up to get him.

Charles Barkley- Now how can I under-rate a hall-of-fame player, a member of the dream team, and a part of the best show about the NBA on T.V.?  Seems stupid.

What I want to say is that I love how Barkley talks about the NBA.  Chuck loves him some NBA.  It's a job that he is great at and is highly paid for, but I always feel like Barkley would just sit around and talk basketball for free if he was not on television.  Barkley is hilarious, and he always speaks his mind.  He finds a nice balance between realizing that the NBA is a game and a business.  Plus, viewers can tell by the way he talks about the NBA that he watches a lot of basketball.

I remember last season when the Grizzlies were on ESPN against the Knicks early in the season.  Magic Johnson, who was still on their show for some reason, was pontificating about the upcoming challenges for the Grizz that season.  Well...let me correct that.  Magic was droning on and on and on about the Knicks, and eventually had to come back to the other team in the game that night.

Anyway, Magic said that the changes to the roster had shifted the Grizzlies' talent level.  He then went on to say that now that O.J. Mayo was gone, Tony Allen was going to have to step into the starting lineup and really take over games.  Astute observation...

Tony Allen had started over O.J. Mayo the season before.

It seems like a majority of guys who are on television know very little about the NBA outside of Lebron, the Knicks, and the Lakers.  And that is understandable, because those things are important to T.V.

Chuck manages to cover all the bases.  He may say your team sucks, but he has at least seen that they do.

Life, the Universe, and Everything Else 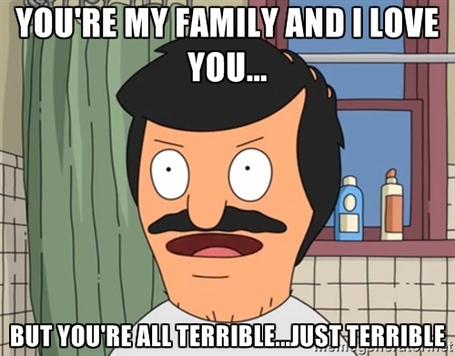 Love Bob's Burgers....something everyone should be watching.

This is essentially the entire plot of Everybody Loves Raymond, the worst show ever made.  But I could not disagree more.  My family rocks.  They are the biggest supporters of my life.  I know every week that at least one person will read my column, my wonderful wife, and that as soon as my son learns to read, he will too.  Plus, my father is a big supporter of my writings, and we have been talking about sports together for years and years, and he still is not sick of me.

So I wanted to share a could of things that I love about my family.

I love watching sports with my wife 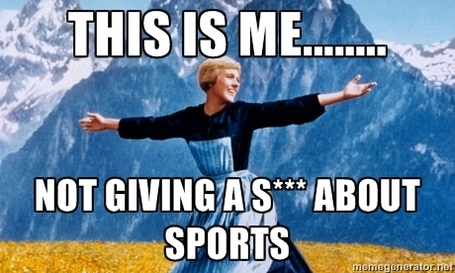 My wife does not know diddly about sports.  She has never been interested.  When we started dating I asked her if she liked sports, and she said she vaguely knew about Kentucky Wildcat basketball.  Mostly that their uniforms were blue.  So when the Grizzlies are on, or some random hockey game is on, she is sitting beside me on her phone, on Pinterest or playing Plants. Vs. Zombies.

However, every so often she will look up and make the most groundbreaking observation ever made about what is going on.  Case in point:

He's a tough tough guy.  At the end of a playoff series in which the Bruins lost last season, Lucic told every player on the opposing team "F@&% you...I'll get you next year."

My wife looks up after the scrap and says, "I don't think I would want to mess with him."  Wise words.

We have fun.  By the way...my wife would want the readers to know that she became exceptionally proficient at recognizing the Grizzlies while the games were going on, no longer having to rely on asking me who each player is.  This I consider one of my best teaching moments.

My son wants to be just like "Uncle Z-Bo"

My son is almost seventeen months old.  At this age, I think they learn a new skill every 4.5 seconds.  Last week his focus was on trying to sit down on something, instead of just plopping all his body weight down on like a chair or something.

Anyway, the process of him doing this is really cute.  He sticks his butt out really far, and holds one hand in the air, like he is Z-Bo in the post asking for the ball.  It's adorable.  Well, he has started doing this to the dog, our German Shepherd mix.

My son is already learning box-out skills and rebound discipline.  Maybe he will be the top pick in the 2032 draft.

Oh...and he always dances when Al Green is on, so this column will probably make his day.