He's one of Wisconsin head coach Bo Ryan's favorite players. Wisconsin standout Frank Kaminsky wants to be him. He has the knowledge, skill-set fundamentals, and athleticism to compete at the NBA level. Will Jon Leuer make the most of his opportunities this season?

If his last name was "Plumlee," he would be thankful - either because his college coach was the head coach of Team USA or because the Suns don't really have great options at center at the moment.  If his last name was "Zeller," he would either be fighting for playing time in Charlotte with another Indiana power forward named Noah Vonleh, buried on the bench in Boston, or reminiscing about his glory days playing at Notre Dame.  If his name was "Matt Bonner," he would be thankful that his boss has always been Gregg Popovich - otherwise, he might not ever know what it would be like to step foot on an NBA court.  If you're going to argue that Kyle Korver, J.J. Redick, and Jimmer Fredette are better shooters, then I might take his athleticism over those guys.  Swap that argument's points if you throw David Lee and Josh McRoberts at me.  If you bring up Chandler Parsons and Gordon Hayward...ok, I'll give you props. But, I will still take the odds that he won't sign his next contract in a bar, nor will he be overpaid just because an underachieving team needs him really badly...(who would blame anybody for taking $63M over four years though, honestly...)

We all know that there are not too many white, American-born players currently in the NBA.  And Jon Leuer could be just as good as any of them.  Allow me to reiterate, right here, a catchy description given Leuer by Grizzly Bear Blues writer Grace Baker:  "The Embodiment of a White Baller."   He was the "go-to" guy during his days under Bo Ryan at Wisconsin.  "Johnny Badger" is now the benchmark that all current and future Wisconsin players measure against (even current Wisconsin standout Frank Kaminsky).

The good news for Leuer is that James Johnson signed with the Toronto Raptors during the offseason.  Why is that such positive news?  Minutes.  The negative?  As long as Dave Joerger is the coach, Tayshaun Prince will hang around.  So, while the Grizzlies look at a potential shooting guard rotation of Tony Allen, Courtney Lee and Jordan Adams at one wing spot, the small forward rotation looks like it might consist of Vince Carter, Prince, Quincy Pondexter, and Leuer.  Although Grizz fans are justifiably excited about what Carter brings to the table, he and Prince have age and leg mileage going against them.  The "Q" in Quincy is personified irony in that he's a big question mark for the Grizzlies this season - we don't know what we can, or should, expect out of Pondexter.  Leuer could also end up being more valuable by backing up Zach Randolph as a stretch-4.  What does all of this potentially suggest?

Minutes.  A chance.  A larger piece of the playing time puzzle skewed by the sustained depth of the roster.  What will separate him from his competition?

His shot versatility is evident in his shot chart: 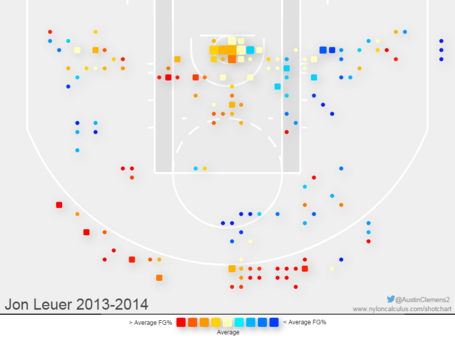 He can shoot from three-point land.  He can post up when needed or when a smaller defender guards him...or both. He is able to play defense in the post and can put a hand out on three-point shooters.  He has the size and athleticism to be an effective rebounder - on both the defensive and offensive glass.

However, his main strengths are those that will not show up on a box score:  his intelligence, his efficiency, and his consistency.  These are all trademarks of a Bo Ryan-coached basketball player.  Leuer has always been fundamentally sound - whether it be in rebounding or shot technique (especially in shot technique...).

You won't see him swish bombs like Fredette jacked up during his BYU glory days.  You won't see him add any flare to his dunks.  Yet, he is well aware that the points count all the same - style doesn't increase the value.  As part of an organization that preaches a team-first mentality, Leuer's style fits this team.

Maybe you could argue that his team-first strength might ultimately be his own personal weakness.  There isn't anything flashy about Leuer.  Yeah, he gets his job done when he's on the court.  But, nothing about him stands out among his competition.  He doesn't have that signature YouTube-posterize-a-player dunk.  From just a selfish fan's perspective, that's a weakness.

Much more importantly, he needs to look to stay aggressive when given his opportunities.  We can already trust that he will make good decisions with the ball in his hands.  He just can't shy away from the big play.  His Wisconsin days of draining the shot clock and throwing up threes at the shot clock buzzer are gone.  The tempo and pace of the NBA are far different from the tempo and pace of Wisconsin basketball.

He could also potentially add some bulk or size to his game, in order to play more aggressively (both on offense and defense) in the paint.  Hopefully this would not deter his shot mechanics or selection, but if Grizzlies coaches feel he could be best utilized as a backup to Randolph in a stretch-4 role, then there might be scenarios in which he would have to guard bigger power forwards.

As Joerger loses confidence in Prince, Leuer's minutes begin to increase.  As Randolph gets in foul trouble (and opponents utilize a stretch-4), Leuer's minutes begin to increase.  No matter the scenario, the ultimate path that leads to Leuer's ceiling will center around an increase in his playing time.  With that increase comes career highs in points, rebounds, and assists - let's say 8.0 ppg, 5.0 rpg, 2.0 apg.

Again, he's a smart, dependable player who will know what to do with the ball without making many mistakes.  He just needs the minutes.  If the minutes increase to around 17-19 per game, then we should see his other averages rise, as he gives Randolph or Carter some much needed rest during a game, as well as for the long haul of the season.

If anything, Leuer does not need to hit his floor this season.  His window of opportunity could ultimately be closing, even if he has always found himself on teams overcrowded with forwards (Milwaukee, Cleveland, and Memphis).

If his averages decrease to 2.0 ppg and 2.0 rbg; if the stretch-4's of division rivals (such as Terrence Jones, Boris Diaw, or Ryan Anderson) outplay him offensively and defensively; and if Pondexter reaches his own ceiling and takes away valuable minutes, then Leuer could hit his floor.  Even Jarnell Stokes could play his way into the rotation over the course of the season, eliminating all possibilites for opportunities.

It's really hard to say what Leuer's scenario will look like this season without knowing how much court time he will receive.  As much as one could believe that this is the year that Leuer will step up in a major way, it could also be believed that Pondexter, and eventually Stokes, could steal that time away from him.  We can't neglect Joerger's infatuation with Prince, either.

He has three years of experience under his belt now.  I can't see the Grizzlies giving in to other teams' stretch-4 system, as they can utilize their big power forwards in the post against smaller post forwards in such a scenario.  However, Leuer can come in and guard those stretch-4 forwards.  Otherwise, he would have to find minutes in a backup small forward role, but that might belong to The "Q," depending on how he plays to start the season.

There are many variables to where Leuer fits among this roster.  As mentioned earlier, his style and game can fit with this team.  Minutes are the key.  I hope the fan below has a better sense about the direction of Leuer's season than I do... 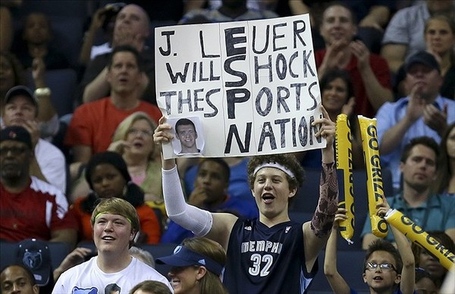