I've always loved reading mailbags and I've wanted to write a mailbag. All my favorite writers ever have done mailbags so I thought "Why Not?"

The problem is nobody asks me any questions, I don't blame them, so I had to make them up.

These are fake questions from real NBA players:

"Who should we get for pre-game entertainment on opening night?" Robert, California

Outakast, 1000% Outkast. Throw every dollar you have so I can see Outkast do a set in Memphis. Right now I am a tentative member of Team Pera, but if you did this I would become a full, card carrying member. Have Outkast come and do a set outside the Forum or if you want to go all out have it inside the Forum two or three hours before the game to do a concert.  Everyone would love you. Then have Rick Trotter do the National Anthem, which is always awesome, and you will be in business. That would be the best opening night ever.

"Where can I eat in Memphis to watch weight?" - Jordan, Memphis

Um. I...uh.. you should definitely think about going vegan. Nice job losing the weight that made me think you were an awful draft pick.

"What am I supposed to do with Michael Beasley?" - Zach, Memphis.

Help him not be lazy? It's impossible to make someone work that has never had to and just has no desire to. In college Beasley could just be awesome because he is a naturally talented basketball player.

He's the John Daly of basketball, he's always going to be around because of how talented he is, but he will inevitably blow it. i don't expect him to get out of training camp, but you never know Tony and ZBo could turn him around. I would love to see Beas bring the cornrows back and score 15 ppg off the bench, but that is fairly unrealistic.

Just don't punch him, unless he hits you then do you ZBo.

"How do I get the ladies of Grizz Nation to leave me alone?" Beno, Memphis.

I'll let you know when I find something that works for me.

"Am I going to get to play this season?" Jon, Memphis

Yes, unless Jarnell Stokes proves to be ready for consistent NBA minutes right away, Leuer is going to be the primary backup for Zach Randolph. Now that doesn't mean he is going to be seeing a good amount of playing time because Coach Joerger has shown he prefers to use the three man rotation of Gasol, Randolph and Koufos.

Thinking of Jon Leuer brings me to something that has been driving me crazy since last year. STOP ASKING PLAYERS IF THEY LIKE THEiR NICKNAMES. A nickname happens organically, it's not forced. I don't care if Leuer doesn't like being called Jonny Badger, I don't like it, but it was given organically. I don't care if Kevin Durant doesn't like being called Iceberg Slim, it's a great nickname and it fits. I don't like the nickname my friends have given me since 6th grade, but I know the rules. I only approve of three self given nicknames:

Otherwise, there is no giving yourself a nickname. Ever. Under any circumstances.

"Who would Grizz Nation like me to dunk on the most?" - Vince, Memphis.

I know Tony, I know. I love that fact that you feel the need to remind people.

And now the Ron Artest question of the week: 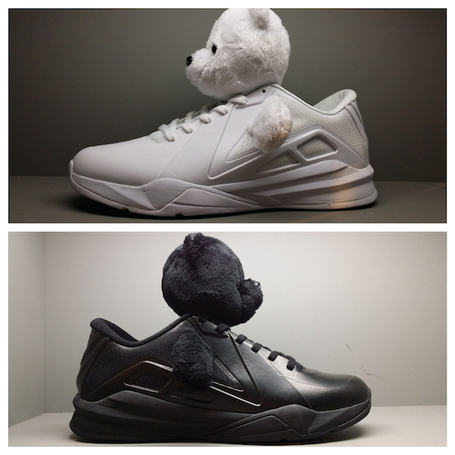 They look like you stuffed beanie babies inside some Chinese knock off New Balance's and decided to sell them.