The way Quincy Pondexter's 2013 went you would have thought Charles Dickens wrote "A Tale of Two Cities" famous opening sentence about ol' Q-Pon himself. After experiencing the highs of Western Conference Finals success and lows of being benched and eventually injured, 2014-2015 is all about responding for Quincy.

If Quincy Pondexter is a fan of literature, he likely sees the connection.

The opening line of the Dickens' masterpiece calls to mind the images of Quincy Pondexter from the past 16 months or so. There was the best Quincy that one could imagine in the 2013 Western Conference Finals, hitting threes like this...

and making fans excited for what the future held. His stats from the 2012-2013 playoffs were very impressive:

You know what, let's see that dunk again in Phantom Super Slow-Motion. It was awesome.

It looked as if Quincy was going to become a key cog in the Grizzlies machine, leading many to believe he may even start the 2013-2014 campaign as the starting Small Forward (including likely Q himself.) There were glimpses and glimmers of that Quincy early last season as well; there was the game against Boston early in the season in which he hit two big three-point shots, and of course the infamous "play me Joerger" game against the Brooklyn Nets, scoring 22 points on 12 shots (with 0 rebounds) in a loss.

Of course, there was plenty of bad for the player lovingly known as Q-Pon. That Brooklyn game, which should have been a launch point for a player who was enduring a slow start, was actually counter-productive. Disrespecting your new head coach is not a good way to get more minutes, and Quincy learned (hopefully) a valuable lesson in humility and self-control even in a frustrating situation. Even more frustrating than Joerger for Q was his play; check out his stats before his season ended prematurely due to a stress fracture in his right foot:

If Quincy is being honest with us and himself, he would say he didn't deserve big minutes with that kind of stat line. The rebounding number is particularly concerning; this is a wing brought in due to his ability to clean the glass, shoot the 3, and defend the wing at a high level. He did none of these things post-Western Conference Finals. His shot charts from season to season show drastic differences as well. 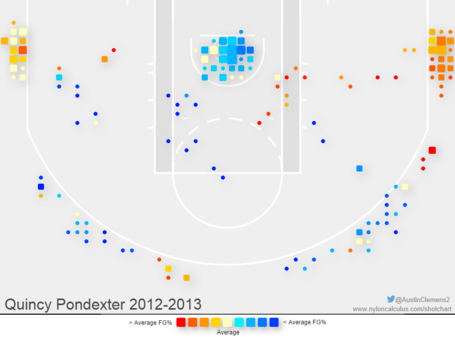 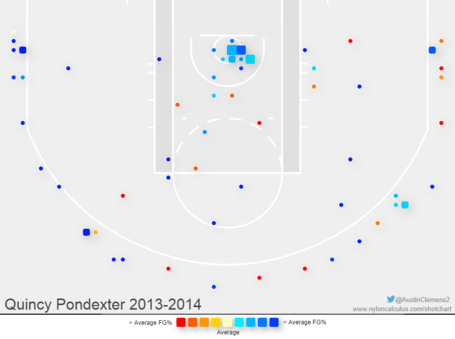 Of course Q's sample size is smaller in 2013-2014, but the lack of effective/efficient scoring and an inability to impact the game outside of scoring in that sample size is reason for concern heading into the 2014-2015. Factor in the obscene depth Memphis features on the wing and the fact that Quincy is coming off a pretty serious injury, and it isn't crazy to see Pondexter as a potential after thought on the Memphis Grizzlies, perhaps even trade fodder as the season moves on. Not what was expected when Quincy signed his extension before the start of the 2013-2014 campaign.

Although, on the other hand, Pondexter was darn near close to being able to play against the Oklahoma City Thunder in the playoffs last season. There is no questioning his work ethic either, so perhaps Quincy will come back better and stronger after the injury than he was before. He also clearly has a chip on his shoulder; with age and maturity comes understanding of how to apply that energy in a positive way. Quincy has the ability when on to push for not just minutes off the bench, but that starting Small Forward spot when he plays within himself and does what he does best - connect from down town and shut down other wings defensively.

Quincy begins the season coming off the bench, playing his role and 14 minutes a game, showing an improved dedication to rebounding and defending. After the Grizzlies get off to a slower than expected start, Head Coach Dave Joerger makes a switch in the starting lineup and inserts Quincy, who never loses the position the rest of the season. He averages 9.5 points as the starter, converting on 38% of his three-point attempts and upping his minutes to 26 per game.

How Could He Get There?

By being himself. Not the Quincy who thinks he is his boy Rudy Gay while playing outside of the system. Not the Quincy who mouths off to coaches and tries to be more than he is capable of being. The Memphis Grizzlies do not need to have Quincy become Paul George, or Luol Deng; all they need out of that Small Forward position is better production than they have received from Tayshaun Prince. Between Q, Tony Allen, and Vince Carter, this is more than possible, and Q has youth, length, and athleticism on his side.

Play defense, shoot the corner three, rebound the basketball. It truly is that simple for Quincy Pondexter.

After having some foot soreness in Training Camp, Quincy sees less time than expected in the pre-season and loses out on minutes to every wing on the roster, even Jordan Adams. Quincy sees several DNP-CD's next to his name and gets frustrated again, asking for a trade out of Memphis. The Grizzlies grant his wish, moving him and a 2nd round pick for either an expiring contract (Joel Anthony of the Celtics) or as part of a bigger deal (Tayshaun Prince, Q, and a 2nd Round Pick for Danilo Gallinari of the Denver Nuggets.)

How Could He Get There?

By not doing his job. So often early last season, Quincy seemed to force the issue, trying too much to drive to the basket offensively and gamble a good bit defensively. While Pondexter is talented, he does not have the capacity to do this at this point in his career. His game is still growing, so layers can be added, and perhaps that was what he was trying to do last season. However, for all the reasons outlined above he would be wise to stay within his role this coming season.

If he doesn't he could be out of town sooner than anyone thought.

Where Will Quincy Fall?

He will be somewhere in the middle, but closer to the ceiling than the floor. 16-18 minutes per game and 7 points per game is certainly obtainable, especially as part of a potential bench unit including players like Nick Calathes, Vince Carter, and Jon Leuer who can create and space the floor. His foot will hold up and we will see Quincy defensively back at the level we are accustomed to seeing him at.

Even with a good performance, a trade is still possible and Quincy's contract is cap friendly. If the right deal comes along, don't be surprised if Q is a casualty of the log jam on the wing.

Much of what has hindered Quincy Pondexter in the past has been out of his control. How a coach plays him and his injury are all things that he has to let go of if he hopes to grow as a player in the NBA. Control what you can control, Quincy; play the game within your strengths, give maximum effort, have a great attitude, and be a leader on the team, especially among the bench players. There is plenty of potential in what Quincy can bring to the Grizzlies, he just needs to make sure he does it the right way.

The best of times, the worst of times. Quincy Pondexter has seen both recently. It is up to him which one makes up his next season for the Memphis Grizzlies.