Share All sharing options for: Quincy Pondexter is the worst player on the Memphis Grizzlies roster according to NBA 2K15 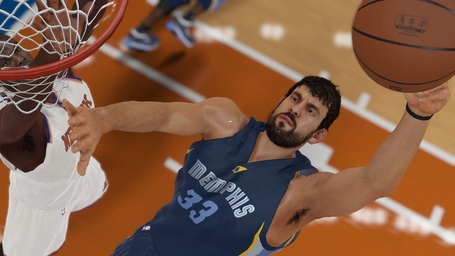 Shout out to Vuk for getting this started!

Where to start? It definitely makes sense for Marc Gasol to be the best player on this team, but he's actually tied with DeMar DeRozan, Kyle Lowry, Kawhi Leonard and Paul Millsap for the 30th best rating when stacked up to the rest of the game. I guess I can live with that, but I'd probably have him closer to 89-90.

I'm not sure that Zach Randolph should be rated higher than Mike Conley. We're talking about Conley, an elite athlete in the prime of his career, being rated lower than Randolph, a never-was-elite athlete in the higher end of the twilight of his career. If Mike doesn't get hurt last year there's at least a snowball's chance in hell that he comes up with an All-Star birth while continuing that insanely bitchin' level of play he had going. I think Z-Bo's good where he stands, but Conley should be at least 85.

Is Tony Allen better than Vince Carter? And in a video game? I think we're seeing a bump from his "best perimeter defender in the NBA" label whose fire was again stoked during last season's NBA Playoffs as TA smothered Kevin Durant. I know VC has some age on him, but you'd think his 3pt shooting alone would have him at least a point higher than Tony Allen.

The rest is all about right, although Koufos probably gets a knock because of lack of playing time. It's interesting that they have Udrih rated higher than Calathes (there's experience and savvy coming into the picture again.) But here's where things get totally fucked up.

The Grizzlies two 2014 draft picks, Stokes and Adams, are rated the same -- I can live with that, but they're both rated higher than Jon Leuer. Give me a break. Leuer gets absolutely no credit for the stats he put up last season and obviously no consideration for some of the guard skills he possesses.

But check out the next gaff -- NBA 2K15 has Quincy Pondexter rated as the worst player on this roster -- and that includes ranking 1 point lower than Jamaal Franklin, a player who is not currently on an NBA roster.

Now, I know QPon has some things to work on, and he obviously didn't play very well last season. But to rank him lower than a rookie 2nd round draft pick is pretty insulting. Some of you might remember how pissed off Quincy was last year when they rated him at a 61, so he's actually now rated 7 points higher, but I still expect him to find some motivation in being dead last on the Memphis Grizzlies roster.

What do you all think? What you keep or change around?