As GBB kicks off our series of player previews for the Memphis Grizzlies' upcoming 2014-2015 campaign it is fitting that the first player that will be profiled is Mike Conley. If the Bears of Beale Street are to overcome the very best of the Western Conference, Mike Conley must take yet another step forward in his development and rise to another level of offensive, and defensive, production.

In life, hard work often trumps talent when talent does not work hard. Coaches have used variations of that phrase and the quote above for years; having physical gifts just isn't enough. Countless names in towns, cities, and counties across the country can and usually do spark debate about how great they COULD have been if they had been more committed to their craft. One grade here, one workout there, one poor decision can mean the difference between a free education, a career as a professional athlete, a better life for themselves and those they care about. Every community has at least one "sad story" of talent wasted.

Mike Conley, despite a slow start to his career, is most certainly not one of those stories.

Ever since the Memphis Grizzlies drafted Mike Conley 4th overall in the 2007 NBA Draft, he has grown. His points per game and overall shooting percentage has improved or stayed the same every season he has been a pro except for one. He has done the same with his steals numbers, learning the ins and outs of the game in the NBA on both sides of the court. He is the cliche' sponge, soaking up experience and knowledge everywhere he goes and developing his game by means of the one strategy that guarantees growth: working hard.

As Conley and the Grizzlies enter the 2014-2015 season he will once again be counted on to showcase growth in his game. The man who will be 27 when the season starts is no longer that kid who arrived in Memphis 7 years ago. He is wiser, much more developed physically, and primed to enter the top playing window of his NBA career. How good can that prime be, however? How much does Memphis need Mike Conley to grow to be the NBA Finals contender they hope to be?

Mike makes the All-Star Game for the first time after averaging 20 points, 8 assists, 4 rebounds and 2.5 steals per game on 47% shooting overall, 38% shooting from 3 in 80 games played.

How Does It Happen?

First, Mike has to continue to get better at finishing at the rim. He got better at this last season to be sure. Here is his 2012-2013 Nylon Calculus shot chart compared to his 2013-2014 shot chart. 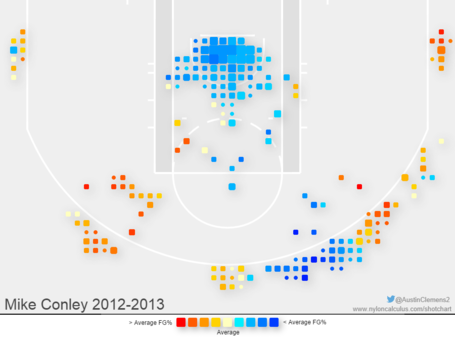 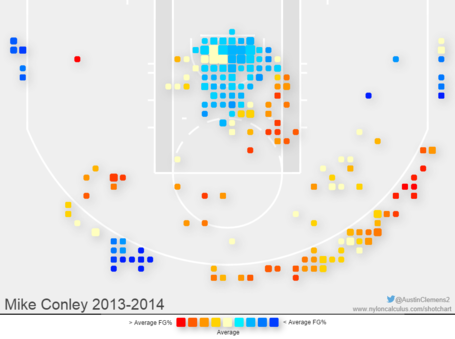 Much needed improvement in the lane. Compare this to Tony Parker, who Mike has talked about wanting to model aspects of his game after, 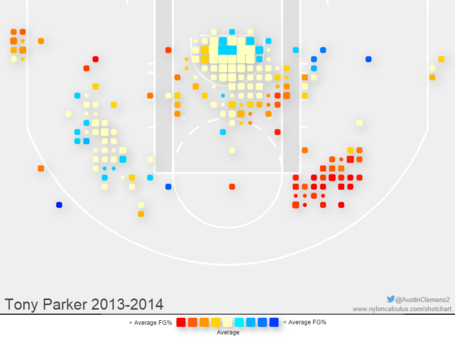 While Conley improved, there is still room for growth in that area of his game if he hopes to move into the upper echelon of guards in the NBA.

Even with better lane finishes, there are other ways that attempts in the paint can result in points. Conley, even with the increased attempts, still does not attempt nearly enough free throws per game. 3.8 attempts per game will need to be closer to 5 or even 6 per game if he hopes to make a jump to being a 20 point scorer. How? Showcase contact, use opponent's bodies and momentum against them, and force officials to make calls.

It isn't about flopping. It is about using your own body and your opponent's positioning to make contact more aggressive and apparent. An extra lean here and dribble there can make all the difference when it comes to drawing a foul.

The increase in assists will also depend on players like Vince Carter and Quincy Pondexter making more of an impact this coming season. Scorers on the wing last season were more dependent on catch-and-shoot scoring chances (see Miller, Mike). Pondexter and Carter are more athletic and more capable of scoring the basketball in a variety of ways. Better slashing and off-ball screening for these players will enable Conley to get more assists.

You need the ball to go in to get assist credits obviously. More Carter and Pondexter, less Tayshaun Prince, more assists and less missed opportunities offensively for Conley.

Mike regresses a bit, averaging 16 points a game on 44% shooting, 34% from three point range and 80% from the free throw line. He continues to average 6 assists per game, but only gets 1 steal and 2 rebounds per game with 3 turnovers in 60 or less games played.

How Does This Happen?

A lack of health. Mike Conley played in less than 80 games (aside from the lockout shortened season in which he played 62 games) for the first time since his rookie year in 2013-2014. Being banged up and missing time throws off team chemistry and timing and makes the Grizzlies more dependent on less-efficient, less-commanding players like Nick Calathes and Beno Udrih. It would force Dave Joerger to go back to the Z-Bo/Gasol inside-out well too often, meaning a more predictable Memphis offensive attack, one-dimensional scoring, and a loss of effectiveness.

Basically, if Mike Conley's health is in question, the success of the season will be in question.

Where will Conley Fall?

Somewhere in between, trending up toward the ceiling. While Conley's health may be a concern given his smaller frame, a positive of this roster is depth, especially at the point guard position. Once Nick Calathes' suspension is over 13 games into the season, there will be two capable back-ups for Conley who will be able to give him some much needed rest and perhaps even spot starts.

The next evolution of Mike Conley's game will be in getting to the free throw line more consistently. Teams will respect his driving and contact-drawing skills more as the season goes on, resulting in open kick-outs or dump passes to shooters outside or slashers going opposite of Mike in the lane. The two-man game between Marc Gasol and Mike will also help boost those assist numbers; look for Gasol to get to the basket more this season via quick slips to the lane or full rolls after a pick, forcing defenses to honor his new found improvements athletically.

Mike will also re-establish his defensive prowess through better understanding of how to use his gifts and experience to his advantage. Mike Conley is a veteran in the NBA now, and understands the angles and edges of the game better than he ever has. Using that knowledge, hand quickness, and lateral foot speed, Mike will be in a better position to defend players who have physical advantages over him, especially physically.

Experience, health, and a better Marc Gasol will mean a better Mike Conley, and an All-Star appearance for the starting point guard for the Memphis Grizzlies.

Experience is the teacher of all things.- Julius Caesar

Hard work pays off. So does experience. After two seasons of playing at a near All-Star level Mike Conley has both the experience and the willingness to work hard to continue to grow into a truly great NBA point guard. Conley's continued development will keep moving the Grizzlies forward in their journey to becoming a real NBA Championship contender.