Now that Zach Randolph has signed a new contract with the Grizzlies that should keep him in Memphis for the remainder of his career, he can focus solely on leading the Grizzlies to unprecedented heights on the court.

Zach Randolph has been an exceptionally busy man this offseason. He got married. He is taking care of a baby that is still less than a year old. Most importantly for Grizzlies' fans, he signed a two-year contract extension that should keep him in Memphis for the remainder of his career.

Last season, Randolph's future in Memphis was perpetually in doubt. He wasn't sure how much longer he would be around, and it seemed as if the front office wasn't certain how much longer they wanted to keep him around. In the end, it made the most sense for both sides to strike a deal to keep him on Beale Street.

Much has been made about the decline of Randolph's game over the past couple seasons, and rightfully so. However, he has long been the vocal leader in the locker room, and the importance of that role on a team with a head coach in Dave Joerger who is still just getting his feet wet at the position can't be overstated.

Finish Them: The Clippers, & The Kid Inside Us All

Finish Them: The Clippers, & The Kid Inside Us All

Of course, Randolph is not in full out decline, and he is far more than a veteran full of wisdom. He remains a key cog on this squad, and he still adds great value on the court that would have been difficult, if not impossible, for the Grizzlies to replace via free agency or other avenues this offseason.

Randolph was an interesting case study offensively last season. When Joerger replaced the oft-disgruntled Lionel Hollins as head coach, he had every intention to implement an offense that worked at a faster pace and got into sets quicker. Many immediately wondered what that meant for the lumbering Randolph. After a slow start to the 2013-14 season, it became starkly evident to Joerger that he will have to put his master offensive plan on hold while Randolph remains on the roster.

One of the more old school players remaining in the NBA, Randolph would likely be a misfit on many teams. Slug-it-out offenses that utilize two traditional post players at the same time are in rapid decline, as is the relevance of the mid-range jumper. Randolph has survived on both of these things his entire career.

None of that seems to matter in Memphis. Randolph has been the team's leading scorer and rebounder every season since he joined the team (minus 2011-12 where he played a mere thirty games due to injury), and the Grizzlies would not have experienced their recent level of unprecedented success without him.

Concerns surrounding Randolph's offense have little to do with how he fits schematically. Rather, the worries have everything to do with age and natural decline. He's still mean and strong as an ox, but his lift is completely gone. He struggles mightily against lengthy defenders, and that was no more evident than against the Oklahoma City Thunder in the first round of the 2014 NBA Playoffs.

The shot chart below reflects Randolph's struggles against length. His efficiency numbers were brutal around the rim last season, and he became more efficient the further he got from the rim, where the presence of lengthy shot blockers is not as prevalent.

It's safe to expect much of the same from Z-Bo this season in terms of scoring. He will struggle around the rim in terms of efficiency, but he will still get plenty of points down low by carving out space for himself to grab offensive rebounds which will lead to easy second-chance buckets. The mid-range jumper from the right side of the floor will remain his bread and butter. Decreased lift has hurt him less from mid-range given his high release and beautiful, signature rainbow shot. 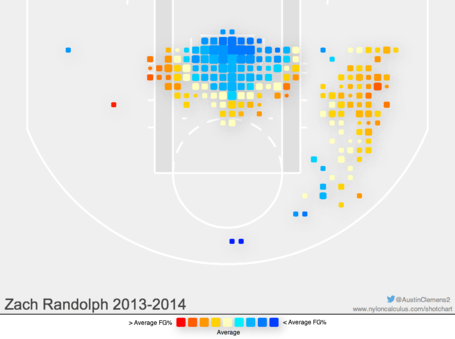 Randolph won't help much in the way of spacing or creating more three-point looks for a team that was last in attempts from deep last season. While having a more mobile, stretch four would be helpful to the offense, having a bull like Randolph has its own perks. When the Grizzlies offense bogs down, they can force feed him and let him create instant offense for himself. Plus, he remains enough of a force to draw frequent double teams, and he has the ability to pass out of it and hit a perimeter player for an open three. Every team needs a guy that can provide that, and no other Grizzly is able to make something out of nothing quite like Randolph.

Defensively, Randolph has his share of issues. His thick frame and old, slow body make it difficult for him to defend stretch fours away from the rim, and teams regularly exploit this weakness. He is particularly bad in the pick & roll, as his lateral quickness is akin to that of a sloth. This forces him to cheat and defend the pick & roll one of two ways.

First, he can hedge hard to try to stop the ball-handler dead in his tracks, but he is in deep trouble whenever that tactic fails and the ball is either delivered to his man for an open shot or if he was too slow to keep the ball-handler from turning the corner. Second, he can let the screener go and sag off in the paint to cut off penetration if the ball-handler rounds the corner. This causes problems for the Grizzlies too though, because guards will often just pull up and shoot a jumper before they get to Randolph, or they will deliver the ball to the screener for an open shot. Take a look at the video below if you want to see how not to play pick and roll defense.

In the post, he fares well against guys that are foolish enough to try to outmuscle him. He's not a guy that's going to get moved out of the way, but much like on the perimeter, shiftiness can beat him down low as well. Quick bigs with good footwork can do damage against him. That's just the brutal reality for a thirty-three year old big man who isn't as spritely as he once was.

Luckily for the Grizzlies, Marc Gasol is typically on the court with Randolph, and the Spaniard covers for a lot of his frontcourt partner's mistakes. He didn't win the Defensive Player of the Year award in 2011-12 for nothing. He's able to roam and give Randolph more time to recover to his man on pick & rolls and help in the paint when Z-Bo is clearly getting worked. Z-Bo isn't much of a threat to block a shot, but his man still has to be weary of what's lurking in the paint if he happens to work his way past Randolph and to the rim.

Despite his flaws becoming more pronounced each year, Zach Randolph is still a guy that's going to give you a double-double every single night. He provides a steady offensive presence that the Grizzlies desperately need, and he's a workhorse on the glass. Those two things will be integral to the Grizzlies success this season. All of this doesn't even factor in the effect his leadership has in the locker room.

After finalizing Randolph's contract extension, General Manager Chris Wallace summed up the impact Randolph has made in Memphis by labeling him as "one of the most popular Grizzlies in the history of the organization." He has never had more success than he has had in Memphis, and the Grizzlies have had their most successful seasons in franchise history with him playing a huge role. There was a lot of talk about both sides moving on, but two things are clear now that Z-Bo is here to stay. He still needs Memphis and Memphis still needs him.